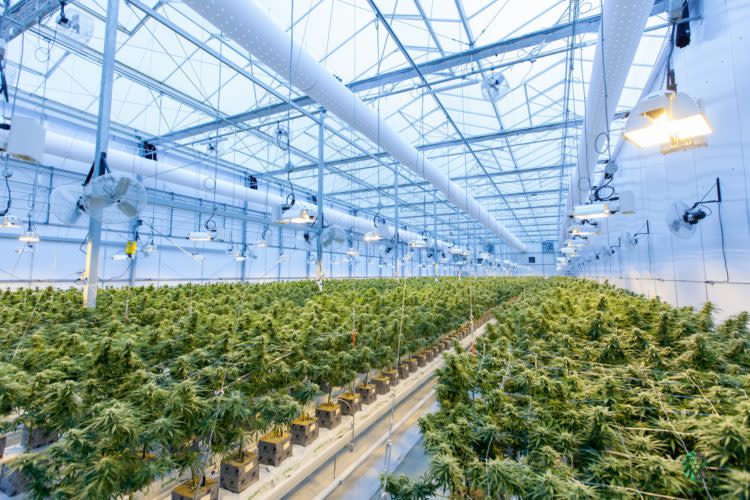 Canopy Growth Corporation (NYSE:CGC), The Scotts Miracle-Gro Company (NYSE:SMG), and Tilray, Inc. (NASDAQ:TLRY) are a few of the best companies to buy that have high exposure to the cannabis industry.

To say the cannabis industry and cannabis stocks have been a disappointment for investors thus far would be a huge understatement. With legalization sweeping across numerous U.S. states and all of Canada, the legal marijuana industry in North America was expected to be the next big thing.

While the industry is growing at a double digit rate and projects to do so for years to come, it has thus far failed to live up to the hype and achieve the growth rates that were expected of it.

The result is that most cannabis stocks are as much as 90%+ off their all-time highs. The Horizons Marijuana Life Sciences Index ETF, one of the benchmark trackers for the industry, is down by 86% from its September 2018 peak, and by 47% this year alone.

The Canadian legal marijuana industry has been particularly dreadful for investors, who have lost a projected a $131 billion on their investments according to law firm Miller Thomson. High prices, poor quality product, and uneven regulations on edibles and other cannabis-based products have plagued the legal Canadian industry, which has captured just 14% of the black market’s share since legalization in 2018.

The situation isn’t quite as dire in the U.S., which also has the added promise of additional markets opening up in the future as more states hop on the legalization bandwagon. Yet even there, cannabis companies are bleeding red ink due to high taxes and siloed production, as federal law prevents companies from transporting cannabis across state lines. In the first six months of this year, a collection of two dozen U.S. cannabis producers analyzed by POLITICO had lost $550 million on $4.5 billion in sales.

Despite the industry’s growing pains, it’s still easy to see the potential for big things down the line. And with cannabis stocks trading at absolute bargain basement prices, many for as little as 2x sales, there’s never been a better time for investors to consider adding cannabis stocks to their portfolios.

In this article, we’ll take a look at 10 of the best marijuana stocks to buy now according to some of the smartest money managers in the world. These are stocks with high exposure to the cannabis industry, which rules out some pharmaceutical companies and brewers for whom cannabis represents just a tiny fraction of their businesses.

Photo by Richard T on Unsplash

The following cannabis stocks are ranked based on hedge fund sentiment. We follow a select group of hedge funds because Insider Monkey’s research has uncovered that their consensus stock picks can deliver outstanding returns.

All hedge fund data is based on the exclusive group of 900+ funds tracked by Insider Monkey that filed 13Fs for the Q3 2022 reporting period.

Tilray, Inc. (NASDAQ:TLRY), Canopy Growth Corporation (NYSE:CGC), and The Scotts Miracle-Gro Company (NYSE:SMG) are a few of the more well-known cannabis stocks to buy now. A lesser known player in the space is Canadian grower SNDL Inc. (NASDAQ:SNDL), or Sundial Growers, which has been busy of late buying up other Canadian cannabis assets.

SNDL Inc. (NASDAQ:SNDL) closed its acquisition of Zenabis Group’s cannabis business in November, acquiring IP rights to the company’s brands and strains as well as a 380,000 square foot indoor growing facility in New Brunswick. SNDL is also scheduled to close its acquisition of Valens in the first quarter of 2023. SNDL’s revenue hit CAD231 million ($168 million) in Q3, a 1,501% year-over-year increase.

Just a single hedge fund was long SNDL Inc. (NASDAQ:SNDL) on September 30 among the select group of top funds that are tracked by Insider Monkey’s database, down from ten funds in the middle of 2021. That lone fund was Israel Englander’s Millennium Management, which has held a stake in the company since Q3 2020 and which owned 113,828 shares at the end of Q3 2022.

Several hedge funds bought into Village Farms International, Inc. (NASDAQ:VFF) during Q2 as VFF shares continued to slide, now being down 71% this year. Millennium Management is also a VFF shareholder, though it cut its stake in the company by 48% during Q3. Jim Simons’ Renaissance Technologies held the largest Village Farms’ stake, comprised of 249,661 shares.

Canadian cannabis and produce grower Village Farms International, Inc. (NASDAQ:VFF) had a strong 2021, growing sales by more than 50% and more than quadrupling its gross profit. Its sales growth has slowed quite a bit this year however and its gross profit has declined as cost pressures from rising inflation have nearly tripled its operating expenses since 2020.

Village Farms International, Inc. (NASDAQ:VFF)’s sales declined by 2% year-over-year in Q3, primarily due to weakness in the company’s produce segment. Its cannabis sales were up by 14% to $35 million. Adjusted EBITDA swung to a loss of $2.23 million during the quarter, compared to a gain of $6.93 million a year earlier. The company believes it will be more profitable going forward now that spending on its brand launches subsides.

Several of the usual suspects, primarily quant funds, are also shareholders of OrganiGram Holdings Inc. (NASDAQ:OGI), including Renaissance Technologies, Millennium Management, and Two Sigma Advisors. Most of those funds were cutting the size of their OGI positions during Q3.

OrganiGram Holdings Inc. (NASDAQ:OGI) is another Canadian cannabis grower, in this case one that is focused on the medical cannabis space. The company briefly operated several alternative healing centers that used cannabis to treat conditions like PTSD and chronic pain, but sold them to Harvest Medicine in 2018.

OrganiGram Holdings Inc. (NASDAQ:OGI)’s shares have been crumbling in lockstep with the broader industry, which is making them look exceptionally attractive given the company’s strong results and growing market share in Canada.

The company grew revenue by 83% to $45.5 million during Q3, posted positive adjusted EBITDA for the third straight quarter, and grew its adjusted gross margin by 1100 basis points year-over-year to 23% thanks to greater volumes and improved efficiency. It grew its market share from 7% to 8.2% year-over-year, making it the third-largest licensed producer in Canada.

Hedge fund ownership of 22nd Century Group, Inc. (NASDAQ:XXII) ticked up during Q3, as several funds added the stock to their 13F portfolios. Among them were Kenneth Tropin’s Graham Capital Management and Paul Marshall and Ian Wace’s Marshall Wace LLP.

22nd Century Group, Inc. (NASDAQ:XXII) shares surged by over 500% between the end of October 2020 and the end of April 2021, but have slumped by 67% this year, widely trailing even the broader struggling cannabis industry.

Given its ability to create powerful, customized cannabis strains that suit individual growers’ needs, as well as its exposure to tobacco, hemp, and hops, 22nd Century Group is an intriguing and unique stock in the cannabis space.

The biotechnology company has achieved much of its success thanks to its low-nicotine cigarettes, which it plans to launch in as many as 13 additional states over the next year (they’re currently available in just five). But its hemp/cannabis sales are now getting off the ground too and look promising.

Unlike most cannabis stocks, hedge fund ownership of Aurora Cannabis Inc. (NASDAQ:ACB) has remained remarkably stable in recent years, with numerous funds seemingly unwilling to bail on the stock, which has lost 98% of its value over the last five years. Several of those funds hold Aurora’s senior convertible notes, which were issued in the first quarter of 2019.

Aurora Cannabis Inc. (NASDAQ:ACB) recently repurchased about 40% of those remaining notes for just under $100 million, which should result in the hedge fund ownership of the stock being shaken up during Q4. It’s bought back 68% of its outstanding notes over the past year, achieving close to $13 million in interest savings annually.

Cutting costs has been a primary objective for Aurora Cannabis Inc. (NASDAQ:ACB), which is aiming to achieve adjusted EBITDA profitability by the end of 2022. The Canadian grower has cut nearly CAD170 million ($124 million) in annual costs from its budget, with much of that coming at the expense of R&D. Despite those cost savings, Aurora still lost more money in Q3, CAD51.9 million ($37.8 million), than it generated in sales (CAD49.3 million/$35.9 million), which fell by 18% year-over-year.

The Scotts Miracle-Gro Company (NYSE:SMG), Tilray, Inc. (NASDAQ:TLRY), and Canopy Growth Corporation (NYSE:CGC) headline the second half of this article, which can be read by clicking the link below.

Click to continue reading and see the 5 Best Cannabis Stocks To Buy Now.