Expanded Medicaid, a key healthcare program for the poor, still isn't available in a dozen states more than a decade after the federal government started kicking in more generous funding to states to expand access. Read More... 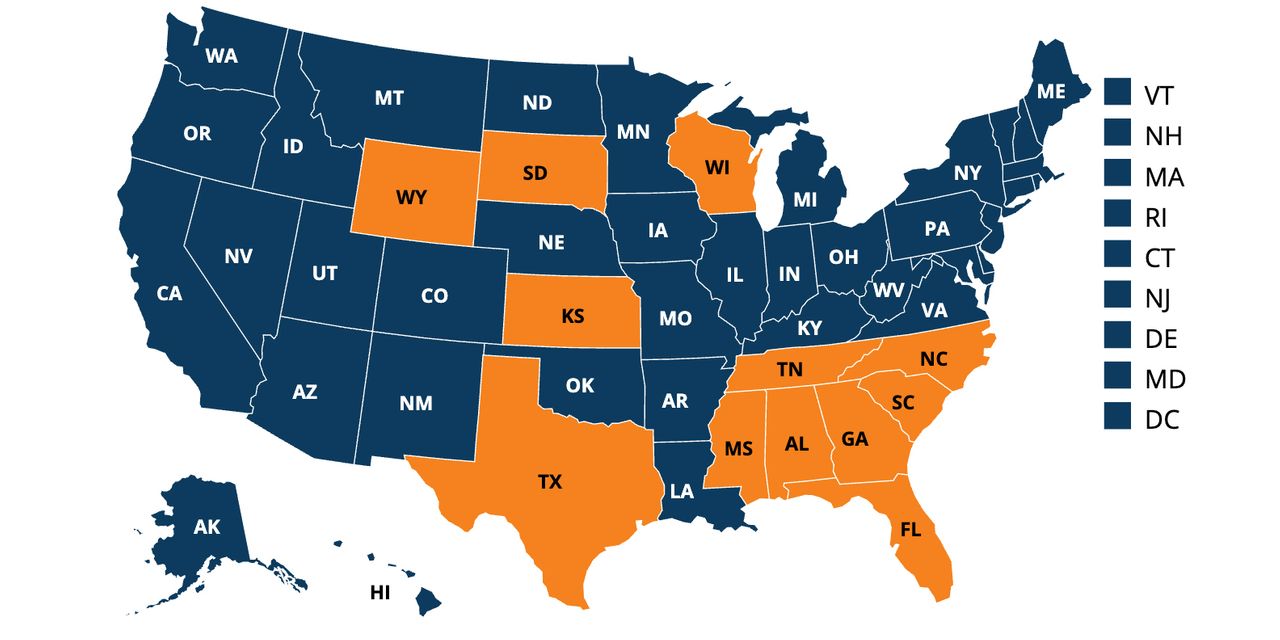 In 2020, Missouri residents voted to expand Medicaid, the federal health insurance program for the poor. Under the terms of the 2010 Affordable Care Act, the federal government contributes more generous funding to states that offer expanded access to the program to their residents. In Missouri, expansion would have meant an estimated 275,000 more people would have become eligible.

But in the spring, Missouri’s legislature refused to include funds for the expansion in the state budget, and in May, Gov. Mike Parsons declined to implement the unfunded program.

Finally, in August, a year after the referendum passed, Missouri’s state supreme court ruled that lawmakers had to proceed with the expansion.

Expansion isn’t costless: the Missouri legislature estimated it would have cost $156 million in the current fiscal year. But those expenses are “dwarfed,” in the words of Tax Policy Center senior policy associate Richard Auxier, by the amount of federal funds that flow to the state once expansion is under way, not to mention the broader benefits of increased health insurance.

With Missouri now legally decided, 12 other states, mostly Republican-led, are still expansion holdouts — and seem unlikely to budge, despite the roughly 11 years that have passed since the ACA was passed and 18 months into a global health pandemic. That’s a problem, not just for their residents but for the country as a whole, say professionals in public health and public finance.

“It’s so blatantly undemocratic — in many ways anti-democratic,” said Jamila Michener, of the Missouri showdown. Michener is an associate professor and co-director of the Cornell Center for Health Equity.

“We know Medicaid is a good investment, so why is it being blocked? It’s crass partisanship,” she told MarketWatch. “Expansion is associated with Obamacare. It doesn’t matter what that means for vulnerable populations, or for geographic, racial and class-based equity.”

Gov. Parsons’ office in mid-August said the state’s social services department would begin allowing individuals to apply for expanded Medicaid coverage, but that funding for the expansion remains an issue.

A raft of studies proves out that Medicaid, and its expansion, is indeed a good investment — not just for health outcomes — but for state economies and budgets as well.

“The money covers more people so it flows to hospitals and providers, which would have been providing uncompensated care,” said Lynn Blewett, director of the State Health Access Data Assistance Center, a program of the Robert Wood Johnson Foundation. “That translates to hiring more workers, and all those people pay taxes. One study showed that every $100,000 of federal Medicaid spending translates to two additional workers in the economy.”

Under the ACA, the federal government matches 90% of the cost of expansion. But the American Rescue Plan, the massive stimulus legislation passed earlier this year, sweetens the pot even more for holdouts. A recent report from the Commonwealth Fund analyzed the potential impacts of expansion with the enhanced incentives. It included a cost analysis for 14 states, including Missouri and Oklahoma, which have passed ballot initiatives, but still are in the process of expanding coverage.

States that already expanded continue to enjoy budgetary savings in out-years, according to a 2016 analysis from the left-leaning Center on Budget and Policy Priorities. Deep-red Louisiana, for example, expanded in 2016, projecting it would save $677 million over the following five years.

Jesse Cross-Call, CBPP’s director of state Medicaid strategy, and the author of that analysis, told MarketWatch that in addition to broader budget savings, state spending on Medicaid consistently grows more slowly in expansion states, and more quickly in non-expansion states.

As Auxier put it, “No state has accepted expansion and then thrown it away. It’s easier to politicize the issue before it happens, to say ‘this is Obamacare.’ It’s very different once you start providing your residents healthcare. Then the program becomes very popular.”

But as it becomes clearer that holdout states won’t expand no matter what the incentives, Washington policy makers are exploring ways to reach the estimated 2.2 million uninsured through a federal program, likely something similar to the marketplace exchanges on which Americans buy insurance coverage.

That sets up some moral dilemmas, and even those in favor of progressive policy to expand coverage are uncertain about what may come next.

“I’m a fan of closing the gap,” Michener said, “but in many ways, you’re now providing an alternative, rewarding the states for not expanding. It’s worth thinking about the incentives that it sets up for other states.”

“I think that for a lot of people working in this space, there’s no real easy pathway forward,” Blewett said in an interview. “How do you design a program that doesn’t create perverse incentives for states that have already expanded to retract expansion?” She likens the American health system to a game of whack-a-mole, designing patches to fix one problem, only to have another one pop up.

“In the middle of a pandemic, this has highlighted the precarious nature of not having coverage in a system that’s so expensive,” Blewett added.

Still, said CBPP’s Cross-Call, “I think that it is the right move just to get people covered. Rather than thinking about the states, it’s about centering it on people who don’t have coverage.” Some of the biggest states in the country, such as Texas and Florida, fall into this category, he pointed out, and 60% of those left with no coverage are people of color.

“The dynamics of people who have been left out are real.”

The uncomfortable dance around incentives to get states to do the right thing for their residents is a reminder that “we’re in a period of unprecedented partisan polarization,” Michener said. “It’s negative polarization. More than anything you want the other side to lose and you will literally bite off your nose to spite your face. This is a dangerous place to be.”

Read next: ‘Trying to strangle local governments’: What happens when states and their cities become adversaries?

‘Business is back to pre-COVID levels:’ Analyst on Roku earnings

3 Supercharged Tech Stocks That Are Going to the Moon