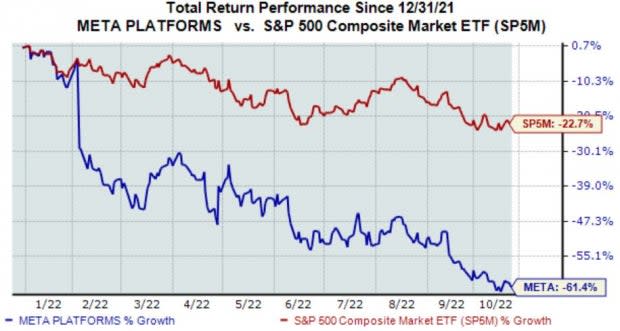 A slowdown in digital advertising revenue has been a thorn in the company's side, as has been the issue with several other social-media-related stocks, such as Snap (SNAP). Read More...

Once an investor favorite in many portfolios, the tide has shifted for Meta Platforms META shares in 2022, down more than 60% and coming nowhere near the S&P 500’s performance.

Over time, Meta Platforms has branched out its social media offering beyond just its Facebook app, acquiring others like Instagram in 2012 and WhatsApp in 2014. As of late, the company has focused significantly on the Metaverse.

A slowdown in digital advertising revenue has been a thorn in the company’s side, as has been the issue with several other social-media-related stocks, such as Snap SNAP.

Now, the company is gearing up to report quarterly earnings on October 26th, after the market close.

Currently, Meta Platforms carries a Zacks Rank #3 (Hold) paired with an overall VGM Score of a B.

Quarterly revenue was reported at $1.1 billion, which missed the Zacks Consensus Sales Estimate by roughly 1.5% but reflected a 6% Y/Y uptick.

The company did see favorable trends across its customer base – Daily Active Users (DAUs) came in at 363 million, reflecting a solid 19% increase Y/Y.

Still, the digital advertising market has continued to slow.

In a letter to its shareholders, SNAP says, “We are finding that our advertising partners across many industries are decreasing their marketing budgets, especially in the face of operating environment headwinds, inflation-driven cost pressures, and rising costs of capital.”

Further, SNAP doesn’t intend to provide guidance for Q4, citing that revenue in Q4 is typically disproportionately generated in the back half.

The market didn’t take the news lightly, with shares opening down more than 25%.

Analysts have primarily been bearish in their earnings outlook, with two negative earnings estimate revisions hitting the tape. The Zacks Consensus EPS Estimate of $1.82 suggests a 44% Y/Y decline in earnings.

META’s top-line is forecasted to contract modestly, with the Zacks Consensus Sales Estimate of $27.4 billion indicating a Y/Y decline of roughly 5%. Below is a chart illustrating the company’s revenue on a quarterly basis.

It’s worth noting that Meta Platforms had already provided disheartening revenue guidance for Q3 in its Q2 report.

For the quarter, the Zacks Consensus Estimate for advertising revenue sits at $27 billion, reflecting roughly a 4.6% sequential decline and a 7.2% Y/Y decline. Clearly, the slowdown in digital advertising has also been affecting META notably.

Daily active users are forecasted to come in at roughly 1.9 billion, reflecting a marginal 1.1% sequential uptick.

Similar to SNAP, estimates allude to an increase in daily active users but a downturn in advertising revenue.

META shares have seen their valuation multiples contract extensively amid the stretch of poor price action; the company’s 13.8X forward earnings multiple is well beneath its steep 23.8X five-year median, representing a 33% discount to its Zacks Computer and Technology sector.

Further, the company’s P/B ratio has come down to 2.8X, a fraction of its 6.2X five-year median.

It will be a pivotal quarter for the company, with shares already deep in the red YTD.

A cooling digital advertising market has been a thorn in the company’s side, similar to what we saw in Snap’s SNAP Q3 print.

Quarterly estimates suggest decreases in both earnings and revenue, and analysts have been in full agreement.

Heading into the print, Meta Platforms META carries an Earnings ESP Score of -3.2%.