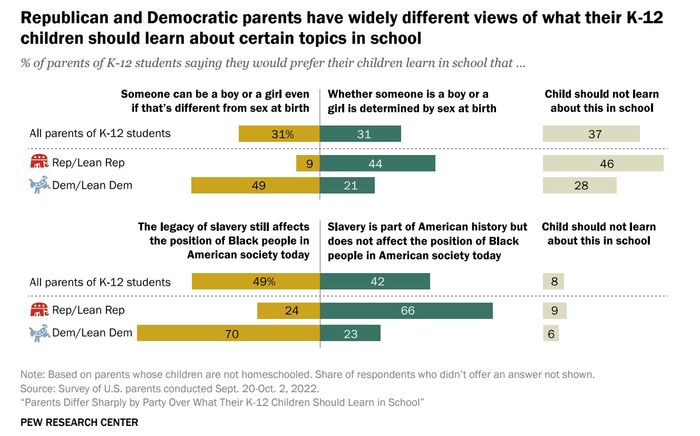 Issues including gender identity, school prayer and the legacy of slavery are on the minds of voters with children ahead of the Nov. 8 midterm elections. Read More...

As they head into the voting booth for the Nov. 8 midterm elections, parents are sharply divided along political lines over what their children should be taught in the classroom.

Parents are “deeply polarized” about whether their children should learn about issues like gender identity and the legacy of slavery in the United States, according to a report by the Pew Research Center, a Washington, D.C.-based think tank.

As issues surrounding K-12 education make headlines ahead of the midterms, candidates on different sides of the political spectrum are focusing on different priorities. Conservative candidates often promote the rights of parents to have a greater say in school curriculums, especially on issues such as race, gender and slavery. Liberal candidates are more vocal about increasing teachers’ pay and supporting LGBTQ students.

On the topic of gender identity, some 31% of parents of children in kindergarten through 12th grade told Pew that they would prefer that their children learn in school that a child’s gender is determined by the sex they were assigned at birth, according to the report released Wednesday. The same percentage of K-12 parents said they would rather their kids learn that gender can be different from the one assigned at birth. Another 37% say their children should not learn about this topic at school.

“As issues surrounding K-12 education make headlines ahead of the midterm elections, candidates on different sides of the political spectrum are focusing on different priorities. ”

How to teach about the legacy of slavery in the U.S. has also divided parents, with less than half of parents of K-12 students (49%) saying they would like their children to learn that the legacy of slavery still affects the position of Black people in America, and 42% saying that while they would like their children to learn about slavery, its legacy does not affect Black people today.

As with other issues, opinions were divided along political lines. Only 24% of Republican and Republican-leaning K-12 parents believed their children should learn that the legacy of slavery still affects the position of Black people in America, versus 70% of Democratic parents; 66% of Republicans and 23% of Democrats said their kids should learn that slavery is part of American history but that it does not affect Black people in the U.S. today.

Republican and Republican-leaning parents with children in K-12 schools are roughly twice as likely as Democratic and Democratic-leaning parents to say they don’t have enough influence over their children’s education (44% vs. 23%, respectively). Republicans are also more likely than Democrats to believe school boards have too much influence over their kids’ education (30% vs. 17%).

This Pew study is based on a survey of 3,251 U.S. parents with children in elementary, middle or high school and was part of a larger survey of parents with children younger than 18 conducted between Sept. 20 and Oct. 2, 2022. A majority of the parents who took part are members of the Center’s American Trends Panel, an online survey panel.