Alphabet (GOOGL) has set aside $100 million in a fund intended to draw more creative minds to YouTube Shorts, a new service that hosts short-form videos. YouTube Shorts is still in the early stages of rollout and has launched in the U.S. and India. There is currently no way for Shorts creators to monetize their content on the platform. The Shorts fund is the first step in bringing monetization opportunities to the service. The fund will pay those who share the most popular content, as measured by engagement and views. It will begin distribution in the coming months and run through 2022. Alphabet targets to reward thousands of Shorts creators every month during the fund’s lifespan. “We’re excited to start rewarding creators for their contributions through the Shorts Fund,” said Amy Singer, Director of Global Partnership Enablement for YouTube Shorts. Alphabet will also use the fund as a learning opportunity. For example, it will ask popular creators to share their feedback to home in on best practices. Also, since the fund is temporary, Alphabet is seeking a long-term Shorts monetization model. Among its plans is testing Shorts ads to see how they perform. Alphabet primarily makes money from ad sales. (See Alphabet stock analysis on TipRanks) China Renaissance analyst Ella Ji upgraded Alphabet's stock rating to Buy from Hold and raised the price target to $3,000 from $1,477. Ji’s new price target implies 34.18% upside potential to the current price. The analyst grew more optimistic about Alphabet after its strong Q1 earnings. "On solid 1Q21 results, we turn more bullish on the growth momentum and long-term growth outlook for Alphabet’s advertising business,” commented Ji. The consensus among analysts on Wall Street is a Strong Buy based on 28 Buy and 2 Hold ratings. The average analyst price target of $2,769.59 indicates 23.87% upside to current levels. GOOGL scores a 7 out of 10 on TipRanks’ Smart Score rating system, implying the stock’s return will likely align with market performance. Related News: Alphabet’s Google Pay Adds Cross-Border Payments Facebook Facing Fine Over Unconsented Israeli Acquisitions? Amazon Expanding In Louisiana With Robotics Fulfillment Center More recent articles from Smarter Analyst: eBay Hops on the NFT Bandwagon Lucira’s COVID-19 Self-Test Now Available On Amazon; Shares Rise 38% Utz Brands Snaps Up Festida Foods For $41M TMX Group Posts Better-Than-Expected 1Q Results, Boosts Dividend 10% Read More... 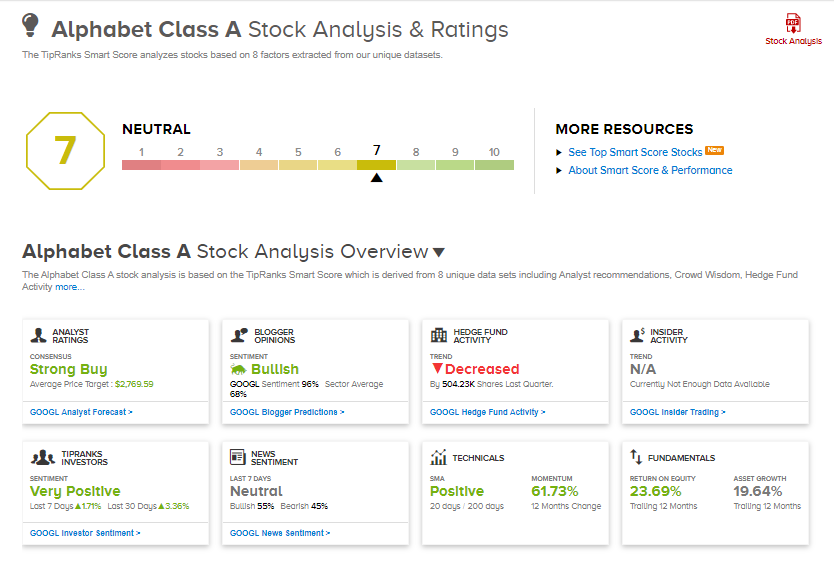 Value Investing Is a Winner From Tech Wreck on Wall Street

(Bloomberg) — A fast and furious rotation into value shares is sweeping Wall Street while long-time market favorites — technology shares — are extending their decline.Across the world, shares tied to economic growth are outperforming as the commodity rally helps push bond-market inflation bets toward a 15-year high.A strategy that bets on U.S. equities that look undervalued and against expensive ones is rising again on Tuesday after posting its biggest rally in two months on Monday. The Nasdaq 100 fell as much as 2% at the open, compared with a 1.1% drop for the Dow Jones Industrial Average.“Renewed value leadership at the factor level and the broader risk-on rebound suggest the economic cycle is continuing rather than peaking,” Evercore ISI strategists led by Dennis Debusschere wrote in a note.The Russell 1000 Value Index has jumped more than 1.3% this month while the Nasdaq has lost money. It’s all shaking up the world of exchange-traded funds, where assets in value ETFs have firmly overtaken those of funds tracking the growth investing style, according to smart-beta data compiled by Bloomberg Intelligence.All this means quant investors who stuck with value during its historic pounding in the pandemic are getting their mojo back, while traders crowding into speculative tech-heavy corners of the market including Cathie Wood’s ARK funds are on the back foot.It’s a comeback long in the making. Value shares — or those with low prices relative to some fundamental indicator like earnings — are typically more dependent on the business cycle than tech stars like Tesla Inc. They have been persistent laggards in recent years, especially when last year’s lockdowns drove investors further into stay-at-home names like Zoom Video Communications Inc.But while most value revivals have proved fleeting in the post-crisis bull years, a slew of analysts now say the stars are aligned for this one to last.Higher inflation expectations have tended to favor value, since it typically comes with faster economic growth and higher bond yields, hurting tech stocks whose long-term prospects now have to be discounted at higher rates.Over the past month, the energy, materials and financial sectors have led the S&P 500. Tech has been the worst performer.Even former skeptics predict this rotation has further to go. Sanford C. Bernstein strategists, who once joked about value managers having no clients, said in a note on Friday “there is plenty of ammunition left.”“Value stocks remain the most uncrowded part of the market,” the team wrote in a note. “In the longer run, this rotation is but a blip in the persistent underperformance of value versus growth.”Because of value’s historic drawdown last year, its recent recovery has only narrowed its discount slightly, with the spread still at double the 10-year average and triple the 20-year. At Barclays Plc, strategists led by Emmanuel Cau noted value sectors like mining and financials might even be getting relatively cheaper, since their earnings — the denominator of those multiples — are rising faster than prices.At Versor Investments, which is among the quant funds that predicted a value comeback, founders Deepak Gurnani and Ludger Hentschel pointed out that after the dot-com bubble burst, the strategy posted strong performance between 2000 and 2004.“The positive value returns in 2021, so far, have done little to shrink the extreme value spreads created by the previous negative returns,” they wrote in a report.Meanwhile, the market shift means that investors in momentum — an allocation style that buys recent top performers — have been putting more money into value, after bidding up tech names in recent years. The semi-annual rebalancing of the $14 billion iShares MSCI USA Momentum Factor ETF (ticker MTUM), for instance, is expected to see a big rotation into cyclical and riskier names this month.At least one large cohort of money managers has yet to join the rally. Bank of America Corp. noted last week that the value rotation has yet to exert much influence on the returns posted by active funds. That suggests these investors may be braced for pain if instead they chased the likes of Big Tech and renewable energy at the market top.“Portfolios are still majorly composed of long duration growth assets and hence would be prone to losses if macro/inflation dynamics continue to improve,” strategists at Barclays wrote. “Cheap, economically sensitive, and an inflation hedge, value seems like the natural place to position a portfolio.”(Updates prices for U.S. market open)For more articles like this, please visit us at bloomberg.comSubscribe now to stay ahead with the most trusted business news source.©2021 Bloomberg L.P.

Need to Know: This is the trap awaiting the stock market ahead of a grim summer, warns Nomura strategist

The Conversation: Here’s how long you’ll live — and how much of that will be healthy years