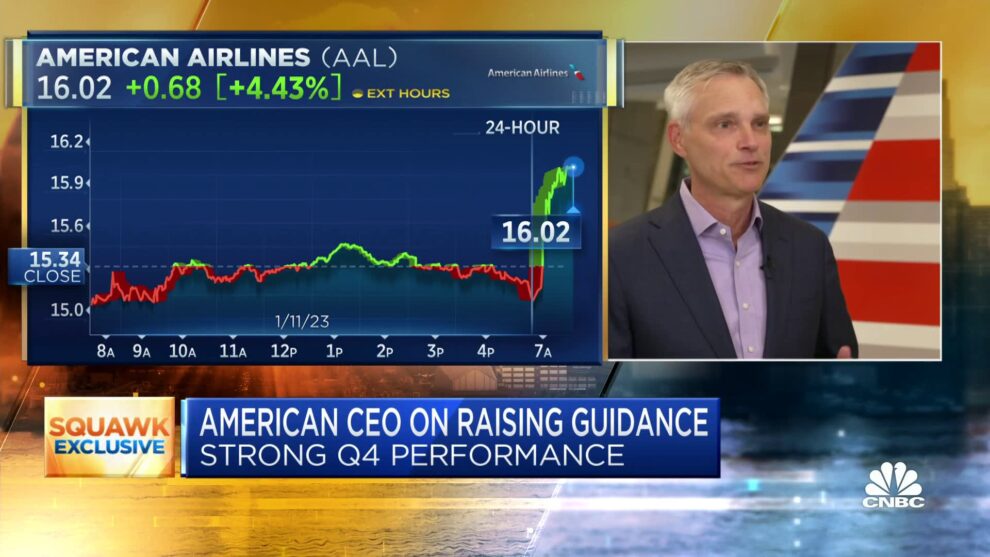 American Airlines shares rose more than 4% in morning trading Thursday after the carrier hiked its revenue and profit estimates for the fourth quarter thanks to strong demand and high fares.

American estimates revenue rose as much as 17% over the same period in 2019, up from a previous forecast of an 11% to 13% increase compared with the period three years earlier, before the Covid pandemic.

American said revenue per seat mile likely climbed 24% above the 2019 quarter, higher than its prior forecast of 18% to 20%.

It expects to report adjusted earnings per share of between $1.12 and $1.17, up from its previous estimate of between 50 cents and 70 cents.

The update Thursday is the first indication of how a major airline coped with a rocky end of the year, when severe weather sparked mass cancellations around the U.S. during the busy holiday travel season. American is scheduled to report full results on Jan. 26. Delta Air Lines is set to announce quarterly results Friday morning.

American’s new CFO Devon May, who started in that role Jan. 1, told CNBC that bookings are currently coming in as expected.

High costs, staffing issues and aircraft shortfalls have eaten into airline profits over the past year.

“The No. 1 thing is to get aircraft utilization back to historical levels,” May said, adding that the carrier is getting close to that in its mainline operation, though it is more difficult on regional partners, where pilot shortages are more acute.

Other carriers are also looking for ways to reduce expenses. For example, JetBlue Airways earlier this week told pilots to try to conserve fuel by taxiing with a single engine and hooking up to ground power quickly to reduce reliance on auxiliary power systems. It even suggested crews pack light.

Cutting aircraft weight by 30 pounds per flight could save $1 million a year, JetBlue told pilots on Tuesday.

“It may seem silly, but what we pack matters,” JetBlue said in a pilot memo, which was seen by CNBC. “While we all have essential items we need while traveling, it’s important to pack what you need and leave home what you don’t.”