Aphria shareholders voted in favor of the proposed merger with rival Tilray, which will create the world’s largest cannabis company by revenue. Aphria (APHA) and Tilray (TLRY) first announced their proposed deal in December of last year. The required two-thirds majority of Aphria shareholders backed a motion to approve the deal at the company's shareholders meeting on Wednesday. Aphria said that the reverse-acquisition of Tilray was approved by 99.38% of the shares represented at its shareholders' meeting. Tilray will hold a meeting of shareholders to vote on the reverse takeover by Aphria on April 30. If the deal goes ahead, the two companies will operate under the Tilray brand with Aphria’s current CEO, Irwin D. Simon, leading the new entity. Simon said, "I want to thank all Aphria Shareholders for voting and approving the Arrangement. We appreciate their support, as we believe the business combination will create a Combined Company with a strong financial profile, low-cost production, market share leading brands, distribution network and unique partnerships. The Combined Company will be increasingly well positioned to deliver a sustainable attractive return for our combined shareholder base." (See Aphria stock analysis on TipRanks) After Aphria released its 3Q 2021 fiscal results, Canaccord Genuity analyst Matt Bottomley downgraded the stock to Hold from Buy with an unchanged C$17.50 price target (1.07% downside potential). In a research note, Bottomley told investors that while he believes the company’s 3Q "signals a number of red flags" that could impact most cannabis operators, he is downgrading Aphria as the stock is trading at 97% of the implied transaction price with Tilray. Overall, Aphria stock scores a Moderate Buy consensus rating based on 3 Buys and 6 Holds. The average analyst price target of C$22.05 implies upside potential of about 24.6% to current levels. Related News: OrganiGram Holdings’ 2Q Revenue Misses Estimates; Shares Plunge 10% Aphria’s 3Q Sales and EPS Miss Estimates; Shares Plunge 14% Shaw Communications’ 2Q EPS and Revenue Beat Estimates More recent articles from Smarter Analyst: Vext Science Posts Strong Sales Growth In 4Q Nuvei To Acquire Mazooma For $56M Plus Add-Ons United Rentals Snaps Up General Finance In $1B Deal SeaSpine Holdings Prices 4.5M Public Offering At $19.50 Per Share Read More... 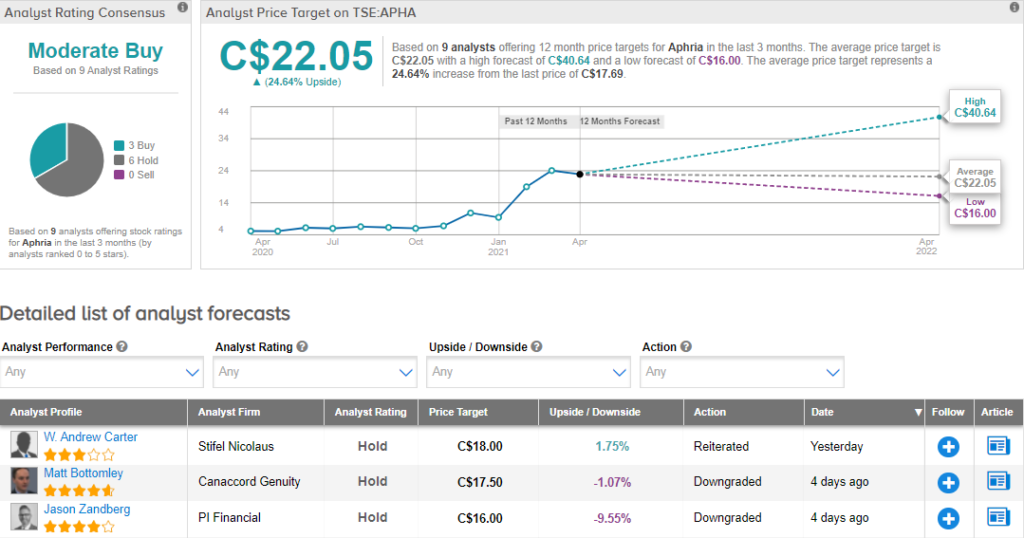 : Planning COVID ‘revenge travel’ this summer? 7 tips to save money on that long-overdue vacation

: ETF Wrap: How to think about – and play – the wave of M&A activity

The Moneyist: My son is the only one wearing a mask at his job, while all the executives are working from home — what can he do?

IPO Report: 5 things to know about luxury secondhand retailer The RealReal before its IPO