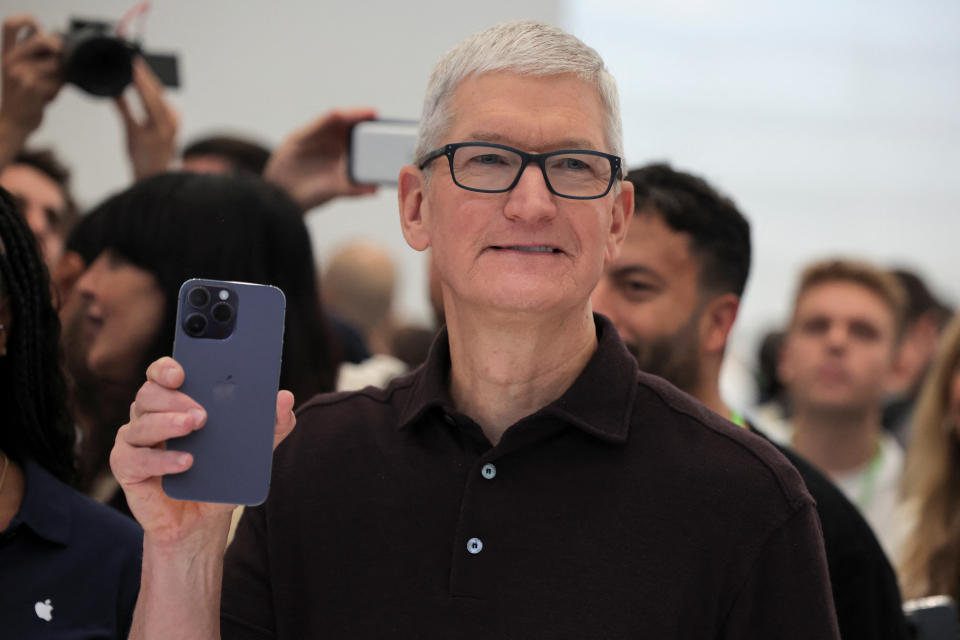 Apple will launch its first mixed-reality headset this year. But it's not going to replace the iPhone for the tech giant. Read More...

This article was first featured in Yahoo Finance Tech, a weekly newsletter highlighting our original content on the industry. Get it sent directly to your inbox every Wednesday by 4 p.m. ET. Subscribe

Apple (AAPL) is expected to unveil its first mix-reality headset. According to Bloomberg’s Mark Gurman, the Cupertino-based company will unveil the highly anticipated hardware, dubbed the Reality Pro, ahead of its Worldwide Developers Conference event in June, before launching it later this fall.

For years, Apple has been searching for a new product to offset its reliance on iPhone sales, which make up the bulk of its revenue. It’s introduced subscription services like Apple TV+, Apple Music, and Apple Fitness+ and debuted accessories like the AirPods and Apple Watch. But those are more or less add-ons for iPhone owners.

The Reality Pro headset, on the other hand, is a self-contained device that will launch the company into a completely new computing space — and put it into direct competition with the likes of Meta (META). The headset is expected to be one of the most advanced on the market and come complete with high-resolution displays, external cameras for augmented reality capabilities, and run on Apple’s own M2 processor.

But don’t expect the Reality Pro to save Apple from its iPhone dependence anytime soon.

“It’s a meaningless product,” UBS Analyst David Vogt told Yahoo Finance. “It’s a very high-end device. We’re talking like $1,500, $2,000, if not more. So that’s a very limited audience. And it’s mostly going to be, we think, industrial-centric to start. So, the volumes we think are going to be relatively low.”

In other words, Apple’s iPhone will still be its most important product regardless of what form of reality you’re in.

Apple’s iPhone is as important as ever

“Apple has very much become a one crop economy, so to speak, where its reliance on iPhone revenues has started to become perhaps troubling in terms of…its ability to sustain growth,” NYU Stern School of Business professor Arun Sundararajan told Yahoo Finance. “And so I can see the motivation from within the company to want to have another game changing product.”

But analysts say the Reality Pro’s steep price means it’s unlikely to ever sell in the kinds of volumes needed to to outpace the iPhone.

According to CCS Insight, worldwide VR and AR device shipments will top out at 66.8 million by 2026. That’s a huge jump from the 9.6 million shipped in 2022, but nowhere near the 1.24 billion smartphones IDC says were shipped in 2022.

According to Vogt, the only products that could help Apple become more than an iPhone company are its car, codenamed Project Titan, or a deeper foray into the health-care space.

If that’s the case, then why is Apple jumping into the mixed reality arena to begin with? Simple: it sees companies like Meta, Nvidia (NVDA), and Microsoft (MSFT) investing in the space, and can’t afford to fall behind on the off chance that mixed reality headsets or their accompanying software end up being the go-to devices of the future.

After all, Apple saw firsthand how much Microsoft suffered by entering the smartphone market too late. After spending $7.2 billion to acquire Nokia in 2014, the cloud computing giant sold portions of the phone maker for scraps.

The smartphone is still the center of our digital lives

Apple’s iPhone is a generational product that has influenced everything from its competitors — Google reworked its prototype Android phone after Apple founder Steve Jobs debuted the iPhone in 2007 — to our cars, which now sport interfaces that look more like our phones than ever.

“Every meaningful part of our lives is affected and influenced by smartphones on a daily basis,” NYU Stern School of Business professor Anindya Ghose told Yahoo Finance.

“Given this, I don’t see a viable path for a virtual reality device to make any significant dent with respect to mind share or adoption by consumers. The smartphone, and the iPhone in particular, is incredibly powerful in terms of share of mind for consumers.”

Of course, that could play to Apple’s advantage. The company’s customers tend to be incredibly loyal, giving it an install base of hundreds of millions of iPhone users ready to check out its newest device.

Still, it’s hard to imagine those consumers will be willing to wear headsets for long periods to view content that they can otherwise see by quickly picking up their phones. Headsets, regardless of who makes them, are still too bulky and off-putting to be a person’s primary means of computing. Even Meta’s high-end Quest Pro is too heavy and uncomfortable, according to The Verge.

That’s not to say an Apple-built mixed reality headset won’t be a success, or that it won’t help drive more consumer interest in virtual reality and mixed reality. But for the foreseeable future, the iPhone will continue to serve as both Apple’s breadwinner and most influential product. It’s virtually guaranteed.