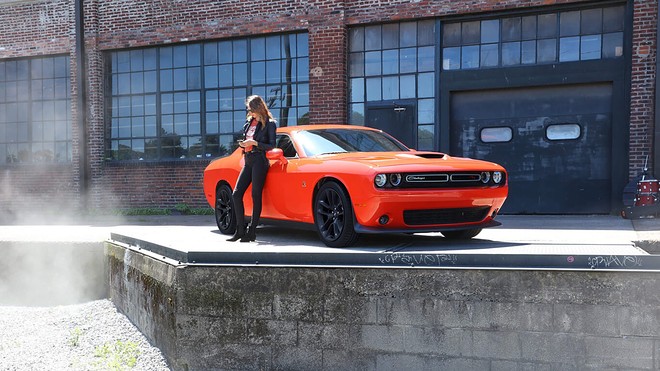 Dare to compare: The Challenger and Camaro are direct competitors in American muscle cars. Read More...

If you’re in the market for a 2-door American muscle car, then there’s a good chance the Chevy Camaro and the Dodge Challenger have both caught your eye. Both of these cars offer striking style and incredible power, especially when you get into the higher-performance trims.

Let’s take a closer look at the differences and similarities between the Challenger and the Camaro and see which one is right for you.

Both of these cars have their own distinct personalities that are shown off with their unique exterior designs. The Challenger has a more retro look, with an aesthetic that is a clear throwback to the Challenger of the early 1970s, but with a modern twist. The Camaro has a shape that’s reminiscent of its early predecessors, but it has an overall more modern look than its Dodge rival.

Also see: Why I own a Dodge Durango muscle-SUV

The Challenger is a bigger car than the Camaro, being 10 inches longer, one inch wider, and up to 5 inches taller than the Chevy. The Camaro is a smaller, lighter car, which contributes to its excellent agility, but the larger size of the Challenger gives it some benefits that we’ll get into shortly.

Another big difference between these two cars is the fact that the Camaro is available as either a coupe or a convertible, while the Challenger has no convertible option.

Neither of these cars is particularly luxurious on the inside, but they both have stylish, functional interiors and roomy, comfortable front seats. The Camaro has a flat-bottom steering wheel and unique ventilation controls, while the Challenger has a good interior, but nothing spectacular to make it stand out.

The 6.2-liter V8 in the Camaro SS is a better engine than the 5.7-liter Hemi V8 in the Challenger R/T. The Challenger offers a bigger 6.4-liter V8, which is a fantastic engine, but if you really want to get serious about performance and money is no object, then upgrading to the supercharged Hellcat or Hellcat Redeye is a must. The supercharged V8 in the Camaro ZL1 is outstanding and incredibly powerful, but it still doesn’t match what Dodge offers on the top end.

Also on MarketWatch: What it’s like to drive a Tesla Model Y

Neither of these muscle cars offers a lot of standard safety technology outside of a backup camera. Optional driver assistance tech in both cars includes rear parking sensors, blind-spot monitoring, rear cross-traffic alert and forward-collision warning. The Challenger is available with adaptive cruise control, and the Camaro is available with a head-up display and a rearview camera mirror.

Which muscle car is right for you depends on your priorities. If you value sharp handling on the track over muscular, straight-line performance, then you’ll prefer the Camaro over the Challenger. However, if the drag racer in you craves big power in a big car and you want the added practicality of usable back seats, a bigger trunk and available AWD, then the Challenger is the better choice.

Snap, IBD Stock Of The Day, Near Buy Point On Positive Comments

Microsoft rolls out new cloud services for AI and blockchain

Cannabis Watch: More baby boomers use medical marijuana, but they want their doctors to get wise to the risks and benefits