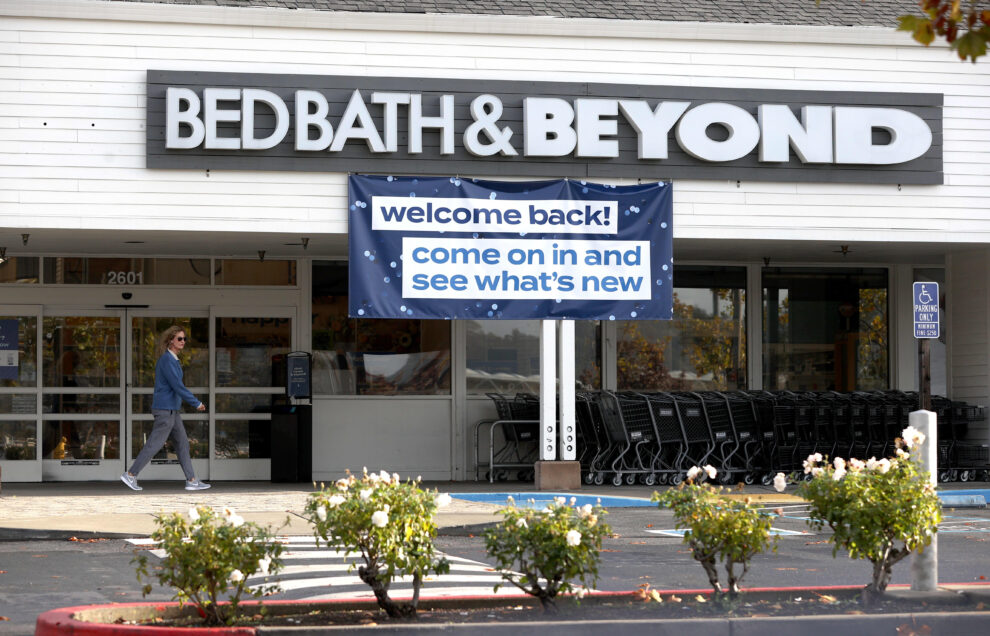 Bed Bath & Beyond is in the middle of a turnaround effort and has been under pressure from an activist investor. Read more...

Bed Bath and Beyond on Wednesday reported a surprising holiday-quarter loss, as the company ran low on inventory and struggled to move merchandise out of congested ports and onto shelves.

Shares fell more than 10% in premarket trading, as investors weighed the news.

CEO Mark Tritton said out-of-stock merchandise caused the company to miss out on about $175 million in fiscal fourth-quarter sales. That’s higher than the prior quarter, when supply chain bottlenecks cost the company about $100 million.

Tritton said in a CNBC interview that the home goods retailer is disappointed by its results. He said “major headwinds in the macro environment” have slowed the company’s turnaround efforts. For instance, he said, moving goods costs more, and some best-selling items from national brands are in short supply due to missing components like microchips that go into vacuums. Plus, he said, the majority of its seasonal merchandise got stuck at ports and arrived late.

He said some of those challenges have carried into the current quarter.

Still, Tritton said, Bed Bath is making progress with its transformation. He said it is investing in technology, welcoming back customers with postcards and targeted emails and expanding its more profitable private label business.

Bed Bath has been on a bumpy ride, as Target veteran Tritton has sought to refresh the retailer’s brand with the launch of private label products, store remodels and closures of underperforming locations. Its stock has been drawn into meme-stock rallies along with AMC Entertainment and GameStop. It has also been under pressure from investors — including activist Ryan Cohen, chairman of GameStop and founder of Chewy.

The retailer recently struck a deal with Cohen’s firm, RC Ventures, by agreeing to add new board members and explore whether it should spin off or sell its BuyBuy Baby business, which has been one of its bright spots.

Bed Bath on Wednesday did not provide a specific forecast, but said it expects sales and margins to improve in the second half of the upcoming fiscal year, as supply chain conditions ease.

Here’s how the retailer did in the three-month period ended Feb. 26 compared with what analysts were anticipating, based on Refinitiv data:

The company’s net loss grew to $159 million, or $1.79 per share, from net income of $9 million, or 8 cents a share, a year earlier. Excluding one-time items, it lost 92 cents a share. Analysts surveyed by Refinitiv had expected earnings per share of 3 cents.

Same-store sales, a key retail metric, dropped 12% across Bed Bath’s business compared with the year-ago period. Same-store sales declined 15% for the Bed Bath & Beyond banner and grew by low single-digits for the BuyBuy Baby banner.

Digital sales declined by 18% compared with the year-ago period, which partially reflects the shift back to stores and normalizing e-commerce levels.

Tritton said Bed Bath is doing a complete overhaul of its supply chain so it can better manage all of its merchandise as it imports goods and moves them to distribution centers and stores. He said that technology, which acts like “a virtual control tower,” will go live at the end of this month. Those efforts were already underway, but have become more urgent, he said.

Along with executing on its turnaround efforts, Bed Bath must compete for shoppers’ dollars as inflation is at an approximately four-decade high. Consumers are also weighing other spending priorities, such as summer vacations and spring wardrobes, which may direct their attention outside of the home.

Tritton said the backdrop is tougher for the retailer, especially since households no longer have extra dollars from the government like child tax credits. That is “dampening the overall demand for several categories, including home,” he said.

“We think there’s an evergreen, strong home market that has had some erratic ups and downs and when it normalizes, we think there’s a great business to be had,” he said. “We’re part of customers’ lives and their wants and needs and to ensure that we’re in stock and servicing that need is our key agenda.”