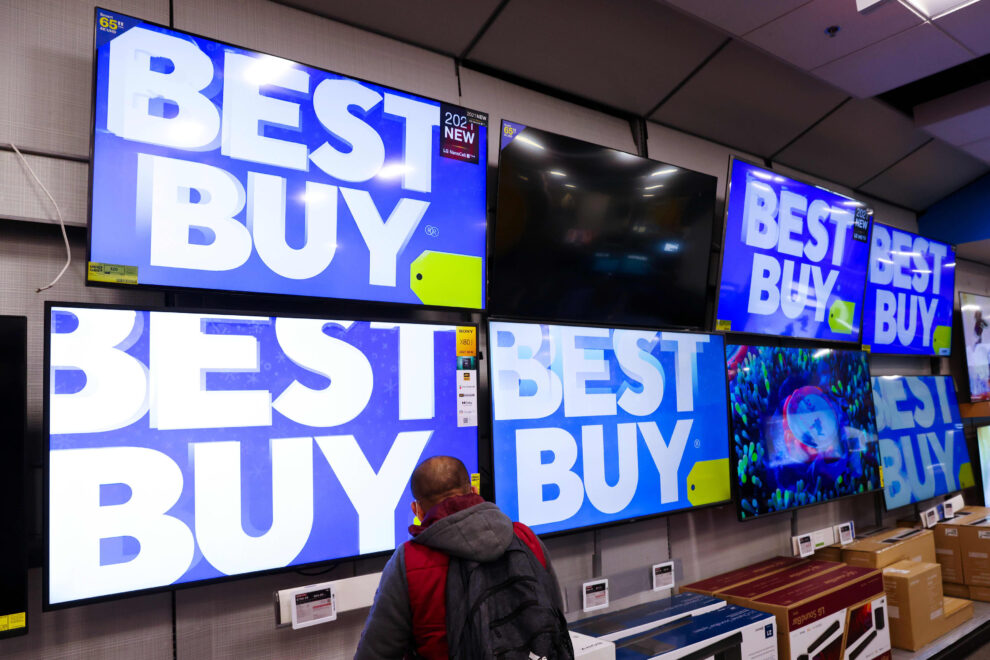 Televisions are seen for sale at a Best Buy store in New York City.

Best Buy on Tuesday said sales dropped by about 13% in the second fiscal quarter, as the retailer felt a pullback from inflation-weary shoppers.

The company reaffirmed its full-year guidance. The company had cut its forecast in late July, saying it expects weaker demand for consumer electronics as people pay more for groceries and gas. It expects same-store sales to drop by about 11% for the 12-month period ended in January.

“We are clearly operating in an uneven sales environment,” she said in a news release. The company is “focused on balancing our near-term response to difficult conditions and managing well what is in our control” as it works toward long-term growth, Barry added.

Here’s how the retailer did in the three-month period ended July 30 compared with what Wall Street was anticipating, according to a survey of analysts by Refinitiv:

Now, however, some of those patterns have faded as people go back to the office or go on summer vacations. Some consumers are skipping over big-ticket and discretionary items as they pay more for necessities.

Sales online and at stores open at least 14 months, a key metric known as same-store sales, declined by 12.1% versus the year-ago period. That’s slightly better than Best Buy’s guidance, which anticipated an approximately 13% drop for the current three-month period.

Best Buy anticipates a sharper decline of same-store sales in the third quarter, Chief Financial Officer Matt Bilunas said in the company’s release Tuesday. He did not give specific guidance, but said it will be more than the 12.1% decline reported for the second quarter.

Barry said the retailer has noticed some shoppers are trying to stretch the budget. Some, especially those from lower-income households, are trading down to lower-priced TVs or timing purchases for sales events, she told investors on an earning calls.

Still, she said, customers are willing to pay more for some brand-name items, such as smartphones and gaming hardware.

Retailers across the industry are coping with an abundance of unwanted merchandise. Walmart and Target, for instance, cut their profit forecast for the full year because they are marking down items to try to move them off shelves.

Barry said Best Buy has closely managed its merchandise to make sure it doesn’t get stuck with excess goods. At the end of the second quarter, she said, inventory was down 6% compared with the year-ago period. It was up about 16% from the same time in 2019.

Even with lower inventory levels, though, Barry said the company’s profits are under pressure as competitors discount an abundance of goods with more promotions.

As sales soften, Best Buy has paused share buybacks. It is also in the middle of a restructuring initiative, which has included layoffs of store employees.

Best Buy said it has spent $34 million on the restructuring effort, with most spent on termination benefits, and it expects more in the coming months. It did not say if that will include more layoffs.