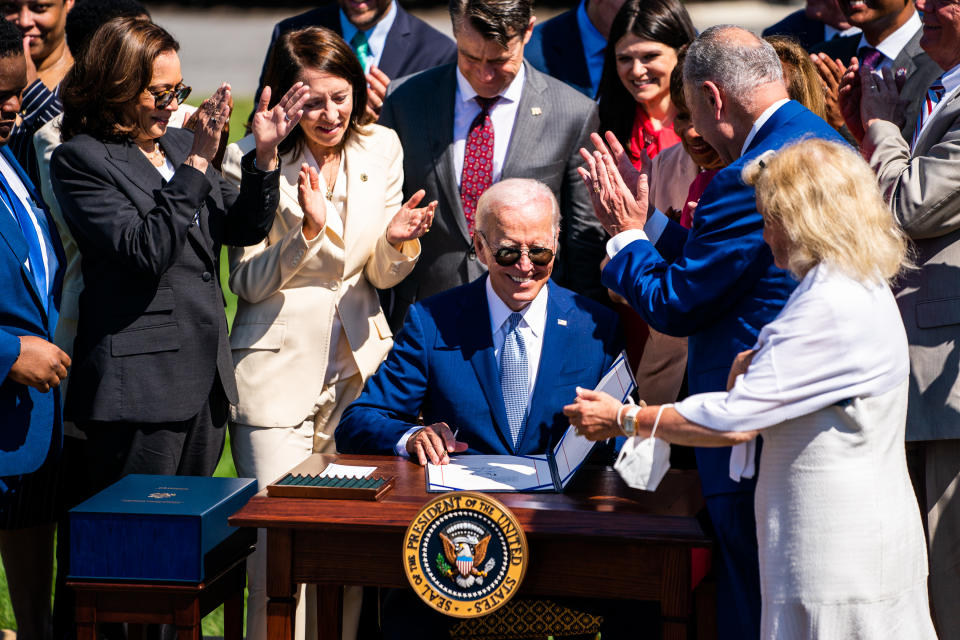 President Biden is set to visit Ohio for the groundbreaking of Intel’s long-awaited semiconductor manufacturing facility. It’s a victory lap of sorts for the President after he signed the Chips and Science Act of 2022 in August. Read More...

President Joe Biden is set to visit Ohio for the groundbreaking of Intel’s (INTC) long-awaited semiconductor manufacturing facility. It’s a victory lap of sorts after Biden signed the Chips and Science Act of 2022 into law in August, giving $50 billion to the chip industry.

Friday’s event will kick off construction of a $20 billion facility. While Intel announced the facility before the Chips bill passed, it could be the first step towards a $100 billion “full buildout” in Ohio over the coming decade partly made possible by the new law, Intel CEO Pat Gelsinger has said.

The Biden administration championed the passage of the CHIPS Act to encourage U.S. chip production after the pandemic spurred a nationwide chip shortage and exacerbated a supply chain crisis. Chips are used in everything from automobiles to mobile phones to home electronics.

The Ohio facility is “the biggest investment of its kind ever in our nation,” Biden said during a Cabinet meeting on Tuesday ahead of the trip. “We’re finally bringing home jobs that have been overseas for a while.”

Biden aides say chip makers are already planning for how they will spend CHIPS Act money.

How and when the money will be distributed

The trip comes as the Biden administration has released more details on how it will distribute the $50 billion beginning in 2023, which will be available to both U.S. and foreign companies that build facilities in the U.S.

The Biden administration says companies will also be held to tight restrictions so the money doesn’t inadvertently help China or fund stock buybacks.

Licking County, Ohio is where Friday’s groundbreaking will take place. The empty land is just outside of Columbus and — if Intel’s ends up spending the entire $100 billion in coming years — it could hold as many as eight plants and would be the state’s biggest economic development project in history.

Ohio’s Republican governor, Mike DeWine, will attend the groundbreaking, according to Intel, as will Rep. Tim Ryan (D-OH) who’s running in a close race to flip one of Ohio’s U.S. Senate seats this fall.

Construction will now begin on two factories that Intel says will come online in 2025 — creating around 7,000 construction jobs in the coming years and then 3,000 permanent jobs once it’s complete.

The CHIPS Act money will go directly to companies like Intel that can apply beginning in February 2023. Around $28 billion will go to spur new leading-edge manufacturing efforts such as Intel’s. The rest will be fund what the Commerce Department calls “mature and current-generation chips” (approximately $10 billion) and research and development efforts ($11 billion) — including the creation of a National Semiconductor Technology Center.

Biden officials hope the money will be actually out the door by next spring and promise a range of projects will receive funding — from modest expansions of existing facilities to complex projects like Intel’s.

The Chips and Science Act also has other initiatives, including $4.2 billion towards the mobile broadband market and a new “Advanced Manufacturing Investment Credit,” which creates a 25% tax benefit for semiconductor manufacturing.

Ben Werschkul is a Washington correspondent for Yahoo Finance.