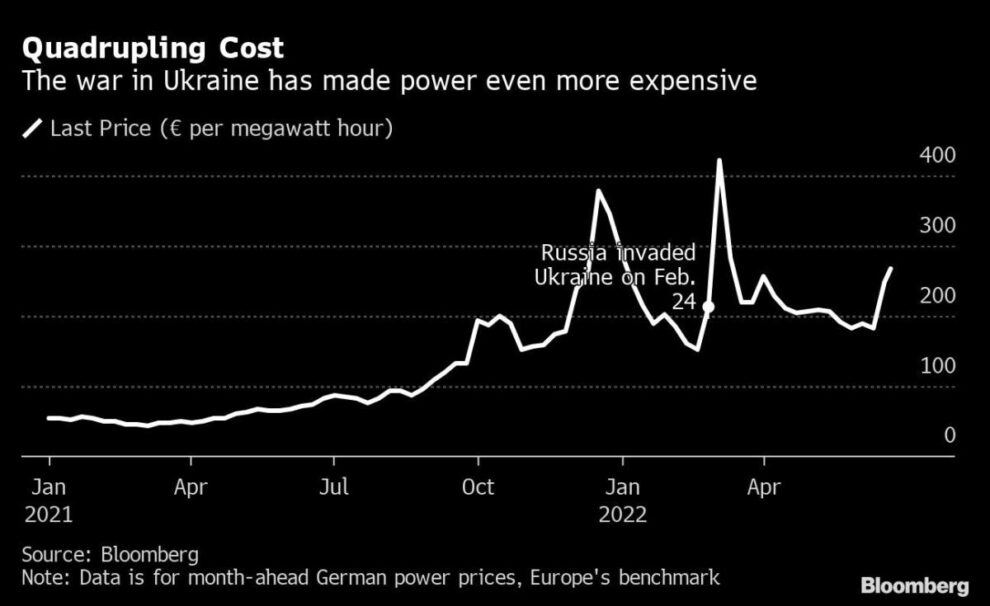 (Bloomberg) -- When Google wanted to build a new $1.1 billion data center in the Luxembourg countryside, the government championed the investment and helped the company to acquire the land. Authorities in the Netherlands granted Meta Platforms Inc. permission for what promised to be an even bigger one, part of the country’s ambition to become Europe’s “digital hub.”Most Read from BloombergThe World’s Bubbliest Housing Markets Are Flashing Warning SignsJuul Soon to Be Ordered Off the Market by FD Read More... 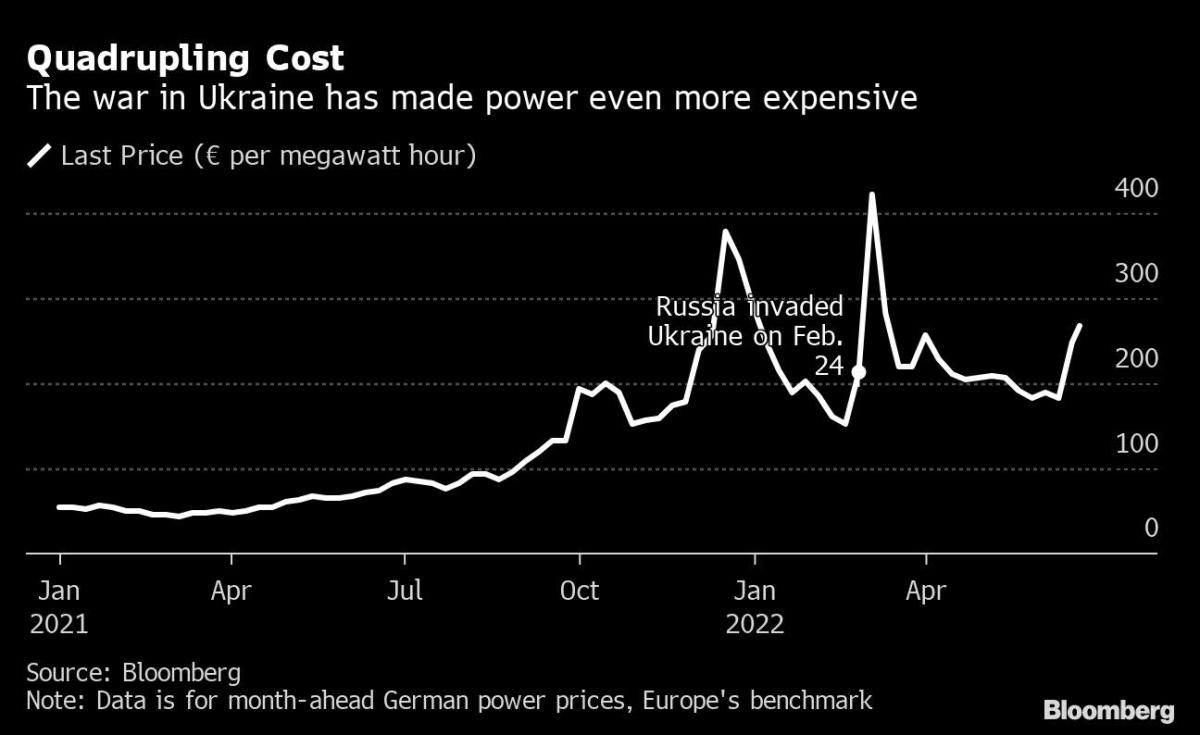 (Bloomberg) — When Google wanted to build a new $1.1 billion data center in the Luxembourg countryside, the government championed the investment and helped the company to acquire the land. Authorities in the Netherlands granted Meta Platforms Inc. permission for what promised to be an even bigger one, part of the country’s ambition to become Europe’s “digital hub.”

With a squeeze on energy supplies because of Russia’s war on Ukraine, the political metrics are now changing for the giant facilities. The two projects were paused after grassroots resistance from locals and environmental activists. But when the focus is on ensuring the lights stay on this winter, data computing and storage that can guzzle a small town’s worth of power are no longer as in vogue for some European governments.

Luxembourg, the Netherlands, Belgium, Germany and Denmark have teamed up to propose stricter efficiency measures at a meeting of European Union energy ministers on June 27. The aim is to get all 27 member states to sign up to the same rules on big tech to protect the EU’s green energy targets. That means putting a tighter rein on the facilities that handle everything from social media posts to apps for businesses.

“If we don’t act on data centers, we are losing some of the potential to exit gas and help the energy transition,” said Claude Turmes, Luxembourg’s energy and spatial planning minister and a member of the Green Party.

Record prices are spurring EU countries to figure out how to consume less electricity. The dilemma is how to reconcile the bloc’s green agenda with European Commission President Ursula von der Leyen’s priority of ensuring the EU leads the transition to a new digital world.

Data centers in the EU accounted for 2.7% of the bloc’s electricity demand already in 2018 and the continual digital transformation means more and more people spend their time browsing the internet, shopping online or streaming movies. Left unchecked, that could rise to 3.2% by 2030, the European Commission said — or consumption of almost 100 terrawatt hours. That’s roughly twice the power that Greece used in 2019.

The energy regulator in Ireland, home to one of the largest clusters of data centers, recently warned consumers could eventually face outages without a new policy on access to the power grid. It predicted data centers could account for 23% of Ireland’s electricity demand by 2030.

Tech giants running data centers in Europe say they already abide by their own high green standards. Meta said its hubs have achieved net-zero carbon emissions and are supported by 100% renewable energy. Microsoft Inc. is aiming to reduce the consumption of water, used for server cooling systems, in its operations by 95% by 2024.

The question is whether that’s the right way to deploy green resources in the current climate, said Julia Krauwer, a technology analyst at Dutch bank ABN Amro. “For a lot of individuals and politicians, the fact that we use energy from newly constructed wind parks for the benefit of hyper-scale data centers feels out of balance,” she said.

The push by policy makers to green up the tech industry comes as the EU debates its massive package unveiled last year to implement an ambitious objective to slash greenhouse gases by at least 55% this decade from 1990 levels.

The plan will affect every corner of the economy, introducing new goals to boost renewables and step up energy savings, requiring companies to lower their carbon footprint and forcing a shift to cleaner transport.

Then came President Vladimir Putin’s invasion of Ukraine in February. In response, the EU announced it would phase out fossil fuels imported from Russia and proposed increasing the renewables and energy efficiency targets for 2030 even further.

Luxembourg’s Turmes and his allies aim to introduce more stringent reporting requirements for data centers, including on carbon emissions, the use of renewable energy and the effectiveness of power, cooling and water usage. The five countries also want to empower the commission to set minimum performance criteria.

There are currently no binding comprehensive EU-wide standards on energy efficiency at data centers, which are set to proliferate across the continent. The Netherlands, for example, already houses hyper-scale facilities for Alphabet Inc.’s Google and Microsoft and is facing applications for 20 to 25 new or expanded data centers.

Meta, the owner of Facebook, WhatsApp and Instagram, was planning its new investment in the Dutch town of Zeewolde, 55 kilometers (34 miles) east of Amsterdam. The company initially received a warm welcome from politicians in 2019.

Three years later, local party Leefbaar Zeewolde — or “Livable Zeewolde” in English — won a regional vote leading its campaign on opposition to the facility. Covering 166 hectares, the equivalent of roughly 230 football pitches, it would be the largest in Europe.

Just before the election, the Dutch government in February announced a nine-month block on permits for new data centers larger than 10 hectares and that require more than 70 megawatts of energy. Ministers, however, exempted the region of Zeewolde and the provinces where Google and Microsoft already host their hyperscale centers.

Meta’s center was to be “one of the most efficient in the world,” with nearly every watt entering the data center to be used to run the computing equipment, according to local authorities. Still, it was expected to use 1,380 gigawatt hours of energy, an amount comparable to twice the total consumption of Zeewolde, a town of about 23,000 people, the development plans showed.

That highlighted the scale of the challenge for Europe when energy is more scarce, said Guus Dix, assistant professor at the University of Twente and a climate activist for Extinction Rebellion who participated in the campaign against the Zeewolde data center. “We only have limited energy available, and we have other needs as well, like greening our houses and becoming less dependent on Russian oil and gas,” he said.

Meta announced in March it would halt plans for the data center as it prides itself on being “good neighbors” and stressed the importance of the project of being a “good fit” for the community.

In Luxembourg, Google agreed to acquire farmland in the commune of Bissen in 2017 before progress on its data center was delayed by opponents. Mouvement Ecologique lost its main legal challenge attempting to stop the land being reclassified as for industrial rather than agricultural use, according to Blanche Weber, president of the campaign group. But as of this year, no work has started.

A Google spokesperson said the site is ready, but the company has no further plans at the moment. The government wants the company to make a decision and says if Google chooses to go ahead, it will have to deploy the most energy-efficient technology.

But even if the biggest companies already use the latest innovations to reduce their environmental footprint, the shift towards greening the sector may not be happening fast enough across the board given the new focus on energy security, according to Merima Dzanic, chief operating officer of the Danish Data Center Industry, an association that promotes the industry in Denmark.

“Suddenly there’s a huge urgency because of the prices and because of the war that we’ve never really seen before,” she said. “At the end of the day, with the data center industry it is very much in the DNA to constantly focus on sustainability because it is in the businesses interest.”