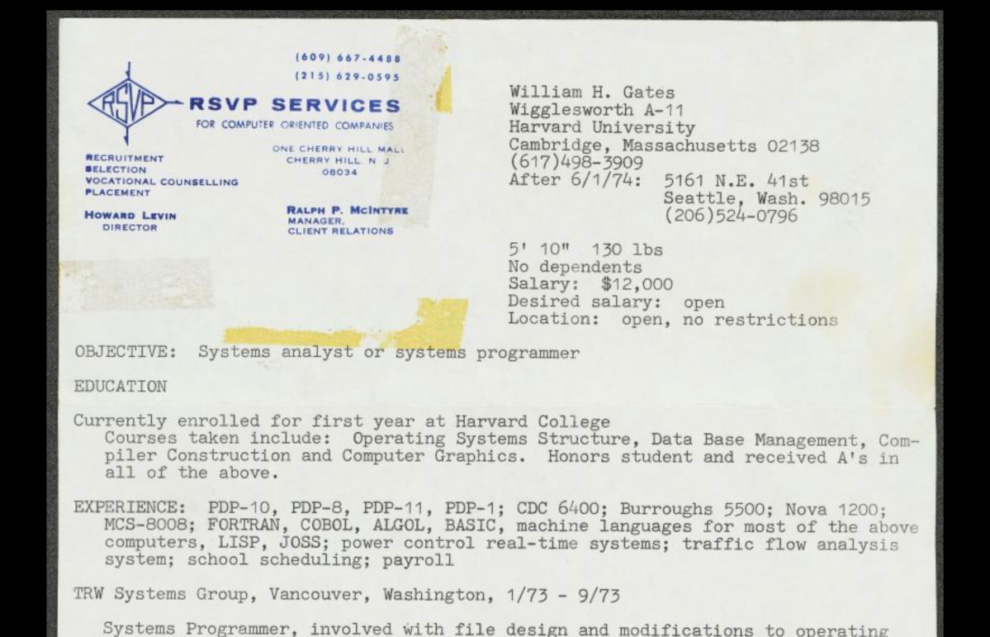 Bill Gates shared his résumé from freshman year of college on LinkedIn, and it included a few mistakes. One of them: including his height and weight. Read More... 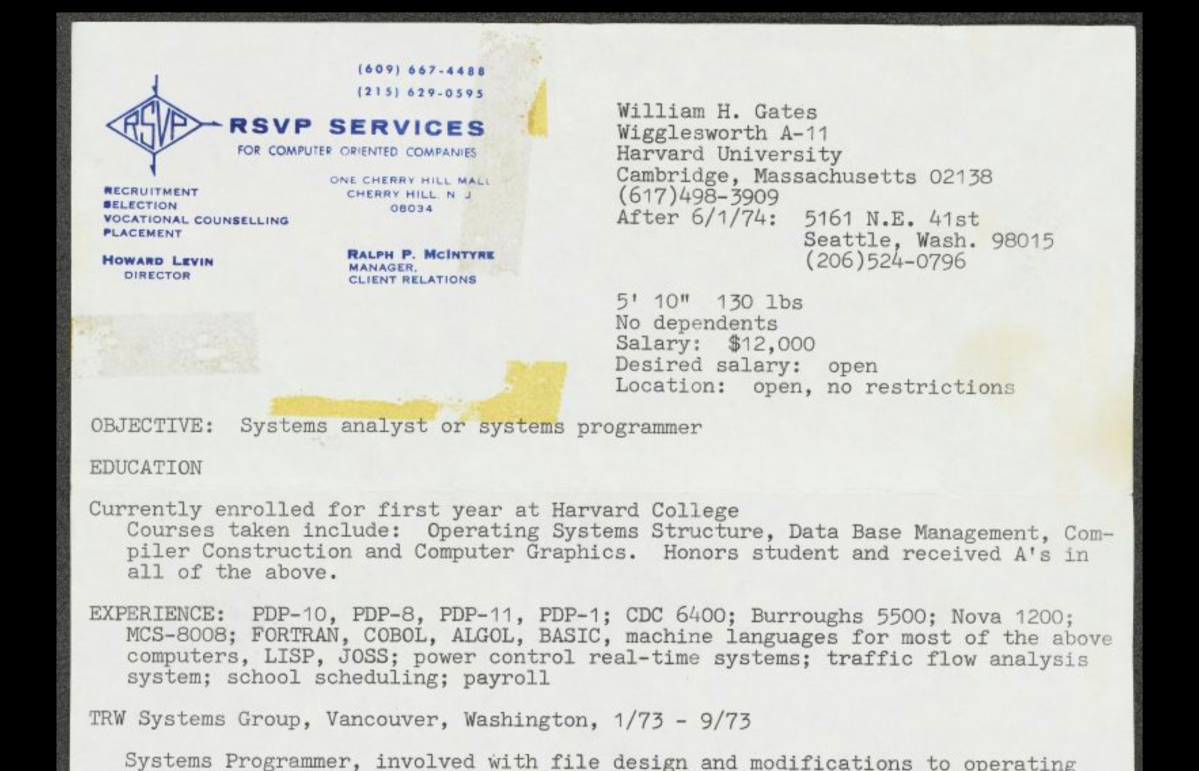 Bill Gates, Microsoft cofounder and fourth-richest man in the world, returned to his humble roots on Thursday: He shared his résumé from nearly 50 years ago.

“Whether you’re a recent grad or a college dropout, I’m sure your résumé looks a lot better than mine did 48 years ago,” Gates quipped in a LinkedIn post.

Before diving into his education and work experience, Gates included his “objective”: systems analyst or system programmer. He backed it up with his relevant Harvard coursework, his coding skills from two different jobs in his native Seattle area, and the small fact that he’d worked in partnership with Paul Allen—with whom he would officially found Microsoft the following year.

Gates’ résumé may have been par for the course in 1974, but it includes a few details that today’s experts advise against.

Mistake No. 1: Going too deep

The résumé, which Gates wrote on a typewriter at age 18, includes his then-address (his freshman dorm) as well as some personal details that would be way out of place today. He notes his height (5’10”), his weight (130 pounds), and the fact that he has no dependents.

Gates should have avoided including such irrelevant information. “Sure, you’ve got hobbies, interests, languages, favorite bands, and ambitions,” Marc Cenedella, founder of Leet Résumés, a résumé writing service, told Fortune. “But keep the information that doesn’t address your ability to be responsible, accountable, and a hard worker to a reasonable level.”

Mistake No. 2: Lack of verb variety

While the exact line-by-line format of a résumé can vary, Beth Hendler-Grunt, founder of career coaching service Next Great Step, emphasizes using action verbs to show what you accomplished in each role. She advises against saying “responsible for” at the beginning of each sentence—as in, “I’m responsible for the office filing system.”

Instead, use past-tense action verbs, like “built,” “created,” or “developed”; consider, “I developed a filing system that streamlined the office organizational flow.” And try to use different verbs for each experience.

While Gates used “designed” to demonstrate a traffic system he created, his action verbs stopped there. He leaned heavily on “involved with,” which is more passive and repetitive.

We’ll allow Gates some stylistic choices that don’t make sense today: namely, the business card for what looks like a career services company copied onto the top-left corner. This is especially bad, because it’s in prime real estate where the résumé reader’s eye is going to be drawn first. In that area, you want to stack your accolades, education, and achievements right away—not provide free ad space for a company.

The placement and color makes the résumé appear busy, which Cenedella highly warns against.

Other than that, Gates’ style and format are fairly consistent with a typical recruiter’s expectations. Despite the flaws, it’s safe to say Gates knew what he was doing. Twelve years after he hit “submit” on that résumé, he became a billionaire. Six years after that, he became the world’s richest man.

Maybe the secret to success really is including your height—but we wouldn’t count on it.