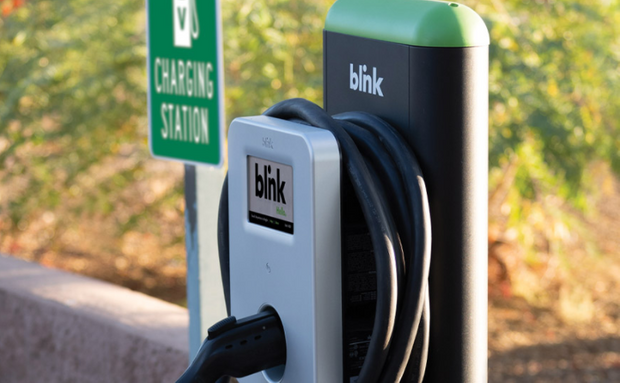 Shares of Blink Charging Co. zoomed higher again on heavy volume Friday, to more than double in a week, as the electric-vehicle sector continued to attract investor interest. Read More...

Shares of Blink Charging Co. zoomed higher again on heavy volume Friday, to more than double in a week, as the electric-vehicle sector continued to attract investor interest.

The Florida-based electric vehicle charging equipment maker’s stock BLNK, +23.61% jumped 23.6% to $22.67 on Friday, the fifth straight gain and the highest closing price since Aug. 18, 2017, despite no news released by the company that day. Trading volume of 44.2 million shares was more than seven times the full-day average of about 6.0 million shares.

The shares skyrocketed 133.7% last week, making it the best performer among the Nasdaq Composite Index’s COMP, -0.41% components over that time.

The last news released by the company was before the Nov. 16 open, when it introduced a new “cable management” product, that helps manage cords for both rectangular and triangular pedestal charging stations.

“Regarding the recent uptick in our stock price, as you know, there is currently a great deal of market interest in the EV sector, and Blink is uniquely positioned on the infrastructure side of the equation as EV adoption continues to grow and investors are recognizing that,” Rebecca Gutierrez, vice president of marketing at Blink, wrote in an emailed response to a MarketWatch request for comment.

To Gutierrez’s point, three of the Nasdaq Composite’s top four performers last week were in the EV sector.

What may have also fueled interest in EV stocks on Friday, Kansas City Federal Reserve President Esther George spoke about consumers’ declining dependence on gasoline, as well as the growth of the electric vehicle market, and how it posed a “significant threat” to even other renewable energy sources, such as ethanol.

Blink’s Gutierrez said she believes the company is “unique” because it realizes recurring revenue from its charging stations, which are owned by the company, and can tailor the deployments to customers’ needs.

The road hasn’t been exactly smooth since Blink’s stock started trading over-the-counter in 2008. The stock has undergone two 1-for-50 reverse splits, in February 2011 and August 2017, in an effort to boost the stock price. The latest reverse split helped the stock get listed on the Nasdaq exchange in February 2018. Read more about reverse stock splits.

The stock took a hard hit in August 2020, falling 38.5% during the week ended Aug. 21, after short seller Culper Research issued a report alleging Blink “vastly exaggerated” the size of its EV charging network. Rather than the 15,000 charging stations the company claimed to have functioning, Culper estimated the network consisted of less than 2,200 charging stations.

Blink responded by saying the report was “false, manipulative and defamatory.” The company said at that time that it stood by data provided in its public filings and that it was reviewing all legal options in the face of the “baseless” attack on the share price.

More recently, the stock dropped 7.1% on Nov. 13, just before last week’s five-day rally kicked off, after Blink reported a third-quarter net loss that widened to $3.9 million, or 12 cents a share, from $2.6 million a year ago, while revenue rose 18% to about $900,000. That was worse than the estimates of two analysts surveyed by FactSet for a per share loss of 9 cents to 11 cents and for revenue of $1.0 million to $2.3 million.

Still, with last week’s rally, the stock trades at multiples of the two analysts’ price targets of $5 and $8.

“We believe our owner/operator model represents a tremendous opportunity to drive recurring revenue growth as more EVs take to the road and require the infrastructure and services that Blink provides,” Gutierrez said.

Twilio (TWLO) to Report Q2 Earnings: What's in the Cards?

The Margin: Juul claimed its e-cigs are ‘totally safe,’ but the case against vaping keeps building

Aurora Cannabis stock suffers worst day in more than five years, analyst says ‘it would be fair for investors not to believe them’

The SEC recently quizzed Tesla about its accounting, filings show

The Tell: Don’t laugh, here’s why the ‘great rotation’ from bonds to stocks could finally happen in 2020