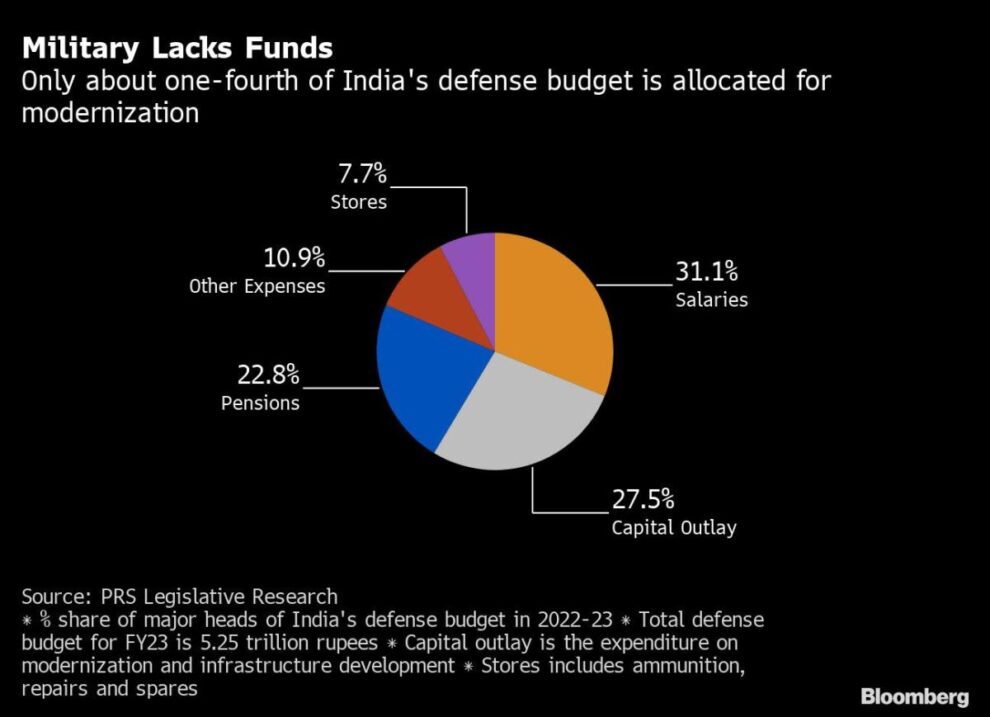 (Bloomberg) -- A military recruitment plan in India that sparked last month’s violent protests is turning the spotlight on an unemployment crisis plaguing the $3.2 trillion economy, along with Prime Minister Narendra Modi’s campaign pledges on jobs.Most Read from BloombergUS Mortgage Rates Plunge to 5.3% in Biggest Drop Since 2008Tycoon Whose Bet Broke the Nickel Market Walks Away a BillionaireMusk Tweets About Underpopulation After Report He Fathered Twins With EmployeeBoris Johnson Odds: Who A Read More... 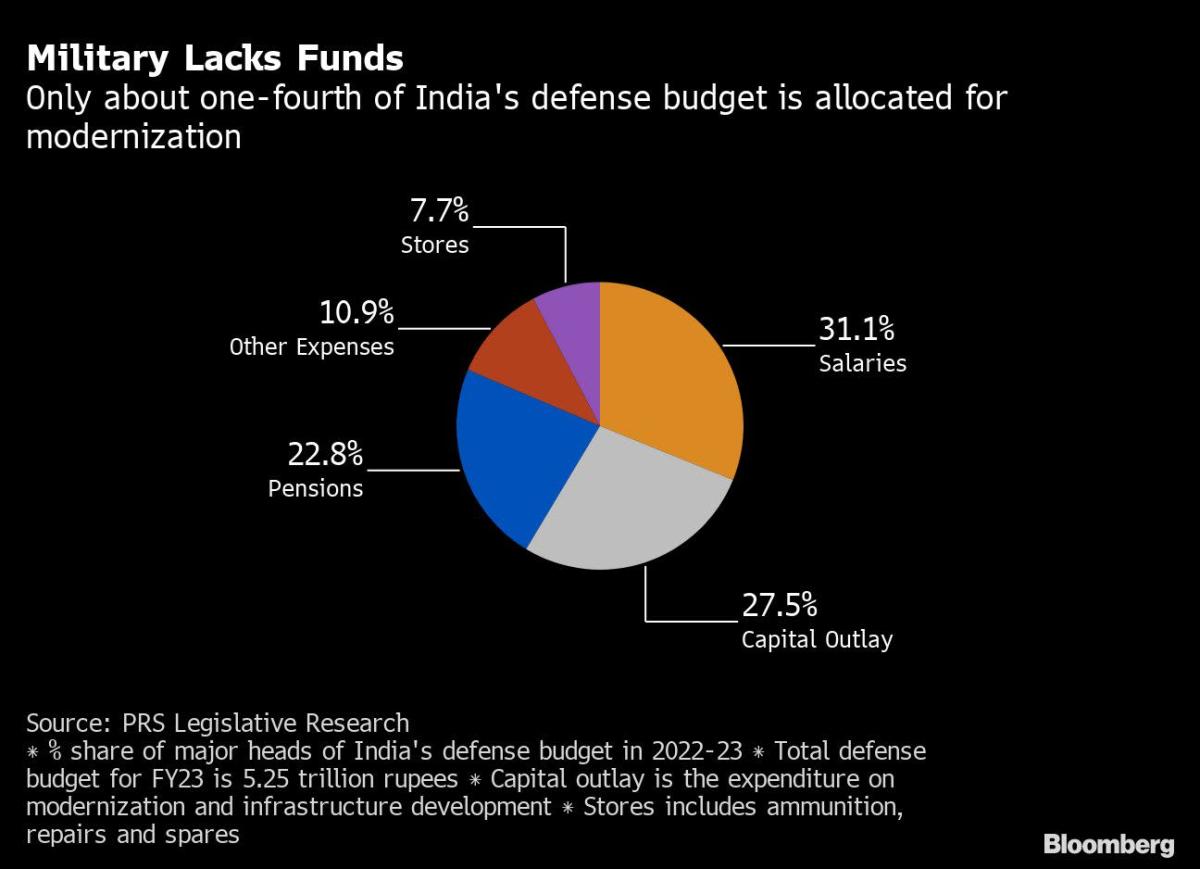 (Bloomberg) — A military recruitment plan in India that sparked last month’s violent protests is turning the spotlight on an unemployment crisis plaguing the $3.2 trillion economy, along with Prime Minister Narendra Modi’s campaign pledges on jobs.

Behind the unrest is a new policy to enlist young men as soldiers on four-year contracts without pension, replacing the current 15-year service that entails full retirement benefits. Modi’s government says the program will boost employment by supplying a trained, disciplined workforce to local industry. Critics say that it would be similar to hiring for the gig economy and won’t lead to high-quality jobs. The program has already started luring a record number of applicants, but it has also provoked a furious backlash from some quarters.

Many pinning their hopes on the military for a secure future say the shortened term has delivered a gut-punch to their career plans. Some others say it deprives them of higher education in their prime years, and worse still, offers no job assurance after completion. Angry youth facing bleak job prospects blocked rail traffic, highways in many states for days about three weeks ago. Some even set trains on fire.

The intensity of those protests has largely died down now, but the rage hasn’t. With the backing of opposition parties and other powerful lobby groups such as farmers, they’re all betting Modi will drop the idea, just like he buckled under pressure earlier to scrap planned farm-produce and land-ownership reforms.

Modi, however, is undeterred. After vowing to create millions of jobs in his campaign speeches, he is under tremendous pressure to show he’s making progress on those promises. The army hiring program — called “Agnipath,” or path of fire in Hindi — is one of his key game plans to win a third consecutive five-year term. Yet, with the next national elections less than two years away, time isn’t on his side. Runaway inflation is threatening to derail a fragile post-pandemic economic recovery, while discontent continues to simmer over unemployment.

About two-thirds of India’s almost 1.4 billion people are between the ages of 15 and 64. More than half of the 900 million of legal working age have given up looking for formal or informal jobs. Highlighting the scale of despair, 18,000 people — including Ph.D. students — applied for 42 government-advertised positions as cooks, gardeners and peons in the northern state of Himachal Pradesh last year. Catering to this scramble for coveted public-sector jobs, Modi has unveiled a separate plan to hire a million people within 18 months to fill vacancies in various government departments.

“While unemployment is a big issue, unemployment combined with high inflation is an even bigger issue,” said Akhil Bery, director of South Asia Initiatives at the Asia Society Policy Institute. “The protests just add to the number of challenges the government is facing.”

Yet Modi’s political star faces little risk of fading. A survey released by LocalCircles in May showed his approval ratings were at the highest since the start of the pandemic. About 67% of 64,000 people polled said his government has met or exceeded expectations in the second term. But inflation and unemployment remain a concern, according to the survey.

Many unemployed, young people believe Modi is talking about jobs now because of impending elections, but they are still unwavering in their support for the leader.

“I voted for Modi last time, and will vote for him again,” said Parmanand Yadav, 24, who lives in Rewari in the northern state of Haryana. “He might not have created jobs, but under him there is less corruption and better infrastructure.”

More broadly, the violent backlash has exposed the failure of successive governments to address the unfolding crisis as population nearly quadrupled to almost 1.4 billion in 70 years. It also brings into focus the economy’s over-reliance on the public sector for jobs and an inadequate education infrastructure that can’t supply enough skilled workers for local industries, despite having produced some of the world’s top managers such as Alphabet Inc.’s Sundar Pichai and Microsoft Corp.’s Satya Nadella.

The Centre for Monitoring Indian Economy estimates the unemployment in the 20-24 age group was 43.7% in June and the overall rate was 7.8%. That compares with 18.4% for the 16-24 category in China, which is also facing a worsening crisis as it struggles with Covid-19 outbreaks and disruptive shutdowns. Employment generation hasn’t kept pace with economic growth, making competition fierce, particularly for government jobs that promise stability and life-time benefits.

The allure of state jobs dates back to the days of Soviet-style central planning, when the government had monopoly over a range of industries from airlines to steel production and banking. When the economy was liberalized in parts starting in the 1990s, the private sector — including technology, telecommunications and gig-economy startups like food-delivery service Zomato Ltd. and ride-hailing service Ola — has helped add jobs. However, the pace hasn’t been quick enough to absorb the millions graduating from schools and colleges every year.

Then there’s the military. India’s army, navy and air force usually take in about a combined 65,000 annually, with an equal number retiring every year. Some communities have traditionally relied on the defense forces for their livelihood, grooming generations for long military careers.

Many training academies operated by retired army brass have mushroomed around some of these regions, preparing men in their late teens and early 20s for a shot at a military career.

“But the new policy has lowered morale’’ and shattered the dreams of aspirants, said Jai Bhagwan, director of Haryana Lions Defence Academy, based in Dongra Ahir village in Haryana. Students there pay as much as 7,000 rupees ($88) a month each as fees.

In a small village of Pranpura in the same state, a three-hour drive from capital New Delhi, scores of men in their early 20s lounge about with a sense of dejection.

“This way, I will retire before I turn 25,” said Deepak Yadav, 20, adding he took part in some of the peaceful protests. “Our parents started motivating us from an early age to join the army because other jobs are not easily available. Now nothing is left.”

The defense recruitment plan is for those aged between 17 ½ and 23. After completing the four-year program, 25% will be inducted into regular service. The broader aim is to make the armed forces younger and fitter. The other objective is to slash pension bills and boost spending on military modernization — an issue that’s gained urgency after deadly border clashes with Chinese troops in 2020. Only a quarter of India’s defense budget is allocated for modernization, according to PRS Legislative Research.

Despite all the criticism, the recruitment plan is already gaining enough traction. The Indian Air Force said it has received a record 750,000 applications, while the army and navy have yet to provide numbers.

The protests by the unemployed have been nowhere close in scale to last year’s uncompromising, months-long demonstrations by farmers, who camped outside New Delhi in what was practically a siege of the national capital, until Modi caved in and repealed three contentious farm laws. Yadav and others want to replicate that successful strategy to get Modi to scrap the defense recruitment policy.

“If we protest like farmers, why won’t they take it back?” said Yadav, vowing to cast his first vote for the party that promises job opportunities for him.

Political parties and farmers are now rallying behind the unemployed, sensing an opportunity to dent Modi’s poll prospects. Petitioners seeking to void the plan have approached the Supreme Court, which will hear their pleas next week. Some leaders are also saying the short-term contract will blunt the operational effectiveness of the armed forces.

“This is not a fight for youth and employment, this is a fight for the nation’s future,” political activist Yogendra Yadav told a gathering of farmers on June 24 in Rewari, about 20 kilometers from Pranpura village. “This is just the beginning of the agitation. As an employment opportunity, it’s a joke,” he said, referring to the defense recruitment plan.

The three Yadavs are unrelated to one another.

The government says employment generation is its primary concern, and has cited various data to support its stance that the labor market is recovering after the pandemic. On the other hand, Modi’s opponents say he’s failed to keep his promises. Representatives for the Prime Minister’s Office and the labor ministry didn’t respond to emails seeking comment.

One possible fix for the unemployment crisis is to incentivize the private sector to create jobs at a fast pace and take the sheen off the defense recruitment process, said Devashish Mitra, an economics professor at Syracuse University in New York.

“The solution really is factor-market reforms,” he said, referring to changes in land and labor laws. “Otherwise, there are likely to be continuing protests, that might fuel economic instability.”

Until then, there’s no end in sight for the anxiety faced by thousands training to join the army.

“Now I have only one chance left,” said Dilshad Khan, 21, who comes from a family of soldiers and is now training at the Haryana Lions Defence Academy. “It’s do or die now.”