Millions of tech workers are slowly making the migration back to offices as millions become fully vaccinated and states lift restrictions. But many of those returning may not recognize their new digs. Read More... 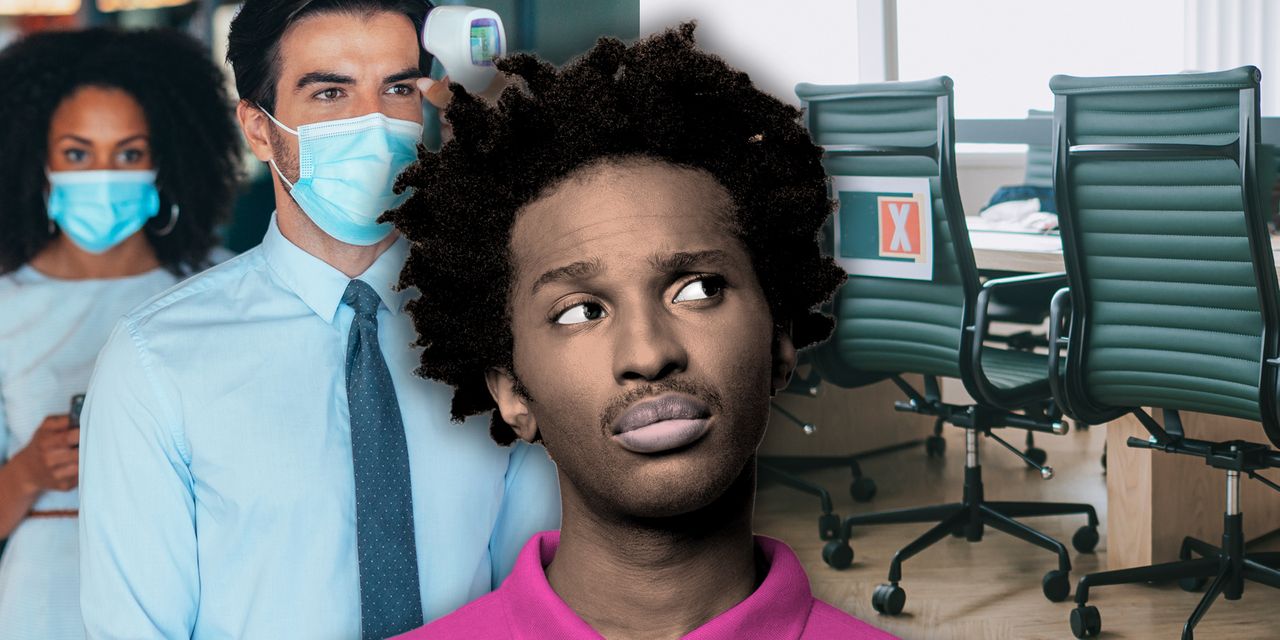 As they return to work, employees of website platform Contentful Inc. are getting an eyeful of their new offices in Berlin and Denver and a realigned headquarters in San Francisco, which include hallmarks of the post-pandemic workplace — a theater in Berlin and group rooms in San Francisco that are devoted to interactive meetings, with kitchen space doubled.

“We think the office is a social place first,” Contentful Chief Executive Steve Sloan told MarketWatch. “The office is where the great ideas are hatched — especially in an idea-centric economy.”

Millions of tech workers are slowly making the migration back to offices as millions become fully vaccinated and states lift restrictions. At Contentful, all 550 employees, including Sloan, will continue to work from home most of the time, and occasionally venture into the office for socializing and collaboration.

But many of those returning may not recognize the new digs, which are largely being designed to foster a nexus of ideas shared in theater-like settings and socially-distanced conference rooms, with specialized break-out areas for brainstorming and socializing. Workers will need to get used to the new office lingo of dynamic spaces and hoteling.

“It’s about going into the tunnel, and coming out of the tunnel,” VMware Chief Operating Officer Sanjay Poonen told MarketWatch, about a conservative return to the office. “This is sort of like a traffic jam — you slow down, and then gradually regain speed. We will get back to normalcy.”

Tech companies — among the first to ask employees to work from home during the pandemic — are leading the return to the office by the fall. Their reopening plans offer a glimpse into office life of the next few years, with a heavy emphasis on a hybrid work model and three-day work weeks onsite, as well as no vaccine requirements. California’s COVID-19 state of emergency order will remain in place beyond June 15, despite plans to fully reopen the state’s economy on that date, Gov. Gavin Newsom said Friday.

“Three days a week [in the office] is the new five,” Twilio Inc. TWLO, -0.82% Chief People Officer Christy Lake told MarketWatch, noting that 77% of the company’s employees said they miss the office. “The claims that ‘the office is dead’ are over-hyped. The truth is that the reasons people come into the physical office are changing.”

Dynamic spaces will occupy a key part of Twilio’s plans. The San Francisco-based company has revamped offices with specific areas for open collaboration, community and socializing, heads-down work, and flexible multipurpose spaces, said Lake, who added that some employees will trickle back to Twilio’s Bay Area offices beginning July 14. Employees have the option of working from home throughout the year.

Pre-pandemic, many in Silicon Valley were already on the path to a hybrid situation. Advances in videoconferencing technology and bandwidth had given them the luxury of working from home several days a week to avoid car-choked freeways. And employers were OK with the arrangement to scoop up talent from across the country. What COVID did was accelerate a work trend that was already clearly in motion, said Heather Kernahan, global CEO at PR agency Hotwire.

“It’s not going ‘back to work.’ We’ve been working hard,” Kernahan said. “Thoughtful working is what you do, not where you go.”

An exodus back to the office is likely to occur by September, based on data collected by real-estate company Savills, which surveyed more than 120 tech companies in March. More than half said they expect to be back in the office by the third quarter of this calendar year.

Silicon Valley’s largest employers, sitting on millions of square feet of land they own, have been particularly aggressive in dictating when workers get back. How that pans out in an era when employees are increasingly outspoken about work conditions, including the option to work exclusively from home, bears watching, say labor experts.

While employees at smaller companies have overwhelmingly shown a preference to return, those at Apple and other behemoths aren’t so sure, given the large number of people congregating in one place.

Shortly after Apple Inc. AAPL, +0.31% pronounced employees must work in the office at least three days a week (Monday, Tuesday and Thursday) beginning in early September — including at Apple Park, the futuristic “spaceship”-like headquarters in Cupertino, Calif., that the company spent an estimated $5 billion to design and build — some workers pushed back.

“We would like to take the opportunity to communicate a growing concern among our colleagues,” Apple employees said in a letter to Apple CEO Tim Cook. “That Apple’s remote/location-flexible work policy, and the communication around it, have already forced some of our colleagues to quit. Without the inclusivity that flexibility brings, many of us feel we have to choose between either a combination of our families, our well-being, and being empowered to do our best work, or being a part of Apple.”

Google parent Alphabet Inc. GOOGL, +0.40% GOOG, +0.34% said it expects about 20% of its workforce to remain fully remote this fall, while 60% will work a hybrid office/home mix.

Facebook Inc. FB, -1.03% employees have returned to a 10% maximum capacity at corporate headquarters in Menlo Park, Calif., and other select San Francisco Bay Area offices. Facebook is likely to fully reopen most U.S. offices by October, and non-remote employees will work in offices at least half the time. The company and Twitter Inc. TWTR, +1.53% have said employees will be allowed to permanently work from home if their jobs allow for it.

MarketWatch talked to at least 20 companies, and a handful, including Twilio and Box, require employees to be vaccinated before returning to the office. Facebook and Amazon.com Inc. AMZN, +0.52%, for example, only encourage employees to vaccinate.

Others, however, have taken a more measured approach.

Salesforce.com Inc. CRM, -0.14% reopened its first U.S. office, the Salesforce Tower headquarters in San Francisco, in May. Offices in Palo Alto, Calif., and Irvine, Calif, will follow in the coming months. At the same time, the company extended the option for all employees to continue to work from home through the end of 2021.

Okta Inc. OKTA, -0.06% is shifting from large, campus-type locations serving regions to distributed offices based on where employees live. The new offices will function like Apple stores — an “experiential place” where customers and partners can learn about products and chat with experts, and employees can collaborate as needed, an Okta spokeswoman told MarketWatch.

Box Inc. BOX, -1.16% is opening its San Francisco office in mid-July and its Redwood City, Calif., headquarters in early August at limited capacity, per local regulations. What its workers will encounter is a mix of assigned desks and hoteling, a form of office management in which workers schedule their use of desks, cubicles and offices. But travel remains prohibited until at least later this summer, and quarterly all-hands meetings will remain virtual through Feb. 1, 2022.

German software giant SAP SAP, -1.20%, which has a Palo Alto, Calif., campus, opened its offices in late April at less than 5% daily capacity for “employees who choose to return to the office for business critical needs,” a spokesperson said.

Then there are outliers like VMware Inc. VMW, -0.04%, where few employees currently work onsite. The company is offering employees the choice to permanently work from home as part of a digital-first approach. VMware prohibits meetings and events of more than 10 people at the office — a policy that will remain in effect until at least July 30. Few employees are currently working at the office, according to the company.

Boatsetter Inc., an online platform for boat rentals in Florida, went to the extreme and shed 6,000 feet of office space.

Whether employees are entirely open to the idea of returning full-time in the foreseeable future is another matter.

About one in three (34%) working from home said they would look for a new job if forced to be in the office full time, and nearly half (49%) prefer a hybrid arrangement, according to a Robert Half poll of 1,000 U.S. workers in March.

“After a year of drastic change, many business leaders are eager to restore a sense of normalcy and welcome staff back to the office,” said Paul McDonald, senior executive director at Robert Half. “But reopening doors will bring new obstacles for companies to navigate. Not all employees will be ready — or willing — to return to the workplace, so staying flexible and responsive to their needs will be critical.”

Nearly nine in 10 employees (89%) say they want to be allowed to work remotely some or all of the time, according to a survey of almost 209,000 people in 190 countries by Boston Consulting Group and The Network.

Conversely, employees at smaller companies are more eager to return than those who work for tech giants.

A vast majority of employees (77%) at Qualtrics International Inc. XM, -0.26% crave a return to collaborate with colleagues, the company told MarketWatch. Fewer than 5% said they didn’t want to return to a physical office at all.

The experience-management software company is proceeding with plans for most employees to work from an office roughly three days a week, beginning Sept. 1. “This will give us time to build out an incredible workplace experience across digital, hybrid, and the office,” a company spokeswoman told MarketWatch. This means adding more private space for employees to take calls and do uninterrupted work. Qualtrics’ new Seattle co-headquarters will have staircases between floors — a rarity in skyscrapers — to increase the flow of people and ideas across floors, a company spokeswoman said.

PagerDuty Inc. PD, +0.03% said 54% of its employees still want access to an office, but only one to three days a week.

Employers, especially at mid- to small-sized tech firms, have polled the rank and file on what type of office they hope to return to, with health and safety measures near or at the top of the list. To that end, companies are deploying touchless elevators and doors, mask technology, air and surface cleansers, reconfigured offices with flexible schedules, on-site temperature-taking and contact tracing to assuage jittery workers. Some have integrated smart-lighting solutions for commercial buildings. UV lights can identify and kill germs on surfaces in kitchens, bathrooms and conference rooms.

Health and safety, then as now, is at the forefront for every company. AppZen Inc. CEO Anant Kale said his artificial-intelligence software company in Sunnyvale, Calif., like many others, has devised a socially-distanced office, with employee sign-up sheets to maintain capacity limits, and arranged in-office lunch orders to be delivered daily to reduce employees coming and going into the office.

Okta has upgraded its facilities with air-filtration systems; added touchless faucets, soap dispensers, and doors; installed voice-enabled hands-free Zoom conference rooms; and now uses a new Atmosphere app for health screens, which lets co-workers plan on being in the office.

Market Extra: Corporate bond issuance off to a bang in September

NewsWatch: After the yield curve inverts — here’s how the stock market tends to perform since 1978

Five reasons to buy cannabis stocks at these attractive levels

VMware (VMW) to Report Q1 Earnings: What’s in the Cards?