A court date on an early test is coming up later in May, and that's just one of several lawsuits making their way through the system. Read More... 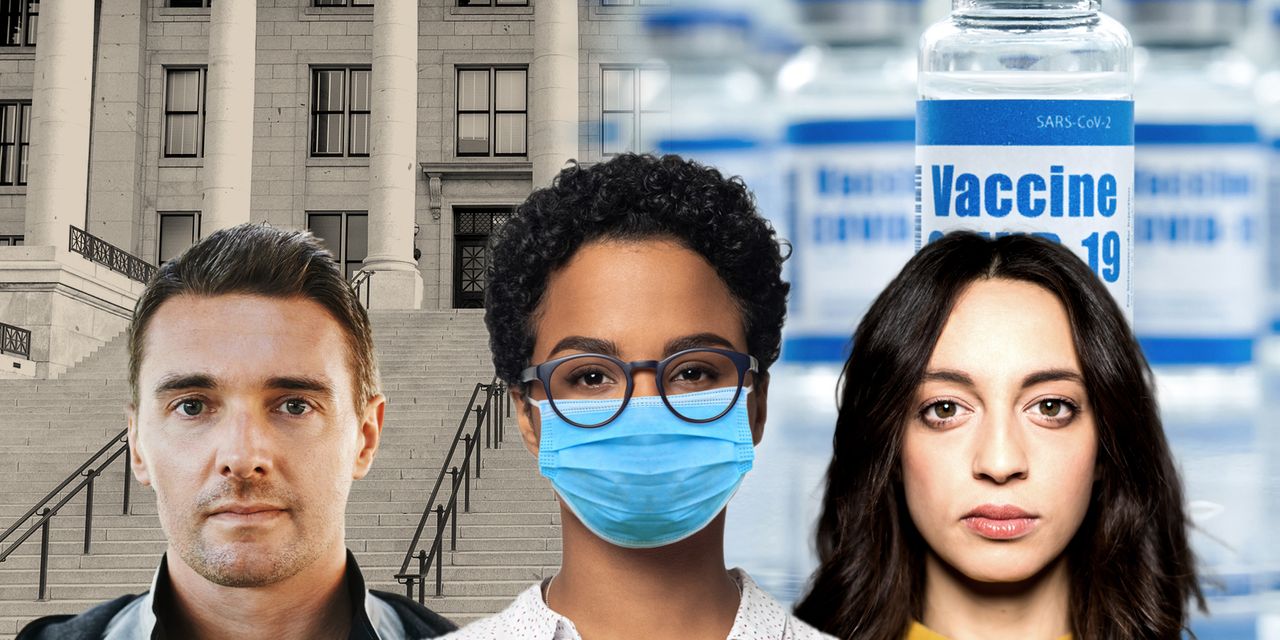 Christopher Neve had a spotless record and several pay raises in his six years as a deputy sheriff with the Durham County Sheriff’s Office.

In March, he was put on leave without pay for insubordination and then terminated, court and personnel records show.

This happened because Neve, 33, refused to get vaccinated, according to his North Carolina federal lawsuit filed in April.

“ Christopher Neve, as a deputy sheriff with the Durham County Sheriff’s Office, could take the vaccine against his will or risk job loss, potential career consequences, a federal lawsuit alleges. ”

Months earlier, Durham County’s Sheriff Clarence Birkhead sent a staff memo, the lawsuit said. “Getting vaccinated now will help protect you and the public we serve …I am requiring all employees to be vaccinated. It is mandatory,” an excerpt from the memo said.

That put Neve in an impossible situation, his attorneys alleged. He could either take the vaccine against his will or risk job loss, potential career consequences “and having his life upended.”

Neve “stood by his informed medical decision to not take an experimental product and, as a result, was illegally fired,” the lawsuit alleged.

The day he was put on leave, Neve had to turn over his badge and gun, and “humiliated” with an escort out of the office, the lawsuit said.

Neve wants his job back and a court order blocking the office from carrying out its staff vaccination policies.

Neve’s lawyers did not respond to requests for comment. The Durham County Sheriff’s office declined to comment on pending litigation, a spokeswoman said. More than 76% of the office staff has had at least one shot or is completely vaccinated, she noted.

Paid time off, free rides and straight-up cash are some of the ways employers are trying to entice their staff into getting their COVID-19 vaccine shots.

Months after federal workplace regulators indicated employers can mandate vaccination, a small group of worker lawsuits are putting that view to the test.

This North Carolina ex-deputy sheriff is joined by former New Mexico detention center staff and several Los Angeles public school teachers and staff who all say they can’t be forced into vaccination, according to case files reviewed by MarketWatch.

“ This North Carolina ex-deputy sheriff is joined by former New Mexico detention center officers and Los Angeles public school teachers and staff who all say they can’t be forced into vaccination. ”

Some are suing to get their job back, but all these cases want judges to block employers from making vaccination requirements.

They point to a federal statute that, they say, makes it clear they have the choice to accept or refuse vaccinations that are rolled out on an emergency basis. And they can’t be punished for their choice, they allege.

The Food and Drug Administration granted emergency use authorization for the Pfizer PFE-BioNTech BNTX vaccine, the Moderna MRNA vaccine and the Johnson & Johnson JNJ vaccine.

While none of the vaccines currently have full FDA approval, the agency says the vaccines meet safety and efficacy standards — a point that doesn’t convince the suing workers.

As of Wednesday, 56.4% of America’s adult population has received at least one shot and 40.8% are fully vaccinated, according to the Centers for Disease Control and Prevention.

The cases come at a time of rising vaccination rates and rising employer expectations their staff will be inoculated and ready to return to the office.

While litigation is just starting in Neve’s case, an early test is approaching in a different lawsuit. Los Angeles public school teachers and staff are pressing for an injunction that would block the school system from ever requiring vaccination.

There’s a May 17 court date on the motion in the pending Central District of California case.

The school system is not mandating vaccination, a spokeswoman for the Los Angeles Unified School District told MarketWatch. “Instead, we are providing access to the vaccine for all who work in schools and encouraging them to get vaccinated. The choice is theirs,” she said.

“ ‘The communities we serve are among the hardest-hit in the nation by the virus and many staff members have told us they fear they might contract the virus and become ill or bring it home to a household member.’ ”

“The communities we serve are among the hardest-hit in the nation by the virus and many staff members have told us they fear they might contract the virus and become ill or bring it home to a household member,” she said. “Providing all employees access to the vaccine is helping us reopen schools as soon as possible and in the safest way possible.”

The school system has moved to dismiss the case. Lawyers for the teachers and staff allege in court papers that the vaccination policy was changed a day after they filed suit.

In New Mexico’s Doña Ana County, Nelson Goodin, the County Attorney, told MarketWatch “we mandated the vaccine because we thought it was necessary to protect employees and the public.”

The mandate applies to firefighters, deputy sheriffs and detention center staff, he said. Except for a handful of accommodations on health and religious reasons, those three categories of workers are vaccinated, according to Goodin.

Two former detention-center staffers are suing the county. Former employee Anthony Zoccoli alleges he was wrongly fired for refusing the vaccine while ex-officer Isaac Legaretta said he had to quit because the job environment became hostile, including a reassignment that allegedly broke administrative rules.

Goodin defended county policies, saying officials had to provide safe workplaces. When it comes to the county jail, workers are dealing “people that don’t get to decide they can go home and stay away from everybody else,” he noted.

But Jonathan Diener, the lawyer for the former detention center employees, said “It is not a mandatable vaccine until it is approved.”

Some 88% of employers say they’re planning to either demand or encourage staff to be vaccinated against COVID-19, according to an Arizona State University and Rockefeller Foundation survey of more than 1,300 employers.

Six in ten employers said they’d be asking for proof of vaccination from staff, the late April survey said.

One month earlier, 91% of CEOs heading large companies said their companies would be asking staff to keep them informed when they were vaccinated.

“ Jonathan Diener, an attorney for the two former New Mexico detention center staffers says it’s a fight over a person’s capacity to make their own health decisions, which he says are more fundamental than First Amendment rights. ”

Vaccination rates are climbing without widespread worker vaccination mandates, said professor Dorit Rubinstein Reiss, who teaches at The University of California Hastings College of the Law. Still, there’s a lot riding on how these cases turn out, she said.

If the judges say employers cannot require vaccination, that not only complicates employers’ vaccination efforts, “it may mean outbreaks in high risk situations that could be avoided,” Reiss added.

And it’s not just about on-the-job policies, she noted. Some college campuses are requiring vaccination for on-campus schooling and rulings against employers “would be a dilemma for them.”

Reiss has previously written that “while there is still legal uncertainty,” her view is the “the balance of factors supports the ability of employers (or states) to require EUA vaccines.”

Diener, an attorney for the two former New Mexico detention center staffers, sees the stakes differently: It’s a fight over a person’s capacity to make their own health decisions, which he says are more fundamental than First Amendment rights.

So does the stick behind the carrot of vaccination incentives have the full force of law?

The Equal Employment Opportunity Commission has said employers can require vaccination, in the view of lawyers and professors. (The EEOC lays out a process to try accommodating a worker who refuses the vaccine on health or religious grounds.)

The EEOC guidance is “is not clearly worded,” said Fazal Khan, a doctor and public health law professor at the University of Georgia. But, in his view, it does represent “the current thinking of the federal government.”

“ The statute requires the public be informed ‘of the option to accept or refuse administration of the product.’ But there is critical disagreement over whether this refers to just medical consequences or professional consequences. ”

These lawsuits, however, focus on a different part of federal law surrounding emergency use authorization.

The statute requires the public be informed “of the option to accept or refuse administration of the product” and that undercuts employer directives, the lawsuits say. Among other things, the cases note, FDA fact sheets for all three vaccines emphasize the recipient’s right to choose or refuse.

Here’s another wrinkle: The same statute also says potential recipients need to be told “of the consequences, if any, of refusing administration of the product.”

“A consequence is, you might be fired,” Khan said. He said he believes the cases face an uphill battle.

Reiss agrees the cases are a long shot, but says the workers are trying to pin their employment allegations on a statute that isn’t even talking about how employers need to treat workers.

“The way we read that,” said Goodin, the Doña Ana County Attorney, is that “[employees] have to be advised of the consequences if they refuse to take it.”

The clash underscores the need for a judicial interpretation. “That,” Diener said, “is the whole point of this case.”

Back in North Carolina, Neve’s case shines another light on the pandemic’s complex human toll. Neve has been “consumed” with thoughts on what his next job move is”especially given the current state of the workforce and economy,” his lawsuit said.

Neve, the filing added, “has feelings of despair that all his work and efforts to maintain a perfect record and good reputation among his supervisors, colleagues, and residents of the community had been ruined by the illegal mandate.”

What Does This Recent Milestone for Canadian Pot Companies Mean for Investors?

What’s Worth Streaming: Here’s everything coming to Netflix in June 2020 — and what’s leaving