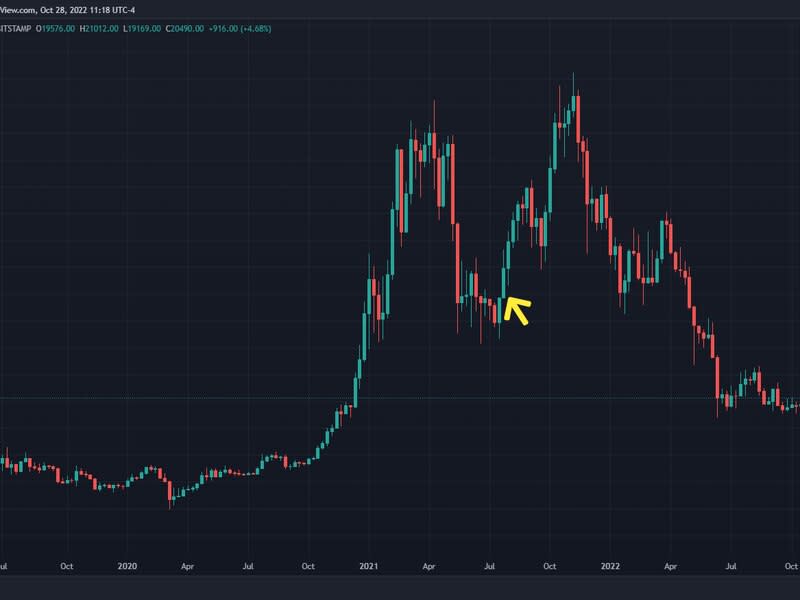 While a repeat of the super-rally seen in the second half of 2021 might not be likely, that era did come to mind last week as bitcoin showed strength. Crypto Long & Short is CoinDesk's weekly newsletter featuring insights, news and analysis for the professional investor. Read More...

Sometime in the (Eastern time zone) evening on July 25, 2021, was the start of a magical run for bitcoin, punctuated by a late night 5% jump (noted by the yellow arrow in chart below). Bitcoin was in the mid-$30,000s range at the time, but by November it had reached an all-time high of around $68,000.

You’re reading Crypto Long & Short, our weekly newsletter featuring insights, news and analysis for the professional investor. Sign up here to get it in your inbox every Sunday.

Granted, this move wasn’t as big as the July 2021 one, but it raised eyebrows nonetheless (astute readers will see another such candle on the morning of October 26). I’m also not implying that past performance is indicative of future results, so characterizing this one hour of price movement as the start of another run up to all-time highs would be premature (though history tends to rhyme).

But let’s face it, the bitcoin market has been pretty boring and last week was anything but. Not just because of the move up, but also because it happened in spite of last week’s dismal performance of big technology stocks.

Bitcoin’s price could be up for any number of reasons, but here are two key things that happened on Wednesday. The Bank of Canada surprised financial markets by raising interest rates by only 50 basis points instead of 75 basis points. And the U.S. Census Bureau also reported a 10.9% decline in new home sales in September around the same time.

Both feed into the same idea: Central banks might slow rate increases because the economy is cooling enough to tame inflation. Policy makers in Canada raised by less than expected. Meanwhile, U.S. inflation has been fueled, in part, by a hot housing market. Maybe that drop in home sales will start moving the U.S. Federal Reserve toward slowing its own rate increases? We’ll find out what the Fed has in mind during next week’s Federal Open Market Committee meeting.

Meanwhile, in the stock market …

While bitcoin and crypto soared, most of Big Tech had a bad week. Last week, Alphabet (GOOGL), Amazon (AMZN), Apple (AAPL), Meta Platforms (META) and Microsoft (MFST) reported quarterly earnings. Each of these companies, except Apple, straight up had a bad time.

I’ve written about bitcoin and the stock market decoupling before. So if you, like me, believe bitcoin has potential as a new macro asset with some level of uncorrelatedness to traditional macro assets, it is nice to see bitcoin breaking its widely written-about correlation to tech stocks for at least one week. Of course, one week doesn’t mean that the correlation is gone, but it does put a dent in both the statistical reality and the narrative.

Here are my two takeaways from this past week:

First, the stocks that performed poorly were suffering from a bad earnings week. Meta decimated its free cash flow chasing the metaverse, Alphabet’s Google online advertising revenue was weak, Microsoft is down even though it beat top-line revenue and earnings expectations because cloud revenue missed and guidance was weak, and Amazon came up short last quarter and also shared that the holiday season wouldn’t be as busy as expected.

Bitcoin and (most of) crypto don’t have earnings announcements, which is playing to its favor here. Noelle Acheson, who writes the Crypto Is Macro Now blog (and used to write this newsletter), put it well:

“An important feature of BTC and [ether] is that neither are ‘burdened’ with the risk of disappointing holders with lower-than-expected earnings per token.”

Exactly. Maybe there is something to be said for more frequent earnings reporting from public companies in the name of smoothing out aggressive price movements. Pump out earnings data every 10 minutes? (It’s actually a terrible idea, in my opinion, but there are some who want more real-time info.)

Second, it is interesting to see stocks, particularly Meta and Amazon, trade like the cryptocurrencies that Securities and Exchange Commission Chair Gary Gensler is hyperfocused on protecting consumers from. You know, the ones that go to zero in a blink of an eye? Interesting is not really the right word. It’s concerning.

What is interesting about these stocks falling apart is that bitcoin looks stable by comparison. That’s also true if you zoom out a little more and look at the past month: Meta is down 23.5%, Amazon is down 13.3% yet bitcoin is up 6.8%.

That sentence was insane to write, so here it is again differently: Bitcoin looks stable in comparison with corporate superstars Meta and Amazon.