(Bloomberg) -- Kuaishou Technology slid as much as 11% after revealing a drop in livestreaming revenue in its first results report since a $5.4 billion initial public offering, spurring concerns of heightened competition at home.The TikTok-like video service reported a 7.3% slide in December quarter sales from a division that competes with the likes of Joyy Inc. and Bilibili Inc., while overall revenue grew more than 50%. Kuaishou, which in February pulled off the biggest technology IPO since Uber Technologies Inc.’s, reported a 50% climb in 2020 revenue to 58.8 billion yuan ($9 billion), barely beating analysts’ lofty projections. Its shares fell to HK$271.40 on Wednesday, still more than double its IPO price.Kuaishou, the nine-year-old operator of China’s most popular short-video service after ByteDance Ltd.’s Douyin, is trying to establish its place among a generation of mega-startups like food delivery giant Meituan and ride-hailing leader Didi Chuxing. Backed by Tencent Holdings Ltd., the startup’s February coming-out party in Hong Kong was the second-best debut ever for an IPO that raised more than $1 billion.But the company, which is expanding beyond its roots in short videos, is grappling with an influx of competitors keen to tap the world’s largest and fastest-growing livestreaming arena. Apart from direct rivals such as Joyy, it also has to contend with game-streaming services like Huya Inc. and e-commerce giants such as Alibaba Group Holding Ltd. that are using the format increasingly to target consumers. Average users on both a daily and monthly basis slipped in the December quarter from the previous three months.Kuaishou is doing better in its other businesses, doubling online advertising in the December quarter and growing e-commerce several-fold from a low base. It posted a net loss for the three months of 19.3 billion yuan -- exceeding revenues in part because of fair value changes in preferred shares -- versus 18 billion yuan a year earlier.“While we want to expand our advertising revenue, we definitely have to maintain and also make sure we can deliver very excellent user experience,” Kuaishou Chief Executive Officer Su Hua told analysts on Tuesday. “So, in other words, we will not just blindly go for a sharp increase in advertising revenue in compromise of user experience.”The social media giant is counting on new ventures such as retail to help sustain its pace of growth over the longer term, despite competition from ByteDance and others exploring social commerce. Founded by former Google employee Su Hua and Cheng Yixiao as an app built around sharing animated GIF images, Kuaishou pivoted to short video in 2013 and added livestreaming in 2016, landing footholds in what eventually became two of the hottest social media formats.Read more: Kuaishou Surges 161% In Biggest Technology IPO Since UberFor more articles like this, please visit us at bloomberg.comSubscribe now to stay ahead with the most trusted business news source.©2021 Bloomberg L.P. Read More... 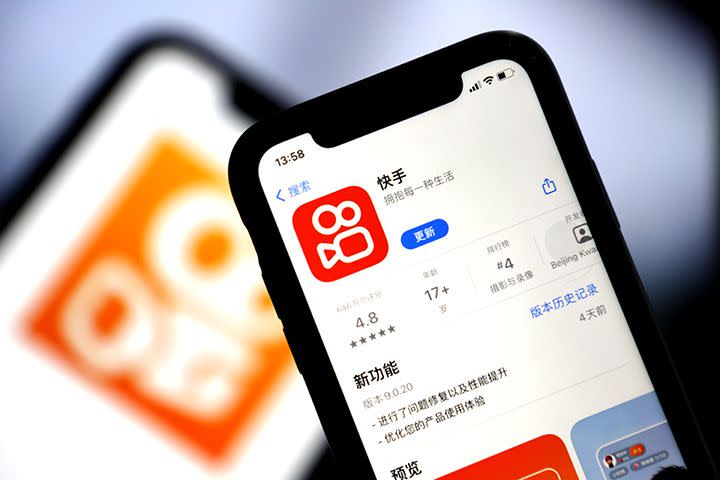 Dow Jones Futures: Intel Lifts Chips After Market Retreat Slams Leaders; GME Stock Falls On Earnings
The Moneyist: My husband and his ex-wife agreed that he could claim their kids on his taxes, but now she’s ‘demanding’ half their stimulus
Comment

The Fed: Fed should refuse to ‘play along’ with Trump’s trade war: William Dudley