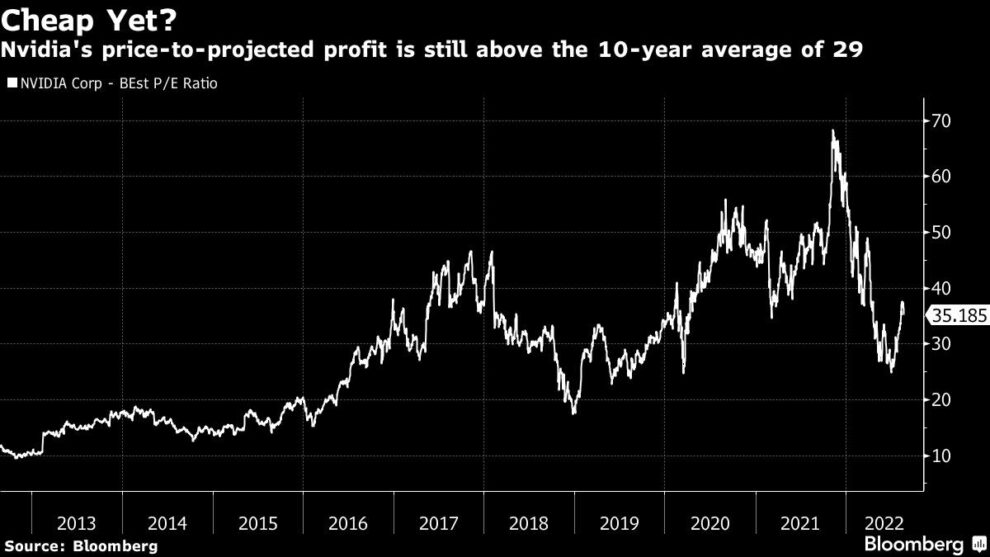 (Bloomberg) -- Nvidia Corp. is one of the worst-performing semiconductor stocks this year, though the shares are hardly in the bargain basement bin.Most Read from BloombergSaudi Prince Says Oil’s Disconnect May Force OPEC+ ActionApple’s New iPhone 14 to Show India Closing Tech Gap With ChinaHome Sellers Are Slashing Prices in Pandemic BoomtownsCovid Incubation Gets Shorter With Each New Variant, Study ShowsStocks Knocked Down as Torrid Rally Hits a Wall: Markets WrapAfter a 42% drop, and a more Read More... 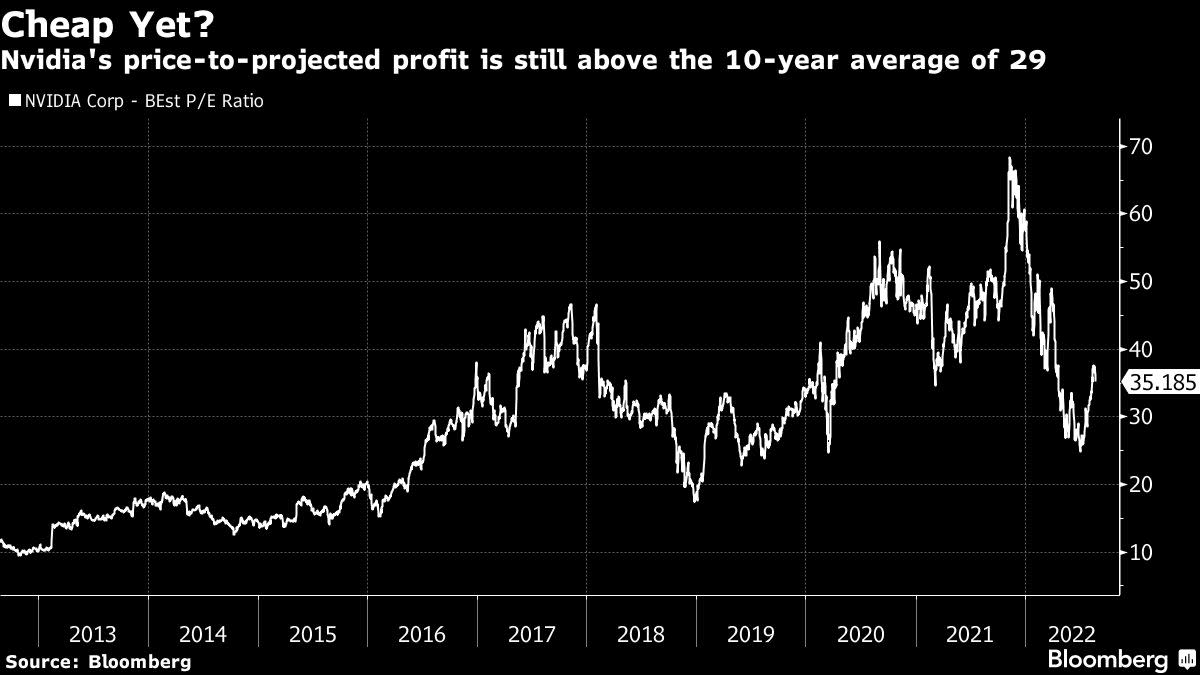 (Bloomberg) — Nvidia Corp. is one of the worst-performing semiconductor stocks this year, though the shares are hardly in the bargain basement bin.

After a 42% drop, and a more than $300 billion loss in market value, the maker of graphics processors is much cheaper than in the heady days of 2021 when its market capitalization was creeping toward $1 trillion. Yet it’s still priced at 35 times projected earnings, rich both historically and compared with peers, especially at a time when revenue growth is expected to slow.

Nvidia’s plight is familiar to investors who have watched stocks with nose-bleed valuations plummet this year under pressure from rising interest rates and concerns about weakening economic growth. Recently, however, the firm has joined the ranks of chipmakers that have warned of slowing demand, putting the emphasis on forecasts when it reports second-quarter results on Wednesday afternoon.

“Nvidia is doing a lot of exciting things and fundamentally we can’t turn our back on them, but obviously we’d love to get some indication of how long this lull is going to last,” said Daniel Morgan, senior portfolio manager at Synovus Trust. “That’s when you can take a look at the stock and say 35 times earnings is a great buy.”

The stock’s multiple compares with an average over the past decade of 29 times. It’s also in stark contrast to fellow chipmakers like Micron Technology Inc., Qualcomm Inc. and Microchip Technology Inc. that trade at around 12 times forward earnings. The Philadelphia Stock Exchange Semiconductor Index trades at nearly 16 times.

Earlier this month, Nvidia gave preliminary second-quarter results that showed revenue missing the company’s previous projection by more than $1 billion. Management blamed a drop in demand for its gaming chips, but also acknowledged a shortfall in its data center business. Revenue growth is projected to slow to just 13% in the current fiscal year.

“We still see outstanding queries about forward demand,” said Wedbush analyst Matt Bryson, who has a neutral rating on the stock. “We are reluctant to get more constructive on the stock until we have more near-term visibility even if we remain positive on NVDA’s longer-term trajectory,” he wrote in a note.

Retail traders seem less reticent. The week of Nvidia’s Aug. 8 warning, the stock was the most popular among mom-and-pop investors, according to Vanda Research. Last week, Nvidia was the sixth-most purchased stock with the retail crowd pouring in more than $150 million.

The Nasdaq 100 Index, which had jumped as much as 23% from its June 16 low, has fallen in four of the last five sessions. The tech-heavy gauge closed down 2.7% on Monday, its biggest drop since June 28, as the summer rally in technology stocks cools.