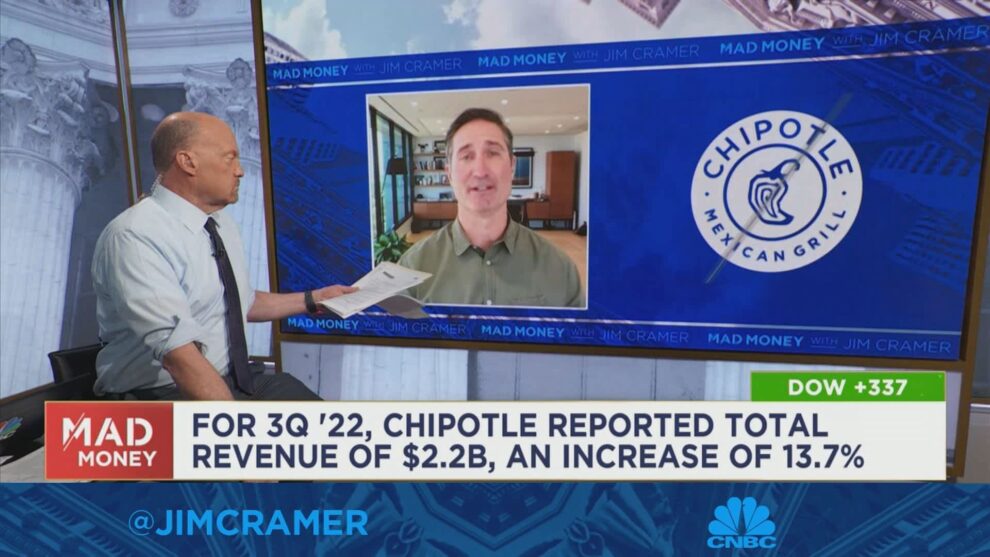 Chipotle Mexican Grill on Tuesday reported quarterly earnings that topped analysts’ expectations on the strength of its latest round of menu price hikes.

CEO Brian Niccol said the company saw “minimal resistance” to higher menu prices during the quarter, although transactions declined 1%. Even with the price hikes, he noted the average price for a chicken burrito bowl, which accounts for about half of U.S. orders, is still under $9.

Net sales rose 13.7% to $2.22 billion from the year-earlier period, fueled by same-store sales growth of 7.6% and new store openings. Analysts surveyed by StreetAccount were projecting a same-store sales increase of 7.3%.

Like other restaurant companies, Chipotle has been raising menu prices as it pays more for ingredients. The chain has said that lower-income consumers have been visiting less frequently, but that most of its customer base is in a higher-income bracket. That trend accelerated this quarter, denting the company’s traffic.

“We are seeing transactions be pushed in that negative range and obviously will continue to keep an eye on it as we go forward,” Niccol told analysts on the company’s conference call on Tuesday.

He added, however, that diners aren’t opting out of paying extra for guacamole or trading down from steak to chicken.

Chipotle hiked prices in August for the third time in 15 months, bringing them up 13% from the third quarter of 2021. Earlier in October, it raised prices for a fourth time in about 700 locations, representing more than a fifth of its footprint. Executives said the latest round was due to pockets of wage inflation in certain markets.

For the period ended Sept. 30, in-restaurant sales climbed 22.1%, signaling that customers are returning to Chipotle locations to order their burritos and tacos.

That trend has continued to hurt digital sales, which accounted for just 37.2% of revenue. But Chipotle’s profit has benefited from the reduced number of delivery orders, for which the company pays fees to third parties.

The burrito chain reported third-quarter net income of $257.1 million, or $9.20 per share, up from $204.4 million, or $7.18 per share, a year earlier. The company reported paying more for dairy, tortillas, avocados, packaging and labor.

Excluding $3.5 million in separation costs tied to the departure of an employee, corporate restructuring and other items, Chipotle earned $9.51 per share.

Shares of Chipotle were off more than 2% in extended trading Tuesday.

The chain opened 43 new locations during the quarter and all but five included a “Chipotlane,” drive-thru lanes reserved for digital-order pickup.

Chipotle’s board approved an additional $200 million to buy back its shares in the period.

For the fourth quarter, Chipotle is predicting same-store sales growth in the mid- to high single digits. By the end of the year, it’s forecasting it will open between 235 to 250 new restaurants. For 2023, the company is projecting 255 to 285 openings.