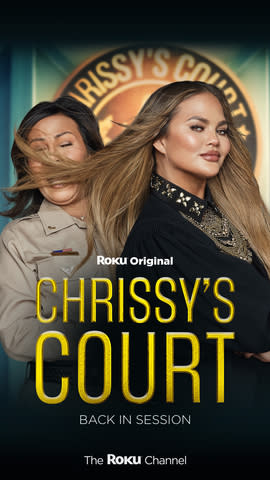 Courtroom series led by Chrissy Teigen and Pepper Thai drew more unique views than any prior unscripted Roku Original launch during its opening weekend on The Roku Channel in the U.S.

“Chrissy’s Court” will be back in session for its third season on Friday, October 21, 2022

SAN JOSE, Calif., June 23, 2022–(BUSINESS WIRE)–Roku, Inc. (NASDAQ: ROKU) today announced that the second season of “Chrissy’s Court,” starring Chrissy Teigen and Pepper Thai, smashed U.S. viewership records for unscripted Roku Originals programming during its opening weekend on The Roku Channel. Season 2 of “Chrissy’s Court” drew more unique views* during its opening weekend than any prior unscripted Roku Originals series launch, making the series the #1 unscripted Roku Original premiere of all time. The series also soared to the top of all video-on-demand programming on The Roku Channel, earning the spot of #1 video-on-demand program on The Roku Channel in the U.S. by unique views during its opening weekend. The season 2 premiere of Chrissy’s Court also delivered more than 4x the audience of the season 1 premiere. In addition to the strong opening weekend results, Roku also announced that the popular series will exclusively return to The Roku Channel for a third season on Friday, October 21, 2022.

Brian Tannenbaum, Head of Alternative Originals, Roku: “We are thrilled with the record-breaking performance of ‘Chrissy’s Court,’ and we look forward to an entire new season of Chrissy’s wit and charm as she presides over the courtroom. It’s incredible to see Roku Originals continue to resonate with our streamers in such a profound way with standout unscripted programming on The Roku Channel.”

Chrissy Teigen, Executive Producer & “Judge”: “We’ll be back for more! The cases in season 3 of ‘Chrissy’s Court’ are wilder, the people are more fun than ever, and no claim is too petty for my courtroom. Mom and I can’t wait to bring the all-new season to audiences this October exclusively on The Roku Channel.”

“Chrissy’s Court” features Chrissy Teigen reigning supreme as the “judge” over one small claims case. The plaintiffs, defendants, and disputes are real, as Chrissy’s mom turned “bailiff,” Pepper Thai, maintains order in the courtroom. In this courtroom, Chrissy’s decisions are final and binding.

Season 2 of “Chrissy’s Court” premiered exclusively on The Roku Channel on Friday, June 17, 2022.

*A “unique view” is streaming by a distinct account for any period of time.

This press release contains “forward-looking” statements that are based on our beliefs and assumptions and on information currently available to us on the date of this press release. Forward-looking statements may involve known and unknown risks, uncertainties and other factors that may cause our actual results, performance or achievements to be materially different from those expressed or implied by the forward-looking statements. These statements include but are not limited to the content, benefits, timing and availability of Chrissy’s Court and other Roku Originals on The Roku Channel; trends related to TV streaming; and the features, benefits, growth and reach of The Roku Channel and the Roku platform. Except as required by law, we assume no obligation to update these forward-looking statements publicly, or to update the reasons actual results could differ materially from those anticipated in the forward-looking statements, even if new information becomes available in the future. Important factors that could cause our actual results to differ materially are detailed from time to time in the reports Roku, Inc. files with the Securities and Exchange Commission, including our Annual Report on Form 10-K for the year ended December 31, 2021 and our Quarterly Report on Form 10-Q for the quarter ended March 31, 2021. Copies of reports filed with the SEC are posted on Roku’s website and are available from Roku without charge.

Roku is a registered trademark of Roku, Inc. in the U.S. and in other countries. Trade names, trademarks and service marks of other companies appearing in this press release are the property of their respective holders.