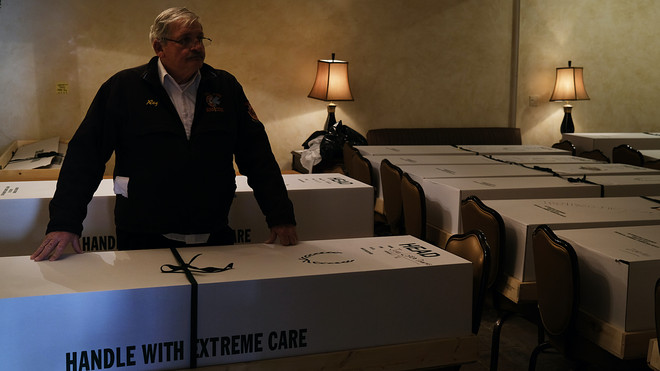 Elmhurst, Queens, is one of the areas of the city hit hardest by the coronavirus. Read More...

Neighborhoods in southeast Queens as well as Brooklyn have the highest death rates from COVID-19 in the city, according to data New York City’s health department made public for the first time on Monday afternoon.

The deaths by ZIP Code offer a new window into how the coronavirus has ripped through pockets of density and poverty, leaving a single community to mourn hundreds of deaths. The granular death counts also reinforce a clear pattern of severe disease clustered around the city’s public housing projects.

For instance, Canarsie-Flatlands in Brooklyn, home to four New York City Housing Authority developments, has the highest death rate in the city by population. The worst-hit ZIP Code in the neighborhood has recorded 612 deaths per 100,000 residents—more than triple the city average and the highest rate in the city.

“We are at this point trying to make sure there’s transparency, obviously, even including about painful things,” Mayor Bill de Blasio said at a Monday briefing, referring to the latest data ahead of its release.

A ZIP Code encompassing Far Rockaway in Queens had the second-highest death rate in the city, with 445 deaths per 100,000 residents, more than double the city average. It, too, encompasses a disproportionate amount of public housing relative to the city, with more than a half-dozen projects spread across it and its neighboring ZIP Code on the eastern end of the Rockaways.

The virus has devastated other areas at the intersection of dense housing and poverty, including neighborhoods in northeast Bronx, western Queens and East Harlem, which all averaged more than 260 deaths per 100,000 residents across their respective ZIP Codes. For perspective, the citywide death rate stood at about 190 deaths per 100,000 people as of Monday.

The fate of New York’s worst-hit ZIP Codes looks even grimmer when put into a national perspective, where the disease has killed about 27 in 100,000 people.

As of Monday, the total number of diagnosed cases approached 200,000 across the five boroughs; while nearly 16,000 people have died (that number rises to more than 20,000 if “probable” COVID-related deaths are included).

Officials did not directly address the findings of the fatality data on Monday, but have homed in on public housing projects for weeks. The city has set up a number of community-based testing sites around New York City Housing Authority (NYCHA) developments, upped its outreach to vulnerable populations and said last week it would distribute 22,000 air conditioners to residents living in public housing, particularly seniors, amid the pandemic.

On the flip side, there are affluent neighborhoods, particularly in Manhattan, with very few deaths. Lower Manhattan, which includes Wall Street and the trendy Tribeca neighborhood, has two ZIP Codes where not a single resident had died as of Monday.

SoHo and Greenwich Village, combined as one neighborhood by the health department, has suffered an average death rate of 55 per 100,000 residents across its ZIP Codes, about one-fourth of the city’s average death rate.

On average, deaths are half the city rate in the ZIP Codes that make up Gramercy Park-Murray Hill, Chelsea-Midtown and the Upper West Side, respectively—all well-to-do parts of the city, where many residents who can have fled to other parts of the state or country.

Unsurprisingly, there were fewer fatalities in the wealthier parts of the outer boroughs as well. In Brooklyn, Park Slope and Greenpoint—both transformed by waves of wealthy families and young people in recent years—have death rates at a fraction of the city average. Same goes for Bayside-Little Neck, a section of affluent northeast Queens.

As the city sets its sights on the first phase of reopening, the new data provides a fresh, albeit grim, reminder of the toll the disease has already had on the city.

“We’re not opening up the floodgates at once. We’ve seen other places do that and they paid dearly for it,” de Blasio said at Monday’s briefing, adding that current stay-at-home measures would stay in place until at least the first half of June.

“First half of June is the first opportunity to relax anything,” de Blasio said at his morning briefing.

The state and city have devised a total of 10 health metrics measuring the spread and containment of COVID-19, such as healthcare capacity, daily deaths, hospitalizations and tracing capacity, all of which the city must meet before it can begin to reopen. The city is technically still under a state-imposed stay-at-home order until Thursday, May 28, but the mayor’s comments on Monday indicate the five boroughs will remain closed beyond that expiration date.

“There’s no way we’re getting to the city and state indicators before June at this rate,” de Blasio said.

One metric imposed by the state is to have 30 contact tracers, vital to containing and tracking future outbreaks, per 100,000 residents. De Blasio said he expects to have that army of tracers hired and trained by the beginning of June.

Read more: Updates about New York City, the epicenter of the coronavirus pandemic in the U.S.

The city is also on track to free up enough hospital capacity to meet two more state metrics, which require 30% open intensive-care and hospital beds, by the first part of June, de Blasio said.

“We’re not going to have a perfectly straight line,” he added, “that would be kind of superhuman. But we cannot have a boomerang. We cannot have something where we have to shut down again.”

• Two more regions of the state will reopen this week: Western New York, which encompasses Buffalo, and the Albany Capital District, according to Gov. Andrew Cuomo.

• The governor said at his daily briefing Monday that the state would work with major sports franchises to reopen, including preseason training camps and eventually televised games without fans. “Anyway we can help, we would help,” Cuomo said. “Why wait until you can fill a stadium?”

• The latest data on hospitalizations continues to show gradual progress in stifling the virus, statewide; 106 people died across New York state on Sunday, eight times fewer daily deaths than at the apex of the crisis in early April.

Antitrust Bills Have Some Democrats Asking Pelosi to Slow Down

BookWatch: What investors should do if they think the stock market is in a bubble, according to the folks who wrote the book on bubbles