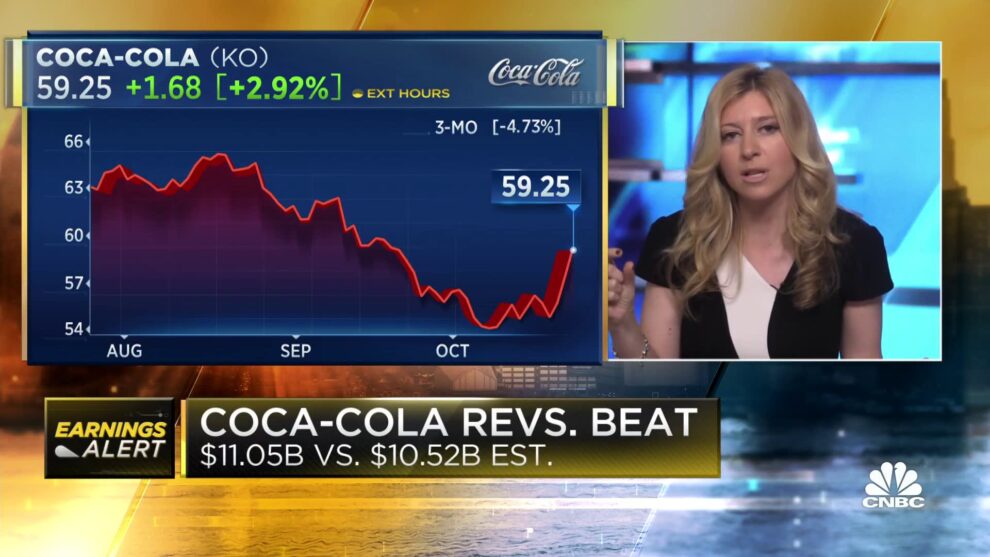 Shares of Coke have fallen about 3% this year, bringing its market value down to $247.6 billion. Read more...

Coca-Cola on Tuesday raised its full-year outlook after beating Wall Street’s expectations for its quarterly earnings and revenue.

The company also provided a look toward 2023, saying that it expects inflation to keep raising its expenses and commodity prices to stay volatile. Foreign currency is also projected to weigh on Coke’s earnings and revenue. However, the company won’t provide its full outlook for next year until early 2023.

Shares of the company rose 3% in premarket trading.

Unit case volume, which strips out the impact of currency and price changes, grew 4% in the quarter. Other consumer giants, like Tide maker Procter & Gamble, have seen their volume fall as consumers feel inflation hit their wallets. Coke said it’s been trying to appeal to budget-conscious consumers through product offerings like value packs in North America.

Coke’s sparkling soft drinks segment, which includes its namesake soda, reported volume growth of 3%. Coke Zero Sugar was once again a standout, with its volume rising 11% in the quarter.

The company’s hydration, sports, coffee and tea division saw volume growth of 5%, fueled by Powerade, Bodyarmor and the expansion of Costa Coffee.

Coke’s nutrition, juice, dairy and plant-based beverages division reported flat volume for the quarter. Coke said the lackluster performance was due to declining demand for local brands in Eastern Europe.