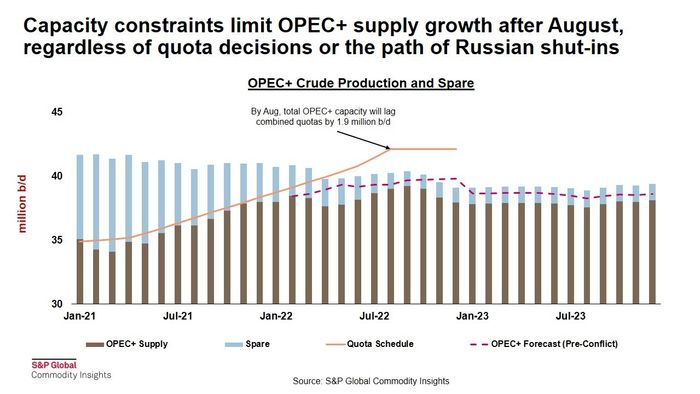 President Joe Biden is headed to the Middle East this week and the pressure in on for the U.S. to look to Saudi Arabia, the world’s largest oil exporter, for more barrels of oil. Limits to global production capacity, however, are likely to be a difficult obstacle to overcome, analysts say. Read More...

President Joe Biden is headed to the Middle East this week and the pressure is on for the U.S. to look to Saudi Arabia, the world’s largest oil exporter, for more barrels of oil.

Limits to oil production capacity, however, are likely to be a difficult obstacle to overcome, analysts said.

Biden plans to visit the Middle East region from July 13 to July 16, with stops in Israel, the West Bank, and Saudi Arabia. The meetings with key leaders in the region include Saudi Arabia’s King Salman and Crown Prince Mohammed bin Salman, the kingdom’s de facto ruler.

Biden will not only be seeking additional barrels, but also a “redirection of exports to Europe to backfill” a potential loss of 2 million barrels a day of oil from Russia, with the “most serious energy sanctions set to take effect in several months’ time,” analysts at RBC Capital Markets, led by Helima Croft, head of global commodity strategy, wrote in a note dated Sunday.

They said Saudi Arabia will likely agree to “loosen the oil taps on the back of the Biden visit, but the leadership will still probably strive to find a way to do it within the context of the current OPEC+ agreement that extends through December.”

“One possible avenue would be for the few countries with any remaining spare capacity (ie. Saudi Arabia and U.A.E.) to compensate for the production underperformance of the struggling OPEC states such as Nigeria and Angola,” the RBC analysts wrote.

The timing of Biden’s trip is particularly crucial, as prices for oil hover above $100 a barrel and gasoline prices at the pump hold near record highs.

The planned meetings have drawn sharp criticism from human-rights activists and others. Four Democratic senators last month urged Biden in a letter to put discussion of human-rights abuses at the center of any talks with the crown prince.

Biden, in his 2020 presidential campaign, had vowed to treat Saudi Arabia like a pariah. In February 2021, the White House cleared the release of an intelligence report that determined that the crown prince had ordered the operation that led to the death of journalist Jamal Khashoggi in 2018.

Biden, in a guest opinion piece in the Washington Post over the weekend, argued that engaging directly with countries like Saudi Arabia could help counter Russian aggression and competition from China. The president said he aimed to strengthen a U.S.-Saudi partnership “going forward that’s based on mutual interests and responsibilities, while also holding true to fundamental American values.”

Retail gasoline prices, meanwhile, averaged $4.657 a gallon on Monday, down less than 38 cents from the record $5.034 reached on June 16, according to GasBuddy data.

Analysts don’t expect Biden’s trip to result in any earth-shattering news for the oil market. Discussions in Saudi Arabia are expected to include means to ensure global energy, a senior administration official told the press during a briefing in June after the trip was announced.

Energy expert Daniel Yergin wrote in his Project Syndicate column that he believes the Saudis may step up oil production to help stabilize oil markets “in connection with” Biden’s visit.

Yergin, author of The New Map: Energy, Climate, and the Clash of Nations and vice chairman of IHS Markit, also pointed out that “there does not appear to be a large amount of extra oil in Saudi Arabia (or in the United Arab Emirates) that can be produced on short notice.”

He also said and other oil-exporting nations can’t return to their previous levels of production because of a lack of investment and maintenance since the pandemic.

Global oil supplies have tightened amid a post-COVID-19 recovery in energy demand.

The International Energy Agency warned in a June report that global oil supply may struggle to keep pace with demand next year, as “tighter sanctions force Russia to shut in more wells and a number of producers bump up against capacity constraints.”

At the last meeting on June 30, OPEC+ — members of the Organization of the Petroleum Exporting Countries and their allies — confirmed plans to raise monthly overall production by 648,000 barrels a day in August to unwind output cuts put in place after the onset of the COVID-19 pandemic.

“The most important thing to emphasize is that Saudi Arabia and OPEC+ have very limited spare capacity, and they have to manage it carefully,” said Ben Cahill, senior fellow for the Energy Security and Climate Change Program at the Center for Strategic and International Studies, during a July 7 CSIS press briefing previewing Biden’s Middle East trip. “Producing more [oil] could fail to bring prices down, and it could also spook the market if [spare] capacity dwindles.”

To keep the implied global supply and demand balance from tipping into deficit in 2023, the IEA said OPEC+ would have to further tap into its dwindling capacity cushion, reducing it to “historic lows” of just 1.5 million barrels a day.

Cahill expects Biden’s tip to Saudi Arabia will be “constructive,” but does not expect any dramatic announcements on oil policy.