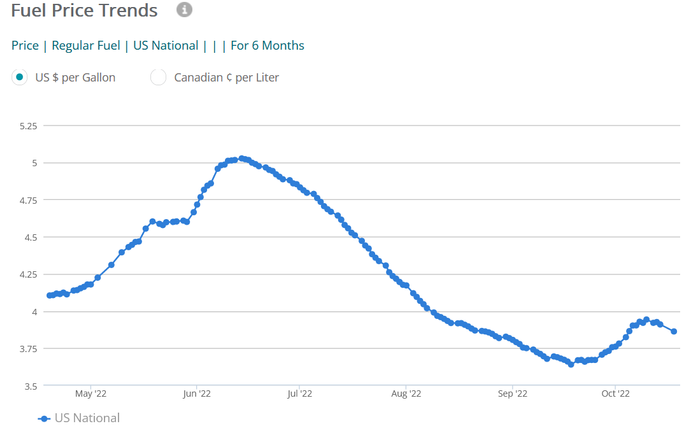 Here's what another release of oil from the Strategic Petroleum Reserve would mean for gasoline prices. Read More...

The Biden administration announced the release of more crude from the U.S. Strategic Petroleum Reserve on Wednesday, but analysts don’t expect such a move to lead to a significant fall in gasoline prices at the pump.

President Joe Biden on Wednesday said his administration plans to release 15 million barrels of oil from the SPR to complete the historic drawdown of 180 million barrels he announced in the spring. He added that the federal government will purchase oil to refill the SPR when prices fall to $70 a barrel.

“Transferring SPR crude oil from emergency reserves to commercial tanks now would likely not help in lowering retail gasoline prices, or do so only marginally,” Brian Milne, product manager, editor, and analyst at DTN, told MarketWatch. “Such a policy does not make sense.”

“ “Transferring SPR crude oil from emergency reserves to commercial tanks now would likely not help in lowering retail gasoline prices, or do so only marginally.””

Earlier this year, an SPR release was coordinated with International Energy Agency countries, as the market was reeling from uncertainty following the invasion of Ukraine by Russia, he said, adding that there was fear that 3.5 million barrels of crude oil per day or more could be lost from Russia. “That did not happen,” he said.

The problem is “not a lack of crude oil but a lack of refining capacity,” said Milne. “U.S. policy pushing away from oil consumption has led to refinery transitions to renewables, or outright closures. This trend accelerated during the COVID-19 pandemic.”

As of Wednesday afternoon, the average retail price for regular unleaded gas was $3.843 a gallon, down a dime from a week ago, according to data from GasBuddy. Prices, however, are still around 50 cents a gallon, or 15%, above the year-ago level.

The SPR release earlier this year might have shaved as much as 25 cents off the national average, which peaked at over $5 gallon in June, said Milne.

The bigger drivers lowering U.S. gasoline prices, however, were “sharply lower demand from China amid its zero-COVID policy that has stymied economic activity, and reduced transportation demand as millions of citizens were either locked down or had other restrictions reduce their mobility,” he said. “Domestically, climbing inflation, including high gasoline prices, has led consumers to reduce their driving.”

Milne also said that “releasing more oil from the SPR during a time of year when gasoline demand is seasonally lower, typically falling to the weakest point in January or February, suggests a lack of understanding of market dynamics.”

James Williams, energy economist at WTRG Economics, said that if an SPR release is an extension of the million-barrel-per-day release announced earlier this year, it would come at a time when the Organization of the Petroleum Exporting Countries and their allies, together known as OPEC+, have agreed to cut oil production by 2 million barrels a day starting in November.

The actual OPEC+ cut is closer to 800,000 to 1 million barrels per day, given that many of the group’s members cannot produce at their quota level, Williams said.

“So an additional SPR release would leave worldwide supply unchanged,” he said. Instead, “it would be a continuation of an already poor decision” by the Biden administration.

Williams points out that the SPR has been reduced by 37% since Biden took office. This, he said, leaves the U.S. “in a weaker position to assist other countries in case of a real supply interruption.”

The amount of crude oil in the SPR stood at around 468 million barrels in July — the lowest level since the mid-1980s, according to data from the Energy Information Administration.

Read: Why crude released from U.S. oil reserves may have ended up being exported overseas

However, SPR releases are “not in the best interest of the country,” Williams said.

“Politically, this is a strategic time to put more pressure on crude,” he said in note Tuesday. It’s shoulder season for demand — too late for high gasoline consumption and too early for maximum distillate consumption, he said.

Meanwhile, oil prices are “influenced by real and perceived conditions,” said Jeff Lenard, vice president of strategic industry initiatives at the National Association of Convenience Stores, or NACS. “’What if’ scenarios can often put upward pressure on commodity prices.”

“A release from the SPR would not significantly affect supply, but would likely be done to address perceptions,” said Lenard.

Still, the market could see something never witnessed before — “the price of gasoline may go negative to crude,” Kloza said.

“Thanks to the RVO and minimum processing costs, a break-even number for gasoline might be around $10 [a] barrel above crude,” he said. RVO stands for renewable volume obligations, which determine how many gallons of biofuel refiners will add to a motor fuel mix, according to trade group American Fuel & Petrochemical Manufacturers.

Refiners are making “so much money on the distillate cut of the barrel,” said Kloza, that “we may see truly negative margins for gasoline as [refineries] keep running at high rates because of profits” tied to production of distillates, which include diesel, as well as heating oil used for space heating and to generate electric power.

Distillate prices are “insanely high by all historical measures,” he said. In the U.S., futures prices for ultra-low sulfur diesel HOX22, -2.80%, often referred to as the heating-oil contract, was up nearly 68% year to date as of Wednesday.

Read: Here’s how much more U.S. households will pay to heat their homes this winter

“You will hear that global inventories of distillate are at the lowest level since 1982,” Kloza said. “The world had a global population of 4.6 billion in that year and it now boasts about 8 billion souls.”