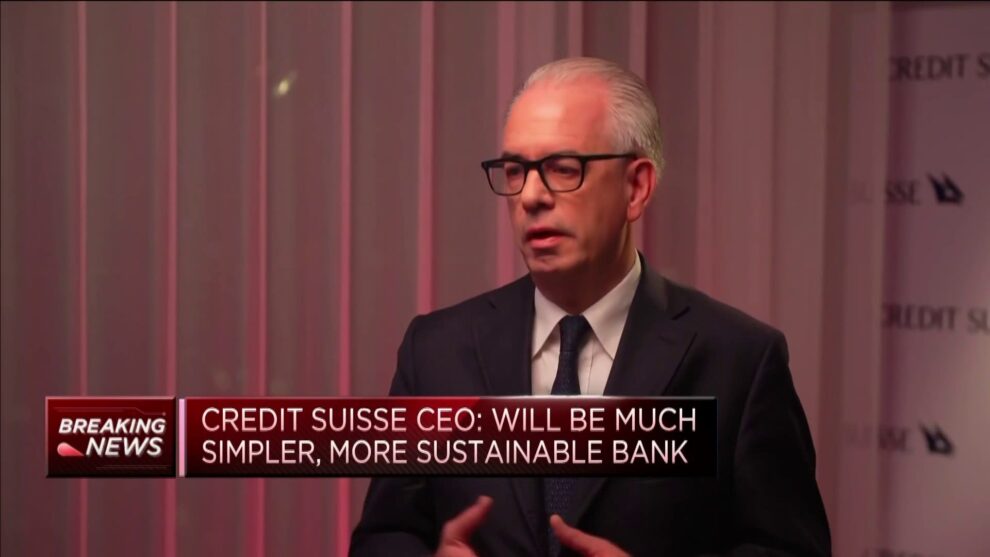 Credit Suisse has posted a quarterly loss that is significantly worse than analyst estimates, as it announced a massive strategic overhaul. Read more...

Credit Suisse on Thursday posted a quarterly loss that was significantly worse than analyst estimates, as it announced a massive strategic overhaul.

The bank noted that the loss reflected a 3.655 billion Swiss franc impairment relating to the “reassessment of deferred tax assets as a result of the comprehensive strategic review.”

Under pressure from investors, the bank revealed a major overhaul of its business in a bid to address underperformance in its investment bank and following a raft of litigation costs that have hammered earnings. New CEO Ulrich Koerner told CNBC on Thursday it represented the beginning of a “transformation into a new Credit Suisse.”

In its widely anticipated strategic shift, the bank vowed to “radically restructure” its investment bank to significantly cut its exposure to risk-weighted assets, which are used to determine a bank’s capital requirements. It also aims to cut its cost base by 15%, or 2.5 billion Swiss francs, by 2025.

The bank expects to incur restructuring charges of 2.9 billion Swiss francs by the end of 2024.

The transformation plan will see Credit Suisse split off its investment bank into an independent business called CS First Boston, raise 4 billion Swiss franc in capital through the issuance of new shares and a rights offering, and create a capital release unit to wind down lower-return, non-strategic businesses.

The aim is to reduce risk-weighted assets and leverage exposure by 40% each over the course of the restructure, while the bank also set out to allocate “almost 80% of capital to Wealth Management, Swiss Bank, Asset Management and Markets by 2025.”

Speaking to CNBC, Koerner said the bank will be “much more stable, will be sustainably profitable, much simpler in how it is set up, and for us, one of the most important things was how did we come to that solution? We started actually with the client needs and we designed everything around the client needs and ended up with what we are proposing today.”

“Number one, a radical restructure of the investment bank; number two, a significant reduction of costs; and number three, a further strengthening of our capital base, and I think with that, we have all the necessary ingredients … to go where we want to go,” he added.

Credit Suisse has been plagued over the past year by sluggish investment banking revenues, losses from the withdrawal of its business in Russia and litigation costs relating to a host of legacy compliance and risk management failures, most notably the Archegos hedge fund scandal.

Here are some other financial highlights for the third quarter: