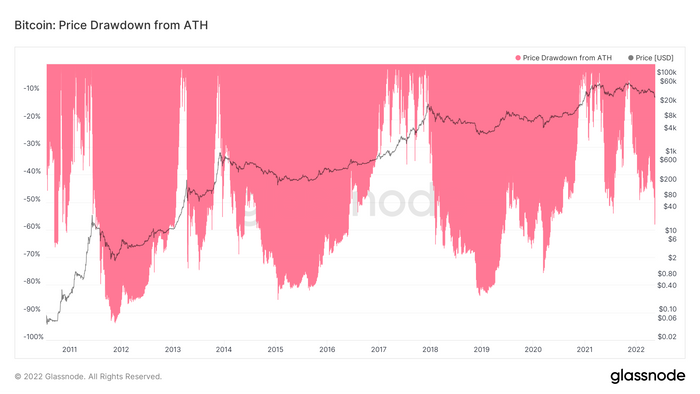 A 'bloodbath' week may herald the beginning of another crypto winter, some industry participants said. Read More...

It has been a bloodbath week, as some called it, for the crypto market.

Stablecoin USDTerra, or UST USTUSD, -5.66%, once among the top 10 largest cryptocurrency by market cap, lost its 1 to 1 peg against the U.S. dollar, falling to as low as 6 cents on Friday, according to CoinDesk data. LUNA LUNAUSD, -25.00, another cryptocurrency backing UST, fell nearly to zero from over $80 in early May, with its market capitalization shrinking by more than $40 billion from early April.

It marks “the largest wealth destruction event in the short history of the crypto markets,” since bitcoin was created in 2019, crypto trading firm QCP Capital wrote in a Friday note.

Explained: Why is UST, LUNA crashing? Collapse of a once $40 billion cryptocurrency, explained

Meanwhile, bitcoin BTCUSD, -1.01% on Thursday fell to $25,402, the lowest level since December 2020, before it rebounded to about $30,000 on Friday, according to CoinDesk data. The bitcoin fear and greed index currently stands at one of its lowest points, indicating extreme fear.

Tether USDTUSD, -0.01%, the largest stablecoin, briefly fell to as low as 96 cents against the dollar on Thursday, before it rebounded to $1.

More than $400 billion has been wiped out from the crypto market during the past seven days, according to CoinGecko. All sectors within the crypto space have seen double-digit losses during this period, with cryptocurrencies related to Web 3, the so-called next generation of the internet, posting the biggest loss of 41% on average, according to analysts at Messari.

The series of events may herald the beginning of another “crypto winter,” said one industry participant, echoing a common theme this week on Twitter.

Some are more optimistic. “It’s a pattern. Back when we look at what happened in 2014, the crash happened and there’s a big panic. People say, oh, crypto is dead. It’s not coming back. But of course, it has come back,” Mike Belshe, founder and chief executive at crypto infrastructure provider BitGo, told MarketWatch in an interview.

To be sure, the industry is still nascent and lightly regulated, while the crypto market remains volatile with high risks.

The chart below shows bitcoin’s previous drawdown from each cycle highs.

Some said bitcoin is nearing a “generational cyclical bottom.”

Bitcoin’s low on Thursday is close to its realized price, the aggregated cost basis of investors on-chain, which currently stands at $24,000, Will Clemente, lead insights analyst at bitcoin mining company Blockware Solutions, wrote in a Friday note.  “Any prices below realized price should be seen as extreme value,” Clemente wrote.

Historically, whenever bitcoin’s price approached the realized price, it indicated a buying opportunity, Clemente told MarketWatch in a recent interview.

“I think that this is just the beginning of an ongoing decline in crypto,” Jay Hatfield, chief investment officer at Infrastructure Capital Management, told MarketWatch in a recent interview.

Hatfield attributed bitcoin’s high return in 2020 and 2021 partly to the Federal Reserve’s quantitative easing policy. “We had an unprecedented increase in Fed liquidity, buying $120 billion a month of securities. And now we will have an erratic shift to a reduction in liquidity for $95 billion per month,” Hatfield said.

“The Fed hasn’t even begun to do quantitative tightening. They just said they’re going to,” Hatfield said.

Hatfield estimated bitcoin could fall to $20,000 by the end of this year, and said in the worst scenario, it may drop back to its pre-pandemic level, which was about $10,000. “I’m not predicting we’ll get there, but $10,000 would be a reasonable target,” Hatfield said. Hatfield compared bitcoin with Cathie Wood’s flagship Ark Innovation ETF ARKK, +11.82%, which is down more than 70% from its peak and at about the same level in March 2020.