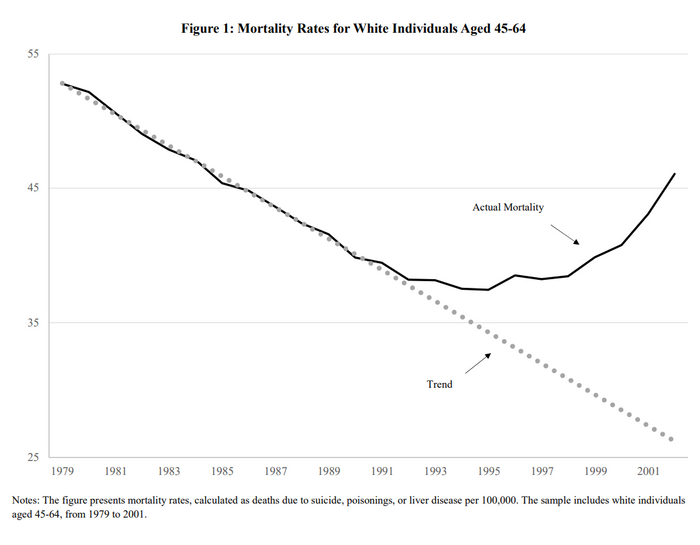 So-called deaths of despair such as from suicide or alcohol abuse have been skyrocketing for middle-aged white Americans.

The working paper, from Tyler Giles of Wellesley College, Daniel Hungerman of the University of Notre Dame, and Tamar Oostrom of The Ohio State University, looked at the relationship between religiosity and mortality from deaths of despair. The paper was circulated by the National Bureau of Economic Research.

The authors noted that many measures of religious adherence began to decline in the late 1980s. They find that the large decline in religious practice was driven by the group experiencing the subsequent increases in mortality: white middle-aged Americans without a college degree.

States that experienced larger declines in religious participation in the last 15 years of the 20th century saw larger increases in deaths of despair.

The researchers looked at the repeal of blue laws in particular. Blue laws limited commerce, typically on Sunday mornings. “These laws have been shown to be strongly related to religious practice, creating discrete changes in incentives to attend religious services that are plausibly unrelated to other drivers of religiosity,” they said.

The repeal of blue laws had a 5- to 10-percentage-point impact on weekly attendance of religious services, and increased the rate of deaths of despair by 2 deaths per 100,000 people, they found — accounting for a “reasonably large share of the initial rise in the deaths of despair.”

What’s also interesting is that the impact seems to be driven by actual formal religious participation, rather than belief or personal activities like prayer. “These results underscore the importance of cultural institutions such as religious establishments in promoting well-being,” they said.

They further added that they didn’t know of any cultural phenomenon that matches the mortality patterns, which are seen for both men and women, but not in other countries, and in both rural and urban settings, but mostly middle-aged, less-educated white individuals.

“The decline in religiosity matches mortality trends in all these characteristics,” they wrote.

The authors also pushed back on the opioid theory. They said OxyContin was first introduced as a prescription drug in 1996, yet already by then deaths of despair for middle-aged white Americans were well above trend.