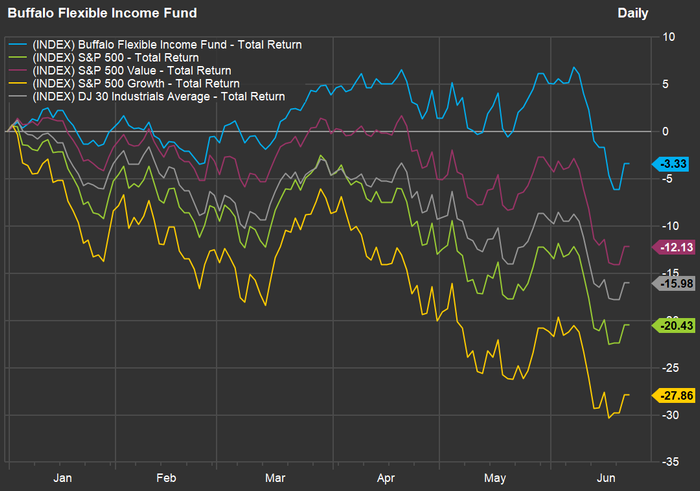 John Kornitzer explains why the Buffalo Flexible Income Fund has held up so well during the bear market. Read More...

By now even the most ardent tech and growth-stock enthusiasts realize the bull market is over. John Kornitzer’s approach to selecting high-quality stocks for the Buffalo Flexible Income Fund is one that has worked well during the bear market.

High inflation, uncertainty in so many industries amid supply-chain issues and labor shortages, the Federal Reserve’s tighter monetary policy and the end of pandemic-period federal stimulus mean investors had better focus on quality and safety.

Value stocks have held up relatively well this year, but check out the results of Kornitzer’s strategy for the Buffalo Flexible Income Fund BUFBX, -0.85% through June 21, compared with the S&P 500 SPX, -0.13%, the benchmark index’s value and growth subsets and the Dow Jones Industrial Average DJIA, -0.15%. (All performance numbers in this article include reinvested dividends):

The fund is down only 3% — a striking performance as the S&P 500 has fallen 20% and the benchmark index’s value subset has declined 12%.

Kornitzer Capital Management was founded in 1989, is based in Mission, Kansas, and has between $7 billion and $8 billion in assets under management, including the 10 Buffalo funds and private and institutional clients.

The Buffalo Flexible Income Fund was established in 1994 and has $455 million in assets. Its objectives are to provide investment income and capital growth. It can invest in bonds, but now is almost entirely invested in large-cap stocks. The fund’s dividend income is enhanced by writing covered calls, a strategy discussed in detail here.

A call option is a contract that allows an investor to buy a stock at a particular price until the option expires. A covered call option is one that you write when you already own the stock. Kornitzer said he sells covered calls deeply “out of the money,” so he would only be forced to sell a stock if it were to rise at least 20%, when he would be likely to trim or sell a position anyway.

Dividends and growth at a reasonable price

“I like companies that pay a dividend,” Kornitzer said. “If I hold a stock paying 3% for 10 years and the stock remains flat, I have gotten 45% of my money back.”

He also cited two non-dividend payers as examples of how bad things can get for long-term investors:

When asked whether companies’ cash flows were especially important, Kornitzer emphasized “cash flow for the shareholder.” He prefers companies with relatively low debt, growing profit “and everything that goes with it.”

“You want a solid company that is going to survive,” he said.

The dividend yield for the Buffalo Flexible Income Fund’s portfolio is about 3%, Kornitzer said. He agreed that a reasonable goal for the enhancement of its income through covered-call writing would be another 1%.

When adding stocks to the portfolio, Kornitzer said he typically looks for a minimum dividend yield of 2% to 3%. But a stock in the Buffalo Flexible Income Fund may have a low current dividend yield. Microsoft Corp. MSFT, -0.24% is an example, with a yield of only 0.98%. However, Kornitzer said that based on his original cost, the yield on the fund’s Microsoft shares is now over 10%. (Click here for more about dividend compounding over long periods.)

He said he trimmed his Microsoft holdings “at $340 to $350,” adding that Microsoft was again attractive when it had fallen below $250 recently.

Kornitzer cited the fund’s 20% concentration in energy stocks as one reason for the outperformance, although he said he had “sold a bunch this year already.” One example was Hess Corp. HES, -4.08%, which he sold around $130 a share. Hess closed at $107.74 on June 21.

Kornitzer emphasized an active management style, which includes cutting positions if they become too large or selling outright when stock prices hit his targets.

Kornitzer believes the energy sector can perform well from here, even as oil prices have pulled back a bit from their peaks. West Texas Intermediate crude oil (WTI) for July delivery CL.1, +0.10% was trading for $104.48 a barrel early on June 22, down from an intraday peak front-month price of $130.50 on March 7, according to continuous front-month contract CL00, +0.10% quotes.

“Wait until people see second-quarter earnings for these companies – it will be unbelievable,” he said.

Kornitzer said holding “the right drug stocks” has also fed the Buffalo Flexible Income Fund’s success this year. He named Eli Lilly & Co. LLY, +3.14% as an example. The stock is up 8.5% this year and the dividend yield, based on the fund’s cost, is about 11%, Kornitzer said. He has trimmed the position to make it about 3% of the fund’s portfolio.

Eli Lilly most recently raised its dividend by 15% in December.

He likes to hold insurance companies over the long term, for continual dividend increases. One example is Arthur J. Gallagher & Co. AJG, +1.35%, which raised its dividend by 6% in January. Another is Allstate Corp. ALL, +0.22%, which raised its payout 5% in February.

“So far this year, 70% of our companies have raised dividends,” Kornitzer said.

When asked about opportunities to buy stocks after significant price declines, Kornitzer suggested some long-term thinking: “Any company supporting robotics will have a bright future,” he said. “Visit any large industrial plant today and they are implementing robots if they cannot hire anyone. They don’t lay anybody off.”

Now read: Four value-stock picks from a fund manager who steers clear of the energy sector

And: Here’s a winning investment strategy for a long period of commodity shortages