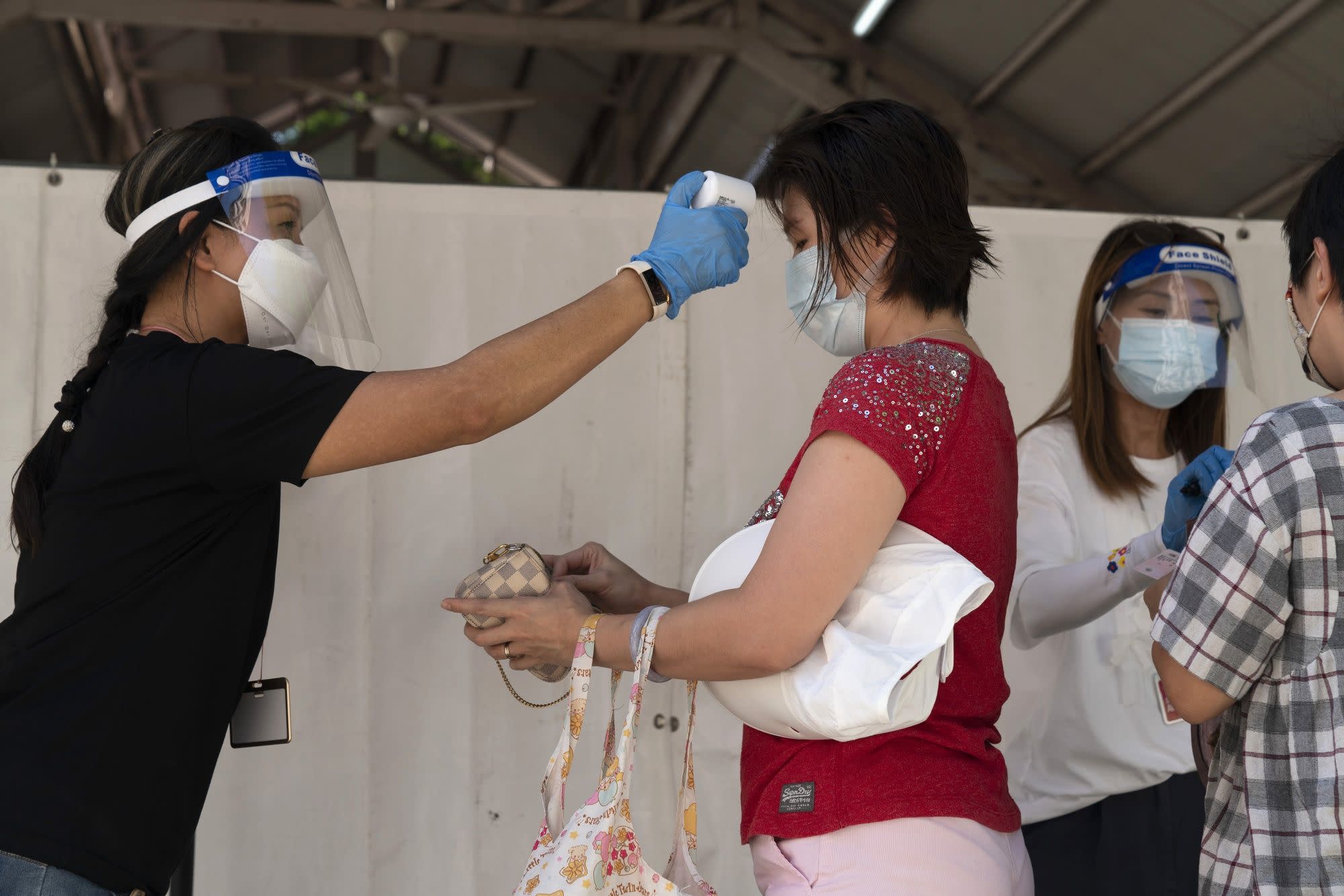 The “hyper-transmissible” variant may eclipse other virus mutations in the U.S. within weeks, CDC Director Rochelle Walensky said. Some 1,000 U.S. counties with low vaccination rates, notably in the Southeast and Midwest, are particularly vulnerable. And Australia plans to cut international arrivals in half to fight the delta variant.

Indonesia’s food and drug regulator has granted emergency use authorization for the Covid-19 vaccine made by Moderna, its chief Penny Lukito says in a press briefing. Moderna’s Covid vaccine is the first M-RNA shot to obtain EUA in Indonesia, and will be administered to those aged 18 years and older, Lukito said.

Prime Minister Scott Morrison has announced Australia will cut international arrivals by 50% in a bid to halt a surge in the delta variant of the coronavirus, which this week forced half the population into lockdown.

In his first appearance after emerging from self-isolation in the wake of traveling to Europe last month to meet leaders attending the G-7 summit, Morrison said the leaders had also agreed to a pathway to switch from virus suppression to focus on reducing the risk of serious illness, depending on a high vaccination rate that’s yet to be determined.

Thailand reported 61 new deaths from Covid-19 on Friday, the third straight day of record fatalities, according to the Center for Covid-19 Situation Administration. The country reported 6,087 new cases, the highest single-day tally since May 17.

The surge in infections and deaths, especially in virus epicenter Bangkok, stemmed from the spread of more virulent delta strain amid a low vaccination rate of just 7% nationwide. Since the start of this current wave of outbreak in early April, the country has reported more than 240,000 infections, or about 90% of the nation’s total cumulative cases.

After a slow start due to supply shortage, South Korea has stepped up the pace of inoculations with about 30% of the population now having had at least one shot. With more people vaccinated, the government began to ease restrictions on number of people that can gather and how long businesses could remain open.

But with the latest rise in Covid-19 cases, the capital city of Seoul has pulled back on easing the restrictions, leaving the ban on private gathering of more than four people in place for one more week.

Macau and Hong Kong don’t have a specific date for bilateral quarantine exemption, but have agreed on preliminary conditions for travelers, Tai Wa Hou, representative of the Macau Health Bureau, said at a briefing on Thursday. In order for exemption measures to come into effect, Hong Kong will need to have no untraceable local cases, and if no community clusters arise from cases that are epidemiologically linked to imported cases or traceable local cases for 14 days.

The company said in a statement Thursday that recipients of its vaccine produced strong neutralizing antibodies over the course of at least eight months against all variants including delta, which was first seen in India and has been spreading around the globe.

The J&J shot provides less protection initially than messenger RNA vaccines from Pfizer and Moderna, and experts have been discussing whether some people may need booster shots to keep the virus at bay long-term.

The Japanese government and Tokyo Olympic organizers are planning to hold some events without spectators amid concern over a virus resurgence in the capital, the Yomiuri reported, citing several officials it didn’t identify.

The government is also planning to extend strong virus measures that are in place in Tokyo and its 3 neighboring prefectures by about a month, covering the entire duration of the Olympic games scheduled to end Aug. 8, the Sankei newspaper reported, without attribution.

Facebook Inc. is under investigation by the attorney general for the District of Columbia over whether it has taken adequate steps to curb the spread of misinformation about vaccines.

Attorney General Karl Racine is seeking internal documents that show how the social media giant penalizes users who violate its misinformation policies around vaccines, as well as materials related to a Facebook study about vaccine hesitancy among users, according to a copy of a subpoena issued by Racine’s office last month.

The subpoena also demanded data on the total volume of content that has been removed or demoted by Facebook for violating its vaccine misinformation policies.

The French government is preparing a draft bill to make vaccination against Covid-19 mandatory for hospital and nursing home workers, Agence France-Presse reported, citing a government source. Only 57% of nursing homes employees and 64% of workers at health institutions are vaccinated, according to Federation Hospitaliere de France, a group that calls for vaccination to become mandatory.

A bill could be discussed in parliament by the end of the month, according to regional press reports, although it’s more likely to be assessed in September. So far in France 23.3 million people are fully vaccinated. The country has a population of around 67 million.

The Biden administration is sending response teams to unvaccinated pockets of the U.S. in an attempt to combat the spread of the highly transmissible delta Covid-19 variant.

The “hyper-transmissible” delta variant is likely to become the dominant one in the U.S., underscoring the importance of further expanding vaccination, said Rochelle Walensky, director of the Centers for Disease Control and Prevention. Delta accounts for almost 50% of newly recorded infections in parts of the U.S., she said.

“The delta variant is predicted to be the second-most prevalent variant in the United States and I expect that in the coming weeks it will eclipse the alpha variant,” Walensky said in a briefing.

About 1,000 U.S. counties have vaccination coverage of less than 30%, primarily in the Southeast and Midwest, and rates of the disease are increasing in those locations, she said. Those areas “are our most vulnerable,” Walensky said.

With the U.K. hit by the delta variant, health authorities say 1,991 Covid-positive people from Scotland have attended one or more Euro 2020 events since June 11. Scotland on Thursday reported more than 4,000 cases, a one-day record. Wembley Stadium will host the tournament’s semifinals and final.

Adults traveling from the Greek mainland to the country’s numerous islands will be required to show a Covid-19 vaccination certificate or a negative PCR test carried out no earlier than 72 hours before travel or a negative rapid test no older than 48 hours, Deputy Citizen Protection Minister Nikos Hardalias said.

The requirement comes into effect on July 5, including for foreign tourists. Greece has seen a slight increase in the cases over the past week.

Bruce Springsteen, Paul Simon and Jennifer Hudson will be among the performers at an Aug. 21 Central Park celebration of New York City’s comeback from the Covid-19 pandemic lockdown, Mayor Bill de Blasio said.

The concert will be part of a “Homecoming Week” intended to market the city to tourists in an effort to bring back an industry that once welcomed more than 60 million visitors a year.

The U.K. recorded 27,989 new cases, the second straight day that the total is at a five-month high.

Hospital admissions in England are rising sharply, according to the Covid-19 Actuaries Response Group. The 7-day average climbed to 227, three times as many as in mid-May, with nearly all regions showing a strong increase.

India’s Cadila Healthcare Ltd. has sought approval from the local drug regulator for its DNA-based vaccine against Covid-19 after the shot proved effective in clinical trials.

The drugmaker applied for emergency use authorization for the shot, which uses DNA to instruct the body’s cells to produce proteins that spark a protective response, according to an exchange filing Thursday. The Phase 3 trials on more than 28,000 volunteers across 50 centers showed an efficacy rate of 67%, Cadila said. That is below the rates of the shots from Moderna Inc. and Pfizer-BioNTech that use messenger RNA technology.

Scotland reported the biggest daily increase in cases since the start of the pandemic. The country’s devolved government, which is responsible for health, identified 4,234 new infections in the last 24 hours, the third daily record in the space of four days.

The Scottish government is counting on vaccinations breaking the link between infection and serious illness and is still planning to ease most of the remaining restrictions on movement and social interaction in early August, First Minister Nicola Sturgeon said yesterday.

German vaccine authority STIKO recommended that people who received AstraZeneca as the first Covid-19 shot get an mRNA shot as their second jab regardless of age, according to a statement. The authority cited studies that show the immune response from a mixture of vaccine technologies is better than two shots of the AstraZeneca vaccine.

Coronavirus cases in Africa are rising so quickly that the continent will soon face its worst week since the start of the pandemic, with the more infectious delta variant becoming more widespread.

Almost 202,000 new cases of the illness were reported in the past week, and infections are doubling every three weeks, World Health Organization Regional Director for Africa Matshidiso Moeti said in an online briefing Thursday. More than 5.4 million cases have been reported on the continent, with 141,000 deaths, she said.

U.K. Prime Minister Boris Johnson said some “extra precautions” could still be required even after the July 19 date he has said will mark the end of the country’s Covid restrictions.

The premier said he was “impatient” to get back to normal life but would not rule out keeping regulations or guidance in place on wearing masks in crowded public areas or on people keeping a specified distance apart.

Singapore is slated to announce a further easing of Covid-19 restrictions in mid-July as part of a strategy for reopening the economy that may also include the long-awaited return of leisure travel by year-end, Health Minister Ong Ye Kung told the Straits Times.

With virus clusters in the community coming under control, Ong told the newspaper that the government was looking at raising the number of people allowed to dine together in restaurants from two beginning July 12, while exploring “other openings” as well.

Malaysia will impose tightened movement restrictions in dozens of sub-districts across Selangor, its richest state, and several localities in Kuala Lumpur beginning Saturday to curb a worsening coronavirus outbreak.

People staying in districts such as Petaling and Klang must remain at home throughout the so-called Enhanced Movement Control Order from July 3 until July 16, Defense Minister Ismail Sabri Yaakob said in a statement Thursday. Only one person may leave the home at a time to purchase essential items, he said.

Six fully vaccinated people died in the Seychelles, which has the highest per-capita vaccinations in the world. Five had received Covishield, an Indian-made version of the AstraZeneca vaccine, and one got the Sinopharm shot, Jude Gedeon, the island nation’s public health commissioner, told reporters.

Facebook set to finance regional Australia newspaper fund
The Moneyist: My intelligent, talented retiree husband moonlights as a handyman. He charges $20 an hour, but is not insured and doesn’t pay tax
Comment

: Why COVID-19 lockdowns in Europe are set to get lighter — but last longer