(Bloomberg) -- Didi Global Inc. is on the cusp of pulling off one of the biggest U.S. initial public offerings of the past decade, the culmination of five years of battling first Chinese regulators and then Covid 19. Now Beijing again threatens to spoil the party.Didi, the scrappy upstart that defeated Uber Technologies Inc. in 2016 before embarking on an ambitious international expansion, aims to raise as much as $4 billion in New York. But like its one-time foe, the car-hailing giant has had t Read More... 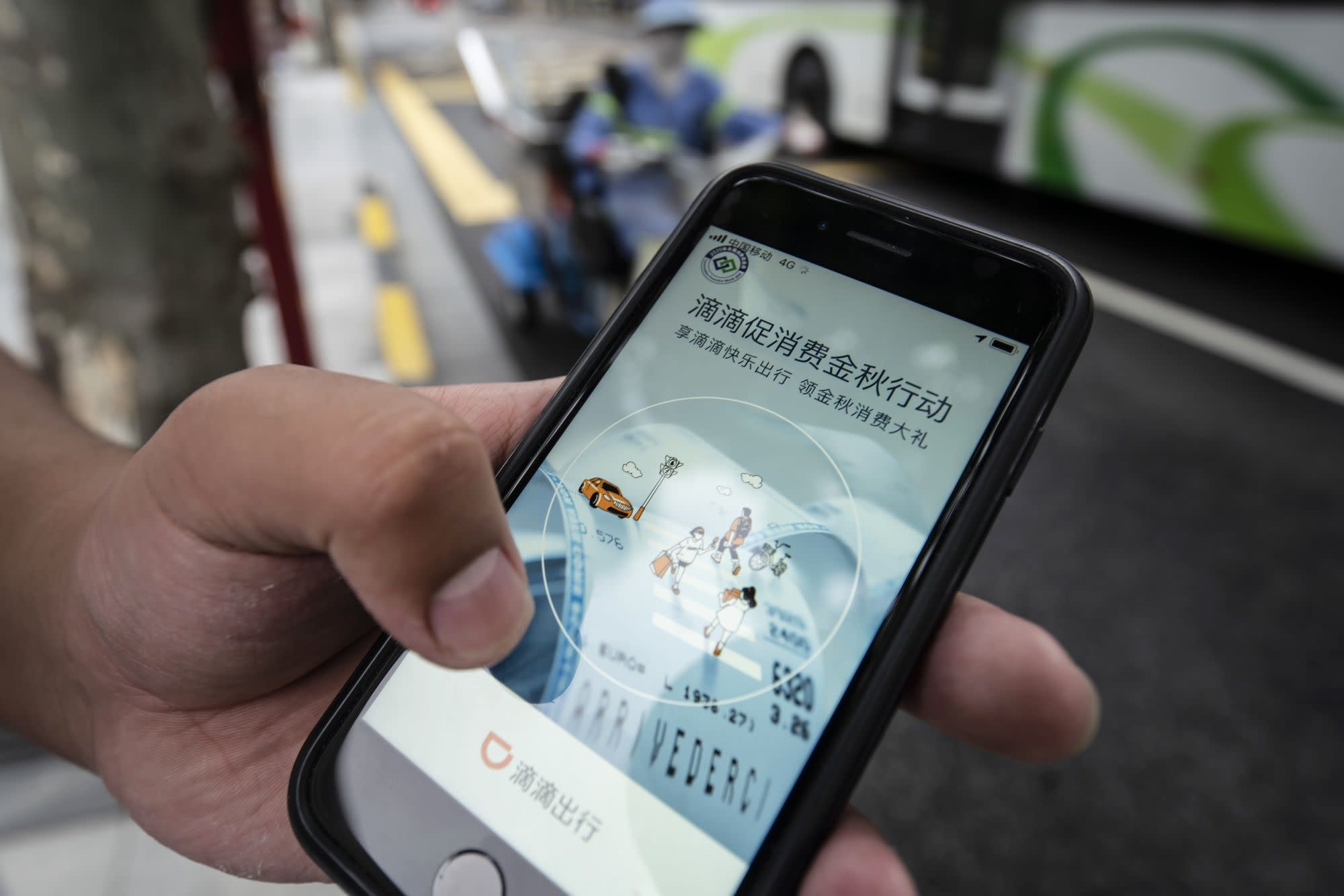 (Bloomberg) — Didi Global Inc. is on the cusp of pulling off one of the biggest U.S. initial public offerings of the past decade, the culmination of five years of battling first Chinese regulators and then Covid 19. Now Beijing again threatens to spoil the party.

Didi, the scrappy upstart that defeated Uber Technologies Inc. in 2016 before embarking on an ambitious international expansion, aims to raise as much as $4 billion in New York. But like its one-time foe, the car-hailing giant has had to settle on going public at a far lower market value than previously targeted.

It’s now seeking $67 billion, barely up from its last round of funding in 2019, and far short of the most bullish expectations for $100 billion — a reflection of the regulatory scrutiny that’s hounded it ever since a pair of murders in 2018 that founder Cheng Wei has called its “darkest days.”

The Beijing-based firm responded to the subsequent crackdown with a fusillade of efforts to improve security across its network of half a billion. It began to explore new businesses to offset slowing ride-hailing growth, from car repairs to grocery delivery. That served it well during the coronavirus pandemic, when whole cities came to a standstill. The company delivered an $837 million profit in the March quarter — a rarity among recent high-profile IPOs like Kuaishou Technology.

But now it faces a greater threat: an antitrust probe into China’s internet firms with uncertain outcomes for Didi and peers like major backer Tencent Holdings Ltd. The company, which was among 34 internet giants ordered by regulators in April to correct excesses, had warned in an earlier filing that it couldn’t assure investors that government officials would be satisfied with its efforts or that it would escape penalties. In May, the antitrust watchdog ordered Didi and other leaders in on-demand transport to halt practices from arbitrary price hikes to unfair treatment of drivers, expanding a crackdown on the country’s internet giants.

“The company actually delivered positive Q1 earnings as profitability has been in short supply for many recent China IPOs,” said Brock Silvers, chief investment officer at Hong Kong-based private equity firm Kaiyuan Capital. Yet “given the potential severity of China’s closed-door and unappealable regulatory process, investors may have been reluctant to assume such significant yet unquantifiable risks.”

Didi, one of the single largest investments in SoftBank Group Corp.’s portfolio, is marketing 288 million American depositary shares for $13 to $14 apiece, according to a filing Thursday with the U.S. Securities and Exchange Commission. Didi plans to close its IPO books Monday, a day earlier than anticipated, people with knowledge of the matter told Bloomberg News. Recent market debutantes have cut short investor outreach during a time of heightened demand. A company representative didn’t immediately respond to a call and messages seeking comment.

At the high end, the company would have a market value of about $67 billion based on the outstanding shares listed in the filing. Accounting for restricted stock units, its diluted value would reach about $73 billion. That’s at the lower end of a range that had stretched up to $100 billion as recently as April, suggesting investors balked at the price tag.

“Clearly, there’s an overhang broadly on China’s technology giants in regards to regulation and that clearly is extending to Didi,” said Bloomberg Intelligence analyst Matthew Kanterman.

The same happened with Uber, which was valued at $75.5 billion in its 2019 IPO, well below the $120 billion that bankers had touted a year earlier. Even at the lower valuation, the ride-hailing firm had a rocky start: the shares closed 7.6% lower on their debut and it took almost a whole month to return to the $45 price they were sold at. Since then, Uber has climbed nearly 13%, giving it a market value of $95 billion, though it’s still down from its February 2020 peak, before the pandemic spread worldwide.

Read more: The IPO Market Has Never Been Hotter Than It Is Right Now

Both Didi and Uber have spent years in the red. The U.S. firm had reported an annual profit just once in its history — in 2018 — buoyed by asset sales and a higher estimated value for Didi, which it received a stake in as part of its China exit.

For the three months ended March, Uber reported a net loss of $108 million on sales of $2.9 billion, though Chief Executive Officer Dara Khosrowshahi has committed to achieving an adjusted quarterly profit by the year-end. The firm operates in 70 countries worldwide, with food delivery growing as a contributor to earnings and roughly 45% of its profit derived from markets outside the U.S.

Meanwhile, its Chinese peer’s profit for the March quarter follows at least three straight annual losses. Revenue at Didi during the period was about $6.4 billion, with more than 90% coming from its home market, according to the SEC filing.

“Uber’s business segments and geographical distribution are much more diversified compared to Didi, which is more concentrated in ride hailing business with a focus on mainland China market,” said Margaret Yang, a strategist at DailyFX in Singapore.

Despite missing the target valuation, Didi’s debut remains a milestone.

“There will always be some questions about cash conversions, and pricing and the take rate and a lot of people want to compare the take rate to Uber,” said Oliver Cox, portfolio manager of the JPMorgan Pacific Technology Fund. “My experience with IPOs, there are always going to be some negative elements but I want to focus a lot more on what the company might be able to achieve over the next five to 10 years.” He added that “on balance,” he had a positive view on the outlook for Didi.

Didi, whose shares had reportedly been trading at a valuation of about $95 billion on the private market this year, is going public in what is shaping up to be a record year globally for IPOs. A blank-check company listing boom in the U.S. in the first couple months of 2021, as well as historically low interest rates and monetary stimulus, has led to a flurry of share sales, including by some of the world’s hottest tech companies. An all-time high of almost $350 billion has been raised in initial public offerings in the first six months of this year, according to data compiled by Bloomberg, surpassing the previous peak of $282 billion from the second half of 2020.

The IPO would be sixth-largest in the U.S. during the past decade, topped only by Uber as well as the likes of Alibaba Group Holding Ltd., Facebook Inc. and, most recently, Coupang Inc., according to data compiled by Bloomberg.

Still, creeping inflationary pressures have injected volatility into markets, causing investors to pivot away from the high-growth stocks that saw phenomenal share price rallies last year. That has rippled through the IPO market, with investors becoming more selective about which companies they back.

Another concern in Didi’s case is the bottom line. Didi accelerated its listing plans after its business rebounded as the pandemic ebbed in China. But its efforts to diversify away from its core Chinese ride-hailing business have weighed on the outlook for continued profitability.

It’s planning to launch in Western Europe this year, Bloomberg News reported in February, adding to a roster of some 15 countries, excluding China. Didi has also pumped hundreds of millions into researching autonomous driving technology and has detailed plans to build self-driving electric vehicles.

In particular, it has invested heavily in so-called community buying, one of the most fiercely contested arenas in China today, one that deep-pocked rivals including Alibaba, Meituan and JD.com Inc. are also eyeing. Those expansions contributed to a $1.6 billion loss last year on sales of $21.6 billion.

“Similar to Uber, the core mobility business is now profitable on an adjusted EBITA basis. It’s the other businesses that are still loss-making because they haven’t scaled yet,” Kanterman said.

(Updates with Didi closing its books early in the seventh paragraph)

The Moneyist: ‘From the start, problems began’: My sister persuaded me to rent my condo to my niece at below-market price — then they both moved in
Indian Game Streaming Startup Loco Gets Krafton’s Backing
Comment

The Moneyist: My son, a college student, received 3 stimulus checks. I’m a dad trying to teach ethical behavior? What should we do?

Aphria Inc. Announces Election of Board of Directors and Executive Appointments and Promotions

The Conversation: Finally, signs of a crackdown on emotional support animals on airplanes