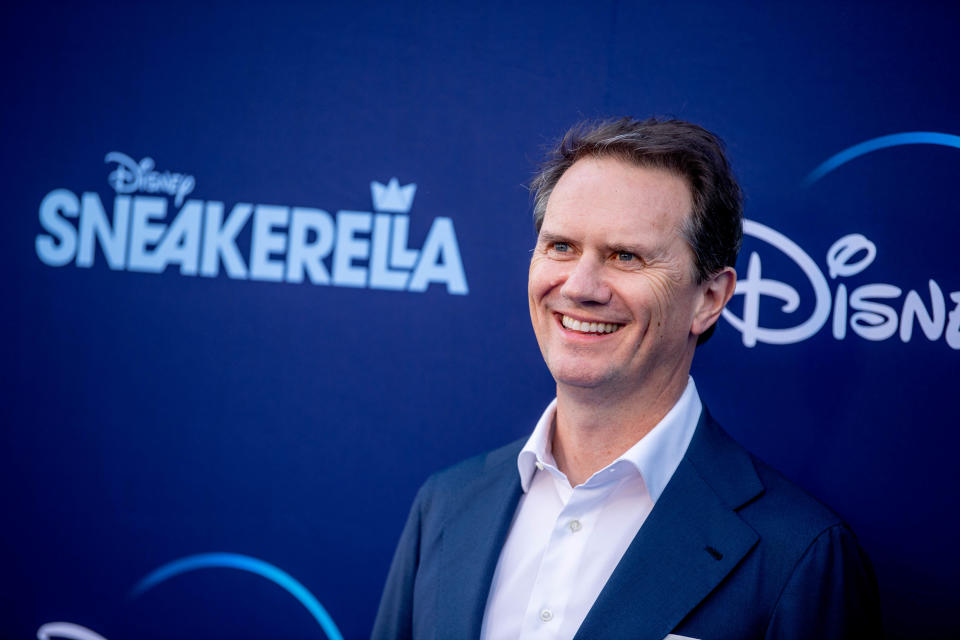 Rice, who served as chairman of Disney General Entertainment Content after joining the company in 2019, was reportedly dismissed by Chapek last week over issues surrounding his cultural fit.

Long viewed as a possible successor to Chapek by industry insiders, Rice’s contract was recently renewed even though it did not expire until the end of 2024. Rice has been replaced by his top lieutenant, Dana Walden.

“Chapek just made another massive mistake,” one industry executive told The Hollywood Reporter.

“It’s not good for the company. Morale is terrible,” added another.

Disney voiced its support for the embattled CEO.

“The strength of The Walt Disney Company’s businesses coming out of the pandemic is a testament to Bob’s leadership and vision for the company’s future,” Chairman of the Board Susan Arnold stated. “In this important time of business growth and transformation, we are committed to keeping Disney on the successful path it is on today, and Bob and his leadership team have the support and confidence of the board.”

Chapek also engaged in a public battle with “Black Widow” star Scarlett Johansson, who sued the company over “breach of contract” after it decided to release the Marvel film on Disney+ the same day it hit theaters. Johansson and Disney eventually settled.

More recently, Chapek found himself in the political crossfire of Florida Governor Ron DeSantis, who revoked the company’s special tax district following Disney’s unfavorable reaction to the Parental Rights in Education Act, or what critics have dubbed the “Don’t Say Gay” bill.

Chapek, who initially decided not to speak publicly on the matter, opted to work behind the scenes in an attempt to soften the legislation. That didn’t work.

The executive eventually reversed course following intense backlash and a string of employee-staged walkouts. Chapek publicly denounced the act during the company’s annual shareholder meeting on March 9 and directly apologized to employees in a company memo.

Still, Chapek was criticized for taking a soft stance, and the apology was looked by many as too little, too late.

“[Chapek] probably thinks this now and I do too … he should have come out right away,” Cockerell said. “You can’t wait a week to decide how you’re going to respond,”

Cockerell added that Disney’s culture of fostering an inclusive workforce comes with an expectation to “stand up and support everyone” — further underscoring the clash between Disney’s employees and Chapek’s leadership style.

Disney is not the only media giant dealing with leadership and cultural issues along with a tumbling stocks.

The streaming company recently updated its company culture guidelines for the first time since 2017, clarifying its stance as a pure play media giant.

The platform wrote that “not everyone will like—or agree with—everything on our service.” Rather, “we let viewers decide what’s appropriate for them, versus having Netflix censor specific artists or voices.”

Netflix added some employees may need to work on titles they “perceive to be harmful,” warning, “if you’d find it hard to support our content breadth, Netflix may not be the best place for you.”

The update follows last year’s employee walk-outs over the release of “The Closer,” Dave Chappelle’s controversial comedy special which critics viewed as transphobic.

At the time, Netflix defended the special with Co-CEO and Chief Content Officer Ted Sarandos sending a letter to employees that read in part: “While some employees disagree, we have a strong belief that content on screen doesn’t directly translate to real-world harm.”

Netflix Co-Founder Marc Randolph, who served as the company’s first chief from its inception in 1997 to 2003, told Yahoo Finance that he supports Netflix’s decision of transparency, saying the culture update “doesn’t sound so egregious.”

All companies should continue being “honest and clear” when it comes to official stances on various issues, he continued, and ultimately “let customers decide.”

Randolph further explained that previously, “it was very straightforward to either ignore these issues or find some way to straddle them [but] that has become increasingly difficult,” adding: “Thank goodness I’m not the CEO of a major media company today.”

Spotify: We will not ‘take on the position of a content censor’

Spotify faced its own content censorship debate earlier this year.

The platform came under fire for hosting Joe Rogan’s controversial podcast, which critics slammed for spreading misinformation surrounding COVID-19 vaccinations. The stock is also down 57% YTD.

Notable artists including Neil Young, Joni Mitchell, Nils Lofgren, David Crosby, and Stephen Stills, among others pulled their music off the platform in an effort to oust Rogan — by far Spotify’s most popular personality, with 11 million listeners.

Ultimately, the platform sided with Rogan as Spotify CEO Daniel Ek reiterated that the company would not “take on the position of a content censor.”

And despite the controversy, the service continued to add users, beating Wall Street estimates by reporting monthly users of 422 million in the first quarter.

Nevertheless, CFRA analyst John Freeman called out Spotify’s “sloppy handling” of the controversy in an interview with Yahoo Finance, saying it soured his fundamental view of the company.