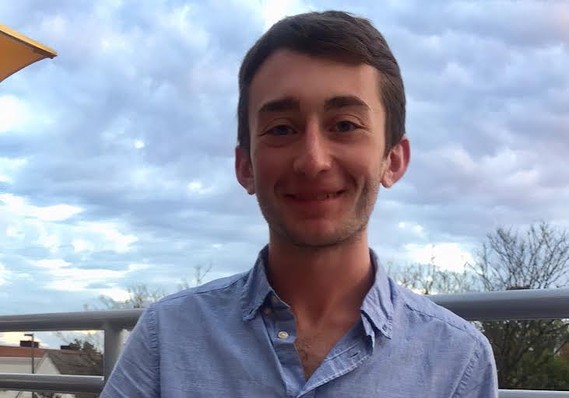 Contracting COVID-19 on a first date sounds too improbable, even for Hollywood. ‘I don’t blame her at all, we both had a really fun time together,’ says Nick Crawford, 23. Read More...

Nick Crawford’s online dating story begins like many other single people’s. Swiping, liking and messaging until you find somebody who wants to go on a date with you.

But its ending has a twist. Crawford’s dating adventures may have led to both he and his date contracting COVID-19, the disease caused by the novel coronavirus, but it didn’t end there. The courtship started out so promisingly, and it’s still going. “I really liked her smile and her eyes,” said Crawford, who is a web designer and developer. “She also seemed really active and well traveled.”

Dispatches from a pandemic: ‘Would you risk your life for a bagel? Or a jar of marmalade?’ A New Yorker’s survival guide to navigating grocery stores during the coronavirus pandemic

Crawford says their night out happened after date took place on March 7, four days before the World Health Organization declared the outbreak of coronavirus a pandemic. While the coronavirus was a big story at that time — it was the lead story on MarketWatch that morning — many people still weren’t that worried. This was also before President Trump curbed international travel, and before the National Emergency was declared. The U.S. was still holding large sporting events.

‘I guess at one of the bars we went to, both of us ended up contracting what we would later find out is COVID-19.’

In fact, Trump wrote on Twitter TWTR, -3.90%  on March 9, two days after Crawford’s date and two days before the travel ban: “Last year 37,000 Americans died” from the flu. “Nothing is shut down, life & the economy go on,” he added. But the government’s position and the national mood, Crawford added, shifted dramatically in the days after their date. This week, President Trump said, “Nothing would be worse than declaring victory before victory is won.”

After exchanging messages for a while on a popular dating app named Hinge, Crawford and his date decided to meet up in person. “At that point, coronavirus wasn’t even a real threat,” Crawford said. “It didn’t feel real yet.”

A spokesperson for Hinge said the company doesn’t comment on particular users, but directed this reporter to a section on Hinge’s Help and Safety page about the company’s COVID-19 response, which includes 5 general health tips from the WHO like maintaining social distance and washing hands frequently. There is no mention of safe dating tips at this time. (The implication being: Don’t go on dates.) “We want everyone to stay safe during this challenging time,” the site states.

“I guess at one of the bars we went to, both of us ended up contracting what we would later find out is COVID-19.” Crawford’s date has also experienced flu-like symptoms and has taken a test for COVID-19. She is still awaiting the results of that test. One of their friends they went out with that night later tested positive for the novel coronavirus.

The evening consisted of bar-hopping at a few Brooklyn establishments and meeting up with some of his date’s friends. This was more than a week before New York Governor Andrew Cuomo ordered the shutdown of restaurants and bars, allowing only take-out and delivery.

Crawford, 23, says after the March 7 date he began to feel flu-like symptoms and went to a walk-in Minute Clinic in New York. He received a test for the normal flu which came back negative, but doctors refused to give a test for the coronavirus. Doctors told him they didn’t have enough tests, and even if they did that he was not part of the high-risk population.

‘We have spent a lot of time together since then, quarantining together. It’s pretty evident that if she has that I also have it.’

Doctors told him to quarantine at home anyway because he “probably” has the coronavirus, but it can’t be confirmed. “I don’t blame her at all, we both had a really fun time together on our first date,” Crawford added.

This all may feel like bad news, but Crawford doesn’t seem as glum as one might think. He actually seems quite upbeat. He now has somebody to stay inside with. “We have spent a lot of time together since then, quarantining together,” he told MarketWatch. “It’s pretty evident that, if she has it, I also have it.”

While most people are social distancing with their immediate families and keeping the recommended six feet apart, or having virtual dates while they browse dating apps like Hinge, OKCupid, Match.com MTCH, -0.11%   and location-based apps like Tinder and Grindr, Crawford says he and his companion, who declined to be interviewed for this article, feel fortunate. He says they see each other 2-3 times per week.

The Moneyist: ‘Coronavirus has ruined everything. My IRA is a shambles and my husband refuses to work — he has bounced from job to job, and has finally landed on the couch’

Two people contracting the coronavirus on a first date is an improbable love story, he believes, even for Hollywood. To employ a movie term, Crawford does regard the convergence of his medical record and dating record as unusual, and he hopes that it’s just getting started. When asked about their future, Crawford is hopeful this time things could work out. “I’d probably tell my grandkids the story of how we met,” he texted, adding a smiley-faced emoji.

He is philosophical about the circumstances of their first meet, and realizes how lucky they are to have mild forms of COVID-19, especially when so many Americans have not been nearly as fortunate. Crawford also says he went on this date and socialized with his friends before anyone realized that the virus was reportedly taking such a hold in the U.S. “It didn’t feel real yet,” he said. “Things still felt normal.”

NewsWatch: These infrastructure stocks could rise up to 41% in a year on Biden’s massive spending plan, analysts say

MarketWatch First Take: Groupon needs a sale — its own