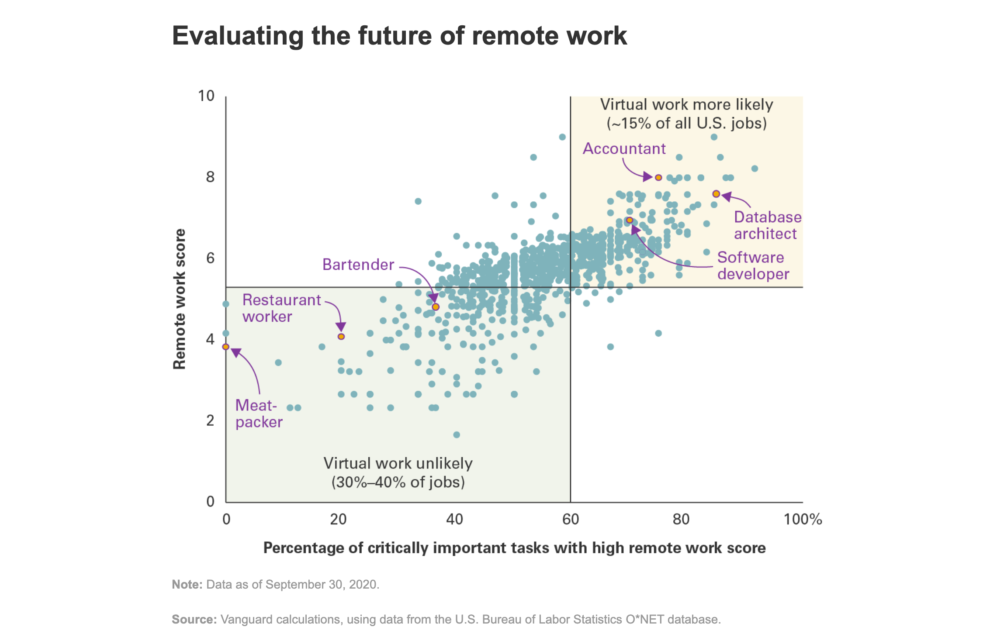 A new Vanguard study quantifies the future of remote work, and looks at the number of potential hybrid jobs. Read More...

Millions of Americans have spent this year working from home, and employers have realized just how smoothly things can get done when they trust their staff to work remotely. But for those fortunate enough to work from home, will COVID-19 have a lasting effect on how we do our jobs? Or will millions of commuters return to cities if and/or when vaccines are made available?

A new study released this week by Vanguard has shed some light on the future of work. “Work-from-home arrangements represent a sharp acceleration of a trend that was already under way before COVID-19,” said Joseph Davis, Vanguard global chief economist. “But the big question for the U.S. economy is how many jobs, and what types, could permanently become remote?”

“For example, if tech workers can just as easily do their jobs from home offices in Toledo or Tulsa or Topeka, do Silicon Valley firms need vast California campuses?” he said. “And what would that mean for businesses that rely on such a concentration of workers and for commuting patterns? What would it mean for real estate prices, both commercial and residential?”

Related:COVID-19 forced working mothers to take time off work — rather than fathers

The Moneyist:My wife and I have 3 kids. I also have 3 kids from a previous marriage. How should we split our house among these 6 children?

“Roughly 15% of all U.S. jobs could be conducted remotely,” Davis found. “It represents potentially over 20 million U.S. workers.” He included a conservative model: a 60% effectiveness threshold was deemed good enough to complete the task in each respective occupation. “A higher threshold would mean that fewer occupations and workers could permanently work remotely,” he added.

In November, long-term unemployed Americans hit 3.9 million, accounting for over a third of the total number of unemployed people in the U.S. Although the overall unemployment rate fell in November, the number of people who were unemployed for 27 weeks or more rose. The labor-force participation rate, which measures how many people are working or looking for a job, also fell.

The U.S. unemployment rate has fallen by 8 percentage points over the past seven months to 6.7%, according to government data, but Scott Ruesterholz, portfolio manager at Insight Investment, a London-based global-asset manager, said, “It will likely take over 12 months to return to 5% unemployment and substantially longer to return to the pre-crisis 3.5% level.”

“This report is a clear reminder that while the U.S. economy continues to recover, the road will be bumpy, especially until the widespread rollout of vaccines,” he said. “This reality underscores the importance of targeted fiscal stimulus to impacted businesses and workers to bridge the economy until a return to normality and limiting permanent scarring.”

Read MarketWatch’s Moneyist advice column on the etiquette and ethics of your financial affairs.

The “best jobs” in America in terms of job satisfaction, salary and job openings are also conducive to remote work. Front-end engineers had an average overall job satisfaction score of 3.9 out of 5 on Glassdoor’s “best jobs” list, making theirs the No. 1 profession for 2020, knocking data scientists off the No 1 spot. Front-end engineers develop the code that enhances users’ online experience.

Amanda Stansell, senior economic research analyst at Glassdoor, said there’s more competition between tech and non-tech companies for such roles. Google GOOG, +0.36%, Aetna US:AET and Microsoft MSFT, +1.30%  typically hire front-end engineers, but they are also increasingly in demand by any company that relies on a website for its business.

In its own research, Glassdoor looked at perks that lead to an increase in employee satisfaction. That analysis concluded that flexibility played a key role. While workplace health insurance was the No. 1 perk, it was followed by generous paid vacation time and paid time off, pension plans, 401(k) plans, retirement plans, dental insurance and maternity and paternity leave.

Don’t miss: ‘The atmosphere soured hard and early.’ Meghan and Harry’s #Megxit will make them rich beyond their wildest dreams

Has COVID-19 made life insurance more expensive? These researchers say they have the answer
IPO Outlook: Popular E-commerce Company Wish, Plus Offerings From A Personal Loan Disruptor And A Biotech Firm
Comment

A warning for Atlanta and other potential hot spots: Pollution is linked to higher COVID-19 deaths

Mutual Funds Weekly: How to drive Tesla stock — plus other top investing tips