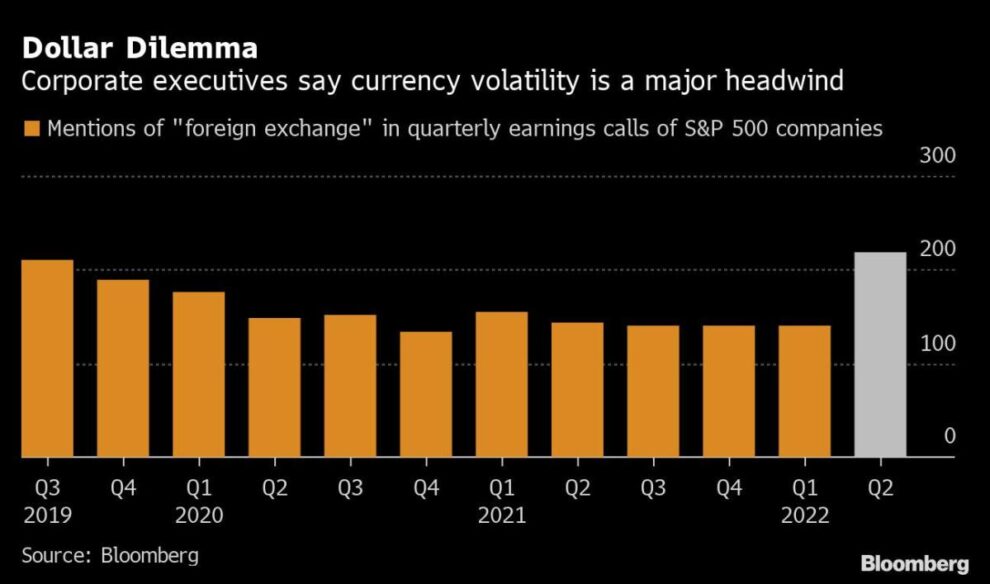 (Bloomberg) -- Among the cavalcade of challenges facing corporate America, from historically high inflation to the lingering effects of the pandemic, a familiar lament is beginning to dominate C-suite conversations once again: the meteoric ascent of the dollar.Most Read from BloombergChina Alarms US With Private Warnings to Avoid Taiwan StraitGlobal Rout Deepens as Outsized Rate Hike in Play: Markets WrapBitcoin Tumbles to 18-Month Low as US Inflation Impact SpreadsChina Is Walking Back Virus Lo Read More... 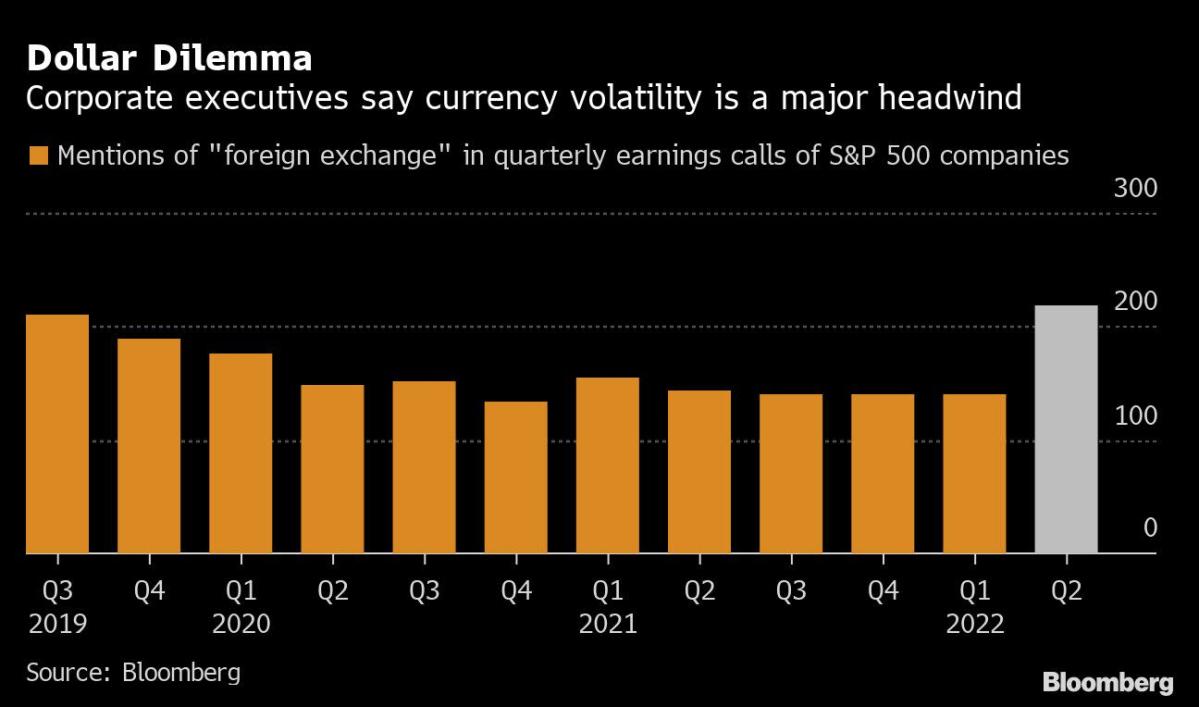 (Bloomberg) — Among the cavalcade of challenges facing corporate America, from historically high inflation to the lingering effects of the pandemic, a familiar lament is beginning to dominate C-suite conversations once again: the meteoric ascent of the dollar.

Microsoft Corp. became the latest US firm to make headlines for pointing a finger at the surging greenback, accusing it of eating away at its profits in a rare mid-season earnings forecast revision. The US currency soared on Monday to the highest since April 2020, driven by jumping Treasury yields and expectations for the Fed to deliver bigger rate hikes in coming months.

After years of relatively serene global currency markets, foreign-exchange volatility has come roaring back as central banks around the world look to rein in runaway inflation by raising interest rates. With the Federal Reserve leading the charge, the dollar is off to its best start to a year since 2010, extending its gains over the past 12 months to more than 22% versus the yen and 15% against the euro.

For many companies dependent on overseas sales, it’s set to be a gut punch to their bottom lines. That’s because a stronger greenback lessens the value of their foreign revenue when translated back into dollars. It also makes their products less competitive as prices rise in local currency terms, reducing demand.

“There’s concern about the dollar pricing US companies out of the global marketplace, which is very significant when you consider some of our largest cap companies have the greatest bulk of their businesses overseas, or at least sizable amounts,” said Jim Paulsen, chief investment strategist at Leuthold Weeden Capital Management in Minneapolis.

To be sure, earnings revisions based on foreign-exchange fluctuations are often brushed off by investors more concerned with operational performance. In fact some market watchers say currency volatility is too often used as a convenient veil for a poor quarter.

Yet it’s clear that this go around, the stronger dollar is having a tangible impact on corporate results.

About 35% of US firms have enough exposure overseas that a stronger greenback materially hurts their earnings per share, according to Gina Martin Adams, director of equity strategy at Bloomberg Intelligence.

These include many of the country’s largest technology companies, which have complex global operations and can generate more than a third of their sales outside the US.

Salesforce, the leader in cloud-based customer management software, recently doubled its expected revenue hit for the fiscal year to $600 million on account of the stronger dollar, while still predicting growth of about 20%.

“The dollar might have even had a stronger quarter than we did, which is kind of amazing,” co-Chief Executive Officer Marc Benioff said on the company’s May 31 earnings call. “This is great to be a tourist in Japan, but it’s going to have implications as we roll this revenue up from the Japanese market.”

In fact, references to “foreign exchange” are popping up in earnings calls at the fastest clip in three years, according to a Bloomberg analysis. And “hedging” has been mentioned more than in any quarter since 2016.

A representative for Microsoft directed Bloomberg to the company’s June 2 earnings forecast revision, in which the company predicted a $460 million hit to fourth-quarter revenue from currency fluctuations. A spokesperson for Biogen declined to comment beyond the firm’s May earnings call, in which executives noted that the stronger dollar would result in a revenue hit of about $120 million after hedging.

Costco, which last month said that foreign currency weakness versus the dollar dented third quarter sales by more than 1%, hasn’t made any operational changes despite the increased volatility, Chief Financial Officer Richard Galanti said. A spokesperson for HPE noted that in addition to currency movements, the company’s downward profit forecast earlier this month was also impacted by Russia’s invasion of Ukraine and Covid-19 related disruptions in China.

The Bloomberg dollar spot index, which tracks the greenback against its most commonly traded peers, touched the highest in more than two years last month.

The surge has been particularly acute versus the yen and euro, but also versus the British pound and South Korean won, both of which are off more than 12% versus the greenback over the past year.

Every 8% to 10% jump in the dollar triggers, on average, a roughly 1% hit to US company profits, according to Credit Suisse Group AG.

“The strong dollar is an issue for companies because it makes US products less attractive to foreign buyers,” said Jonathan Golub, chief US equity strategist at Credit Suisse Securities. And “when you translate those earnings back to dollars, you get lower numbers.”

On the flip side, a Credit Suisse basket of US companies that stand to benefit from dollar appreciation — those with domestic sales and foreign currency costs — has outperformed a gauge of firms that tend to suffer by about 5.7% this year through mid May.

While the surging greenback’s toll on stock prices has garnered the lion’s share of attention recently, market watchers are starting to warn of impacts on corporate debt as well.

“We view lower-quality credits with high non-US dollar revenue exposure as vulnerable given unfavorable valuation and demand drivers created by the strong US dollar,” Dominique Toublan, head of US credit strategy at Barclays Plc, wrote in a June 3 report.

Barclays advises reducing exposure to BBB rated corporate bonds of firms such as Leidos Holdings Inc., which gets about 87% of its revenue abroad, and automotive supplier BorgWarner Inc.

“Along with inflation, strength in the dollar has been a notable market dynamic that has shown few signs of abatement,” Toublan said.