Advanced Micro Devices Inc. enters its next earnings report more of a threat to its larger rival Intel Corp. as it has ever been, where the question has become how much market share can the smaller company snatch before the larger one can right its own ship. Read More... 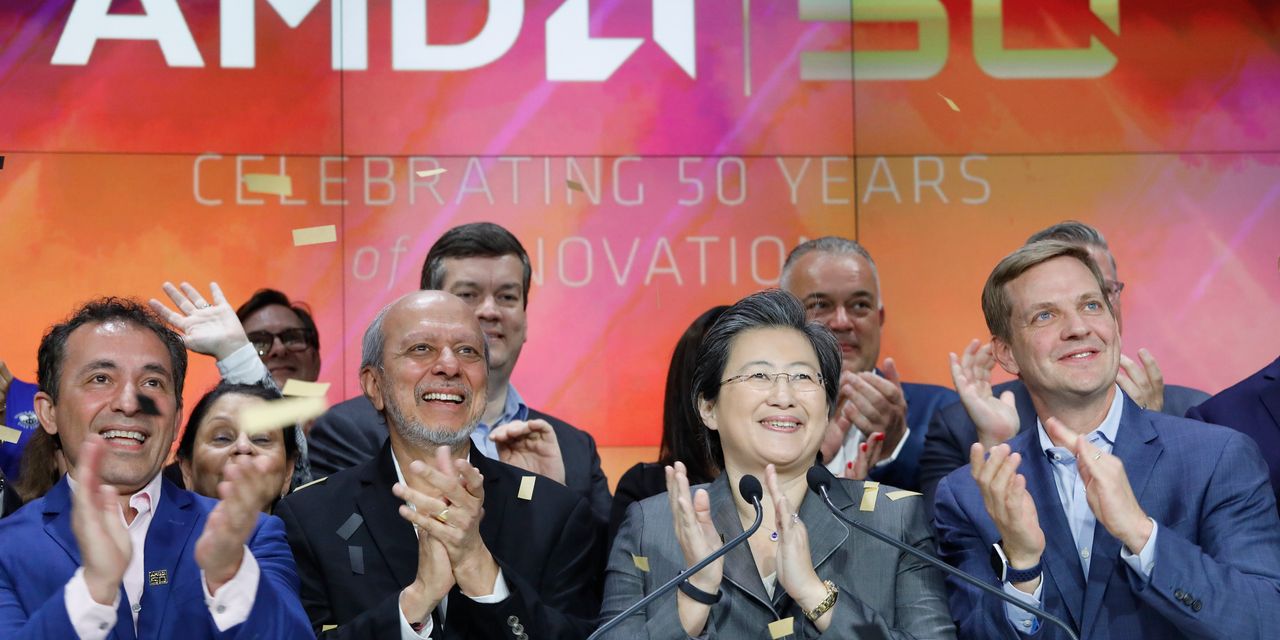 Advanced Micro Devices Inc. has become more of a threat to larger rival Intel Corp. as it has ever been, and the question now is how much more market share can the smaller company snatch before the larger one can right its own ship.

AMD AMD, +1.03% is scheduled to report second-quarter earnings on Tuesday after the close of markets, but its forecast is likely to hold more sway than the results. Both Intel INTC, -5.29% and Texas Instruments Inc. TXN, +2.17% offered weaker-than-expected forecasts in their earnings reports, which eclipsed big earnings beats.

Wall Street, on average, expects AMD to report $1.44 billion in enterprise, embedded, and semi-custom sales — the segment containing data-center and gaming-console chips — nearly triple what the chip maker reported a year ago. The only lack of clarity to those numbers is AMD’s insistence of not breaking out data-center sales from gaming sales.

See also: Intel appears to be feeling the competitive heat from AMD

Wall Street’s other concern appears to be how much constraints from silicon wafer supplier Taiwan Semiconductor Manufacturing Co.’s TSM, +0.20% will hamper AMD’s sales of finished product.

Caso said those supply constraints and potential share gains will help insulate AMD from concerns that PC sales are peaking and will soon slow down.

At last check, the company progressed one step closer to closing its $35 billion acquisition of Xilinx Inc. XLNX, +1.02%, as U.K. and EU regulators signed off on the deal in late June, following the approval of both companies’ shareholders in April. All that’s left is for regulators in China to sign off on the deal. Additionally, over the quarter, AMD announced its first major stock buyback plan in the company’s history at $4 billion, compared with the piecemeal repurchase of $100 million over the years.

Read: The chip crunch marches on, but one sector could be in store for relief

Earnings: Of the 33 analysts surveyed by FactSet, AMD on average is expected to post adjusted earnings of 54 cents a share, up from 46 cents a share expected at the beginning of the quarter and 18 cents a share reported in the year-ago period. Estimize, a software platform that crowdsources estimates from hedge-fund executives, brokerages, buy-side analysts and others, calls for earnings of 59 cents a share.

Revenue: AMD predicted second-quarter sales between $3.5 billion and $3.7 billion in April, while analysts on average had forecast revenue of $3.23 billion at the time. Now, 30 analysts, on average, expect revenue of $3.62 billion, up from the $1.93 billion reported in the year-ago quarter. Estimize expects revenue of $3.72 billion.

Stock movement: While AMD earnings and sales have topped Wall Street estimates over the past four quarterly reports, shares haven’t turned in a gain the next day since a year ago, when the stock popped nearly 13%.

“While AMD’s stock has stagnated a bit due to concerns over potential constraints, worries over peaking PCs, higher spending, and a potentially more aggressive Intel, the company’s trajectory and presence continues to appear strong,” Rasgon, who has a market perform rating and $95 price target on AMD, wrote.

“While we wait to see if they can make further top line improvements from here, it remains imperative for AMD to continue capitalizing as Intel enters transition; we believe showing they can maintain inflection especially on server share (which is now showing acceleration as Milan goes head-to-head with Intel’s delayed Ice Lake) would be an important further signpost,” the Bernstein analyst said.

“Our checks indicate that its 3rd generation server CPU, Milan, is poised to take material share from Intel in 2H21, and that its 4th gen server CPU, Genoa, will be particularly differentiated by its high core count,” Lipacis said.

Cowen analyst Matthew Ramsay said that AMD has a good two years to capitalize not only on Intel’s turnaround but to gain momentum while Nvidia works to bring its new CPU to market.

“Even after raising 2021 growth guidance to 50% from 37% on the 1Q21 earnings call, we see upside to numbers from continued PC chip sales momentum and upside to both hyperscale and enterprise server shipments helped in 4Q/1Q by Intel’s latest Sapphire Rapids delay,” Ramsay said. “While the slight Sapphire delay is not overly concerning with initial shipments slipping from 4Q21 to 1Q22, we do believe it could drive some incremental shipments from AMD to hyperscale customers, and we now forecast datacenter CPU revenue up Q/Q in 4Q21.”

Of the 38 analysts who cover AMD, 22 have buy or overweight ratings, 14 have hold ratings and two have sell ratings, with an average price target of $106.73.

In One Chart: Cost of the Olympics: How the 2020 Tokyo Games are one of the most expensive ever
Judge grants U.S. FTC more time to file amended complaint against Facebook
Comment