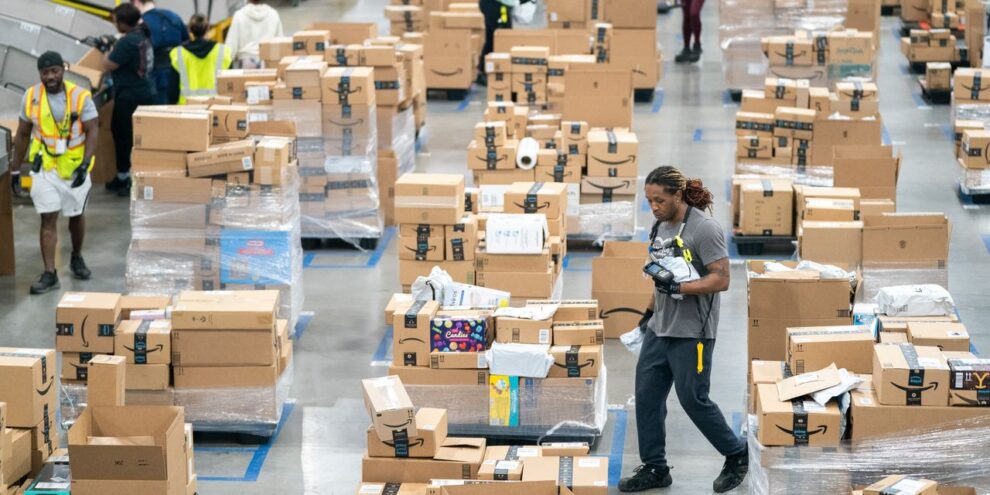 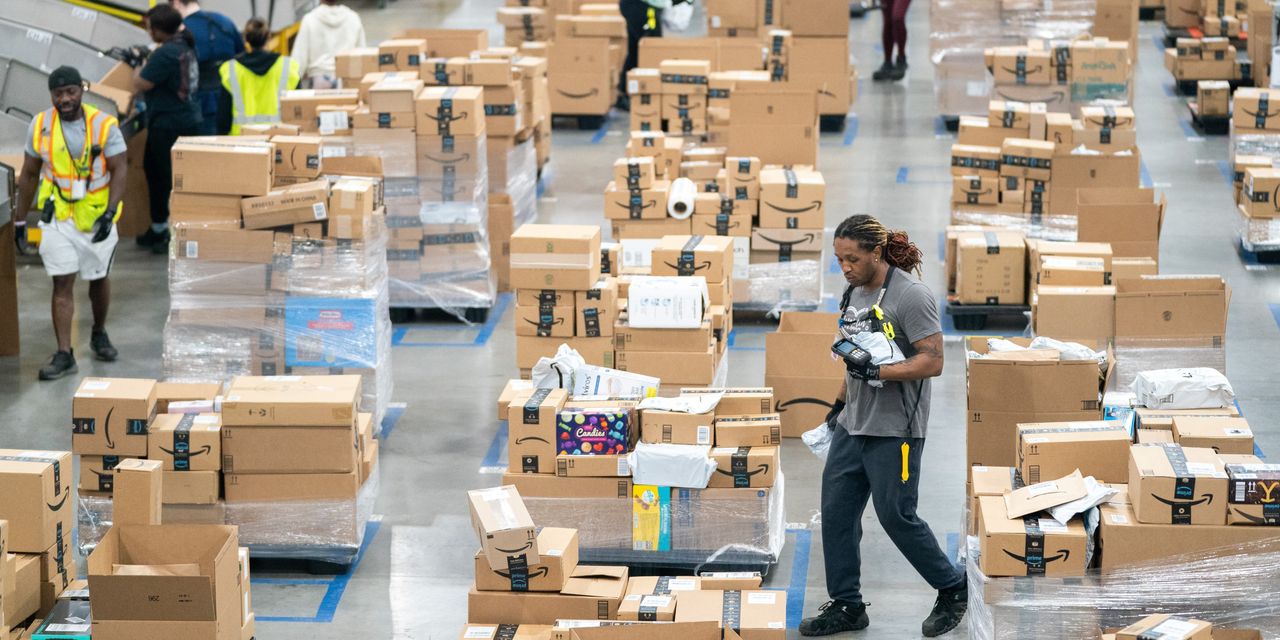 Amazon AMZN, -4.06% executives guided for fourth-quarter operating profit of break-even to $4 billion and holiday sales of $140 billion to $148 billion, while analysts on average were expecting operating income of $5.05 billion on revenue of $155.09 billion, according to FactSet. AWS sales of $20.54 billion grew 27.5% from the year before, the lowest growth rate for the pioneering cloud-computing product in records dating back to the beginning of 2014, and lower than analysts’ average estimate of $21.2 billion; AWS operating income of $5.4 billion handily missed analysts’ average estimate of $6.37 billion, according to FactSet.

“As the third quarter progressed, we saw moderating sales growth across many of our businesses, as well as increased foreign-currency headwinds … and we expect these impacts to persist throughout the fourth quarter,” Chief Financial Officer Brian Olsavsky said in a conference call Thursday afternoon. “As we have done in similar times in our history we are also taking action to tighten our belt, including pausing hiring in certain businesses and winding down products and services where we believe our resources are better spent elsewhere.”

Shares dove 15% to 20% in after-hours trading immediately following the release of the results, after closing with a 4.1% decline at $110.96, but settled near a decline of about 14% later in the extended trading period. After-hours prices could chop roughly $150 billion from Amazon’s market capitalization and send it lower than $1 trillion for the first time since March 2020 if they were to persist through Friday’s regular trading session, according to FactSet.

Amazon reported its first quarterly profit of the year for the third quarter, and easily beat analysts’ expectations for the back-to-school period that included the company’s first Prime Day of the year, but earnings still declined from last year. Executives reported third-quarter profit of $2.87 billion, or 28 cents a share, down from 31 cents a share in the year-ago quarter after adjusting for Amazon’s 20-to-1 stock split.

Revenue grew to $127.1 billion from $110.8 billion, in the middle of executives’ forecast for $125 billion to $130 billion but slightly missing analysts’ expectations; executives said revenue would have been $5 billion higher without the effects of the strengthening dollar. Analysts on average expected earnings of 22 cents a share on sales of $127.39 billion, according to FactSet.

“There is obviously a lot happening in the macroeconomic environment, and we’ll balance our investments to be more streamlined without compromising our key long-term, strategic bets,” Chief Executive Andy Jassy said in a statement. “What won’t change is our maniacal focus on the customer experience, and we feel confident that we’re ready to deliver a great experience for customers this holiday shopping season.”

Amazon had reported quarterly losses through the first half of the year, largely because of a rapid post-IPO decline in one of its investments, Rivian Automotive Inc. RIVN, +0.17%. But the Seattle-based company has also been looking to cut costs after spending wildly during the first two years of the COVID-19 pandemic to keep up with spiking demand for its online store and Amazon Web Services cloud-computing products.

Amazon’s stock has suffered as it faces comparisons to the headier days of last year, and will do so again in the holiday season, when it faces a comparison with a nearly $12 billion profit from its Rivian investment, which has declined more than 50% from its IPO price and stands at roughly one-fifth its peak post-IPO price.

There were thoughts that Amazon would be cautious with its holiday forecast, as its attempts to cut costs run into the need to keep its giant logistics operation running smoothly. The company is looking to hire 150,000 workers to get through the holiday season, and recently announced increased pay for fulfillment workers.

Amazon’s e-commerce operations were boosted in the third quarter by the company’s annual Prime Day event in July, and the company tried to replicate the event in October, but analysts saw the second Prime Day as less successful and potentially a sign of weakness.

“We see Amazon’s decision to hold two Prime Day sales in one calendar year as a red flag for weak e-commerce sales; consistent with retailers, in general, holding more sales when their sales are under pressure,” D.A. Davidson analyst Tom Forte wrote in a preview of Amazon’s report.

In the third quarter — with back-to-school sales and the first Prime Day event — quarterly retail sales in North America hit $78.84 billion, while overseas revenue totaled $27.72 billion. Analysts on average were expecting $77.24 billion and $29 billion respectively, according to FactSet. Sales in both locations were unprofitable from an operating perspective for the fourth consecutive quarter, losing a total of $2.88 billion.

Amazon’s profit largely comes from the fat margins of its AWS cloud-computing offering, but there have been concerns about growth leveling off for cloud after rival Microsoft Corp. MSFT, -1.98% reported a deceleration earlier this week and guided for a further decline in growth in the fourth quarter. AWS did provide enough profit in the third quarter to overcome the losses in e-commerce, but the result was the lowest quarterly operating income for Amazon overall since the first quarter of 2018, according to FactSet records.

Opinion: The cloud boom is coming back to Earth, and that could be scary for tech stocks

“The ongoing macroeconomic uncertainties have seen an uptick in AWS customers focused on controlling costs and we are proactively working to help customers cost-optimize just as we have done throughout our history, especially in periods of economic uncertainty,” Olsavsky said in Thursday’s conference call, before adding that revenue growth dipped to the mid-20s late in the period from an overall rate of 27.5% for the quarter.

“So carry that forecast to the fourth quarter, we are not sure how it’s going to play out, but that’s generally our assumption,” he said, suggesting that Amazon expects the AWS revenue-growth rate to decline again in the fourth quarter.

Amazon’s other higher-margin business is advertising, which has grown strongly in recent years as companies seeking to sell products on Amazon pay the company to list their products higher when consumers search for them on the e-commerce platform. Amazon reported third-quarter advertising revenue of $9.55 billion, up from $7.61 billion a year ago and topping the average analysts estimate of $9.48 billion.