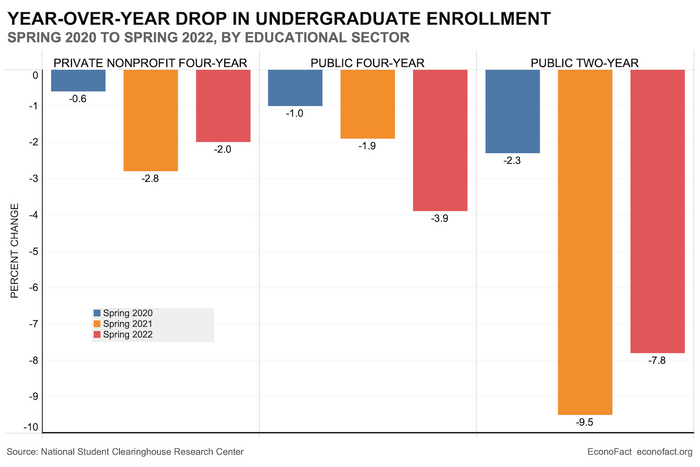 However, applications for financial aid and for admission for next fall are up, especially from areas with many lower-income families and students of color Read More...

Undergraduate enrollment at U.S. postsecondary education institutions declined 4.7% in spring 2022 relative to the same time a year earlier, according to the National Student Clearinghouse Research Center. While the rate of decline was somewhat smaller than the 4.9% annual reduction seen in spring 2021, the 2022 decline was worse than many expected given vaccine availability and trends toward more normal college operations—changes that some hoped marked the beginning of pandemic recovery.

The spring 2022 data show that enrollment weakness continued to be particularly pronounced among two-year programs. However, traditional-age and male enrollments held up better than those of older students and women, reversing patterns seen earlier in the pandemic. The continued drop in undergraduate enrollment compounds challenges already facing many postsecondary institutions due to reduced birth rates and shifting demographics.

“ It may be that labor shortages and corresponding strong wages have pulled older students out of school. ”

Undergraduate enrollment in spring 2022 was disappointingly weak, though some segments of the postsecondary education market experienced greater losses than others. Notably, the number of associate degree-seeking students fell 8.3% while the rate of loss in the bachelor’s degree-seeking market was only one third as large. Given this change in student pursuits, public two-year institutions bore a disproportionate share of the enrollment decline (7.8%) while private nonprofit four-year colleges and universities, which grant few associate degrees, saw a loss of only 2% (see chart).

These patterns reinforce those seen throughout the pandemic leading to vastly different cumulative effects by sector. While the pandemic made itself felt in March 2020, spring 2020 enrollment decisions had already been made by that point. Pandemic-induced enrollment losses appeared in the 2020—21 academic year, and spring 2021 undergraduate enrollments stood 4.9% lower than prior-year levels. In that first year of pandemic response, losses were greatest in the two-year sector, which saw enrollment declines of 9.5%. In the same year, undergraduate enrollments fell 1.9% and 2.8% at public and private nonprofit four-year institutions.

The buildup in losses over the two pandemic years has led to vastly different outcomes. Between spring 2020 and spring 2022, enrollments at public two-year colleges are off 16.6% as compared to losses of just 5.8% and 4.7% at public and private nonprofit four-year peers.

“ The pandemic has reduced male enrollments more than female, with much of this effect driven by two-year college experiences. ”

Weakness in spring 2022 enrollment was particularly evident among “nontraditional” students (those 25 years old and older), reversing the pattern seen in the prior year. Enrollments (undergraduate and graduate) among those 25 years old and older fell 5.8% between spring 2021 and spring 2022—almost twice the rate of decline seen among those 24 years old and younger. This pattern of relative weakness in the nontraditional market was reported by all subsectors of higher education. A year before, the pattern was exactly reversed with nontraditional student enrollments falling only 1.2% as compared to a 4.7% loss among traditional-aged students.

When the two years are combined, losses in both groups have been within 1 percentage point of each other since the start of the pandemic in spring 2020. The reasons for the different patterns between 2021 and 2022 remain subjects for future research. It may be that labor shortages and corresponding strong wages have pulled older students out of school. Alternatively, it may be that younger students susceptible to withdrawal from higher education had already left in 2021 such that what we see in 2022 is simply older students catching up to the same choices as seen in younger cohorts.

Declining enrollments reported in spring 2022 were particularly evident among women, also a reversal of enrollment patterns of the prior year. Spring 2022 enrollments (undergraduate and graduate) were 4.6% lower among women as compared to a 3.3% decline among men. This result stands in contrast to the enrollment outcomes in spring 2021 when women saw a decline of just 2.0%, less than half of the 5.5% loss experienced among men.

Again, research has not identified causes for these gender differences. A few clues seem important. First, employment losses were greater among women than men in the early months of the recession—possibly an influence on spring 2021 enrollments. Second, the relative decline of women in spring 2022 is entirely accounted for by enrollments at public two-year institutions; enrollments by men and women at four-year institutions both fell by 2.8%. Both of these facts suggest relative ebbs and flows in labor markets may explain enrollment impacts.

In total, the pandemic has reduced male enrollments more than female, with much of this effect driven by two-year college experiences. Economists Diane Schanzenbach and Sarah Turner estimate that nearly all of the gender disparity in two-year college enrollment between the fall of 2019 and the fall of 2020 is explained by disproportionate enrollment among men in degree programs that involve “’hands on’ experiential learning,” such as welding or automotive repair and maintenance—which were heavily affected by pandemic mitigation policies such as reduced capacity in instructional spaces due to social distancing requirements and frequent deep cleaning of shared spaces.

Application data offer hope for an enrollment rally in fall 2022. Applications for federal financial aid (FAFSA) rebounded this spring to equal those seen prior to the 2019—20 academic year. FAFSA application growth has been particularly strong in school districts with lower incomes and higher shares of students of color—groups which had seen larger enrollment declines earlier in the pandemic. This federal aid application data is consistent with patterns reported by the Common App (an application service used by almost 1,000 public and private colleges and universities from throughout the United States). Through mid-March 2022, the number of unique first-year Common App applicants was up 7.5% over the prior year with disproportionate gains among applicants who are underrepresented minorities, first-generation, or application fee-waiver recipients.

Despite more than $75 billion in federal pandemic relief, higher education did not pass through the pandemic unscathed. Inflation-adjusted tuition and fees have fallen in the past two years, and with inflation rates exceeding 8% per year, it seems likely these trends will continue. Depressed fees in combination with continued enrollment weakness threaten tuition and fee revenues which make up the largest source of revenue for public and private nonprofit four-year institutions.

The urgency of pandemic recovery is made greater by two ongoing trends: declining fertility since the Great Recession, which will soon shrink prospective student pools and a decline in matriculation among international students (a trend that was amplified by the pandemic but began in 2016—17). With additional pandemic aid to higher education unlikely at this point, colleges and universities will suffer financial hardship if enrollment declines don’t reverse in the 2022—23 academic year.

Nathan Grawe is an economics professor at Carleton College. His research focuses on how family background shapes educational and employment outcomes.

This commentary was originally published by Econofact.org—The Pandemic Drop in Undergraduate Enrollment