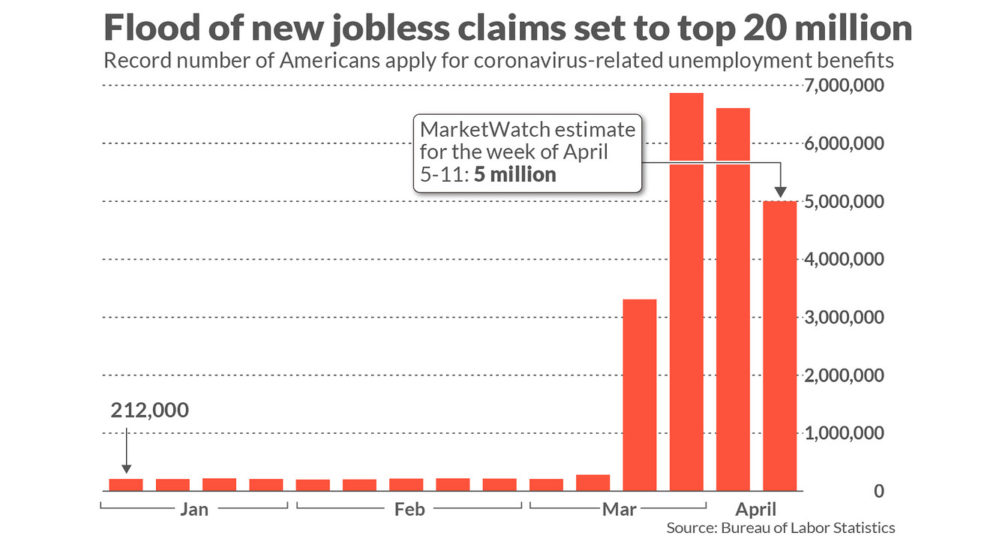 Some 5 million Americans likely applied for jobless benefits for the third week in a row in mid-April as the coronavirus took an even bigger bite out of the U.S. economy, pushing the unemployment rate to around 15% unofficially. Read More... 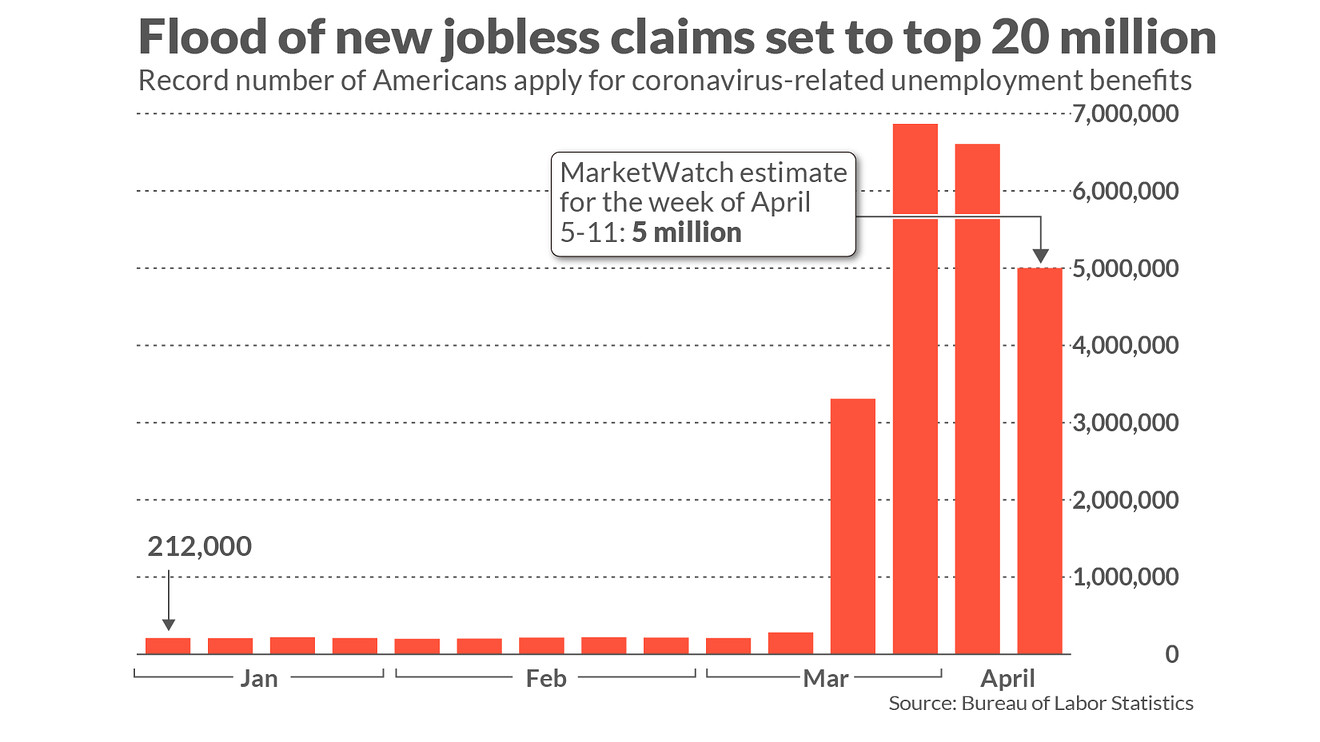 Some 5 million Americans likely applied for jobless benefits for the third week in a row in mid-April as the coronavirus outbreak took an even bigger bite out of the U.S. economy, pushing the unemployment rate to around 15% unofficially.

Nearly 17 million people have already filed new jobless claims since a wave of state-ordered lockdowns starting in mid-March forced most businesses to close or operate with skeleton staff.

Wall Street DJIA, -1.86% economists estimate an additional 5 million jobless workers applied for benefits in the seven-day period that ended April 11, swelling the ranks of the newly unemployed in the past month to 22 million.

They’ve joined the roughly 1.7 million people who were collecting jobless benefits before the crisis engulfed the U.S. and rest of the world.

Several firms such as Barclays have been closely monitoring reports from the 50 states, and they see little likelihood of a big dropoff in new claims. Many states are still struggling to process the deluge in jobless applications.

“Although we forecast the number of new claims fell from the prior week, we think that the overall labor market continues to deteriorate considerably in April,” the firm’s economists wrote.

Also:Being furloughed beats layoffs: What it means for millions of now jobless workers

A back-of-the-envelope calculation suggests the unemployment rate has jumped to a post-World War II record of almost 15%, based on the surge in jobless claims over the past month.

Even then, the official figures probably understate how many people have stopped working.

An indeterminate number of employees are still getting paid even though they’ve been sent home. The federal government’s huge $2.2 trillion rescue package will pay airlines and small businesses to hold employees on the payroll for a few months, keeping the official jobless rate artificially lower.

Economists at Goldman Sachs predict the official unemployment rate will top off around 15%.

“Job losses have been larger than expected, but fewer job losers have been counted in the headline unemployment rate,” they told clients in a new research note.

RBC Capital Markets also expects the official unemployment rate to settle around 15% or slightly higher by the end of April.

Read:Big increase in jobless benefits to give millions of laid-off workers higher pay .

The jobless rate undoubtedly would have risen much higher, probably topping 20% and perhaps even exceeding Great Depression levels, if the federal government hadn’t rushed to the rescue.

No official data exists for unemployment back then, but economic historians estimate it rose to as high as 25% in 1933.

Outside the Box: Handing money to small businesses isn’t enough to get Americans back to work quickly

In a sea of red, value stocks bleeding heavily