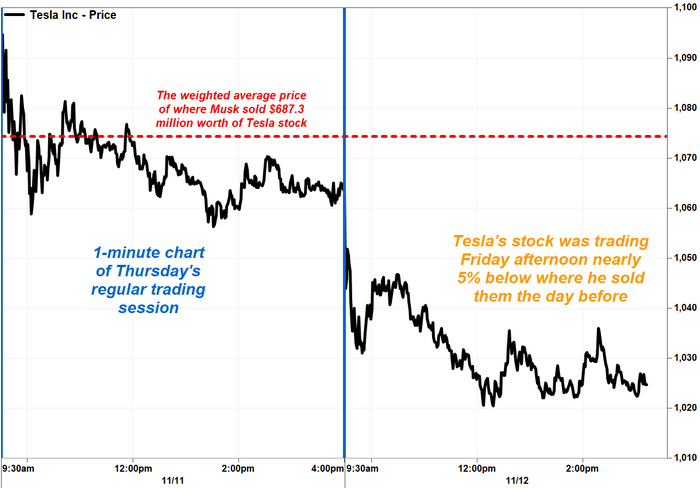 Billionaire Elon Musk sold nearly $2 billion in Tesla Inc. stock on Thursday and Friday for a roughly $7 billion total on the week, which happened to be the worst for Tesla stock in more than a year. Read More...

Billionaire Elon Musk sold nearly $2 billion in Tesla Inc. stock on Thursday and Friday for a roughly $7 billion total on the week, which happened to be the worst for Tesla stock in more than a year.

The world’s richest man asked his Twitter followers last week if he should sell 10% of his 170 million-plus shares, and the answer was yes. After selling about 6.3 million shares this week, Musk would still not be halfway to that goal, and would only be less than a third of the way there if he does not count his Monday sales, which were from options he exercised and made by a predetermined plan in order to pay the taxes on those options.

Tesla stock had its worst week since the markets swooned at the beginning of the COVID-19 pandemic in March 2020; three weeks in February and March of last year are the only weeks worse than the one Tesla just had, adjusted for stock splits. Shares declined 15.4% in total on the week, snapping a streak of 11 straight weekly gains.

The weighted average price of the 44 sale transactions recorded in two separate filings was $1,074.343, according to a MarketWatch calculation.

The filings show Musk was the indirect owner of the shares sold, as trustee of the Elon Musk Revocable Trust.

After the weekly sales, the filings say Musk is still indirect owner of 166,285,682 shares, valued at $171.8 billion at current prices. Tesla ended the week with a market capitalization of $1.04 trillion, enough to make it the fifth most valuable U.S. company.

3 Stocks to Fall in Love With This Valentine’s Day

The 10 Most Important Numbers in Canopy Growth's Fourth-Quarter Report

3 Dividend Stocks to Bankroll Your Retirement