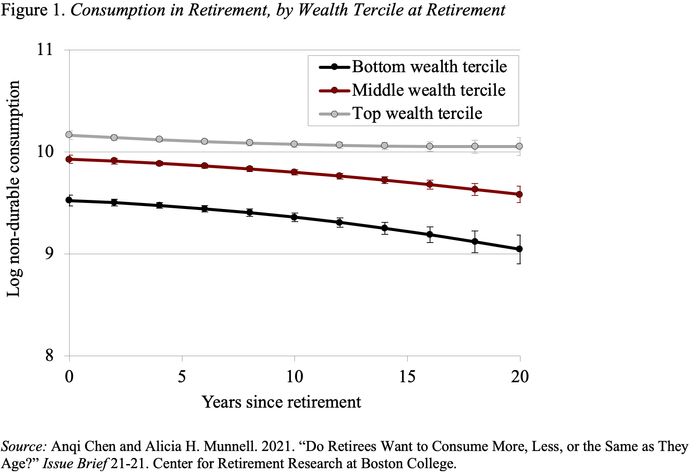 It matters, and the answer depends on wealth, health and life expectancy Read More...
List: The Top 50 Dividend Stocks

Whether households prefer a constant, increasing, or decreasing path of consumption in retirement has important implications for our understanding of retirement adequacy.

If people want steady consumption, they need more assets at retirement than if they plan to let their consumption decline over time.

Read: Want to be a better investor? Sign up for our How to Invest Series

Economists’ life-cycle model assumes that forward-looking retirees smooth their marginal utility of consumption over their lifespan. Under certain conditions, the model predicts that retirees would prefer constant consumption. This result is intuitive, and financial planners and researchers have often assumed that retirees would like to maintain their preretirement standard of living. In addition, Social Security benefits are based on the premise that people want steady consumption, as benefits are adjusted for inflation.

Read: How much do I need to retire? You tell me

While maintaining steady consumption might seem intuitive, most research has studied the change in consumption right at retirement, finding a sharp postretirement drop as retirees consume less than they did while working, and several studies suggest that retired households decrease their consumption over time.

My colleague Anqi Chen and I were curious about the extent to which patterns varied among households, depending on how much wealth they held and how healthy they were. To satisfy our curiosity, we examined 20 years of consumption data for households in the Health and Retirement Study – a longitudinal survey that interviews a sample of households over age 50 every two years. We found that circumstances matter.

Read: This 66-year-old ended up living in a van 18 years ago. Now, he’s turned his lifestyle into a lucrative video business

The results show that consumption paths are much flatter for households in higher wealth terciles (see Figure 1). That is, those with significant resources maintain their preretirement level of consumption, whereas those with limited resources see a sharper decline in their consumption as they age. Hence, financial constraints appear to be at least partially behind consumption declines in retirement.

And looking just at the top third of households in terms of wealth shows that those households that are both wealthy and healthy have virtually flat consumption (see Figure 3).

In summary, we — like others — found that for the population as a whole, consumption declines over retirement. But we also found that constraints matter: wealthier and healthier households have relatively flat consumption paths. The clear implication is that “preferred” consumption is likely much flatter than observed in the data. That is, people want to keep consumption constant, but cannot achieve that goal because they have not saved enough or health limitations intervene.