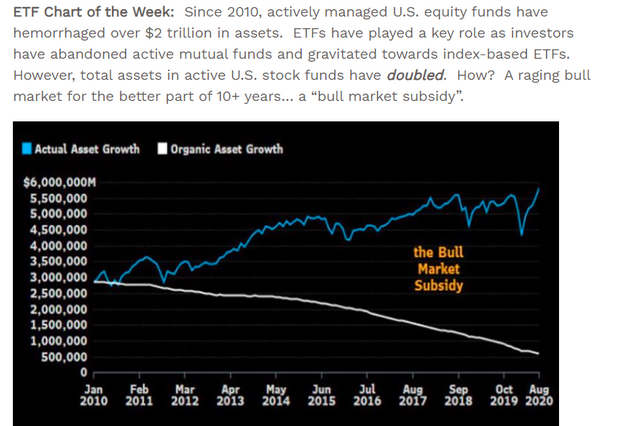 ETF Wrap is a briefing of what investors need to know about the exchange-traded fund sector, including exclusive commentary and interviews on the industry from MarketWatch Read More...

The more things change, the more they stay the same. If you’re trying to figure out why so much of the recent business media you’re reading seems familiar, it’s because we’re stuck. We’re waiting on a fiscal stimulus package like it’s Godot, and we’re pingponging back and forth between exuberance over COVID-19 vaccines and despair over the case counts that continue to grow in the meantime.

Over the past week, investors poured money into travel ETFs, the ultimate “reopening trade,” and into copper funds, perhaps the ultimate economic-expansion play. But by Wednesday, stay-at-home plays were once again winning out over re-opening ones.

With apologies to Yogi Berra, investors are at a fork in the road – and they’re taking it.

Thanks for reading, keep staying safe and healthy, and Happy Hanukkah!

Is the market too saturated with “innovation”-themed ETFs?

The performance – and pedigree – of one fund suggests not. The Innovator Loup Frontier Tech ETF LOUP, -0.37% has gained nearly 50% in the past three months, even as broad tech indexes QQQ, -0.22% are up only about 9%. Loup is the venture-capital firm founded by tech veteran Gene Munster, among others.

But perhaps more compelling is what LOUP doesn’t have. Its overlap with other popular innovative-tech ETFs is minuscule: about 1% of its holdings are also found in Ark Invest’s benchmark Innovation ETF ARKK, -1.06%, and only about 1.8% of its portfolio is also in QQQ, according to a fund analysis.

That’s according to plan, Munster told MarketWatch. “The purpose of the ETF is to find a set of less-known companies weighted for revenue growth. We try to be thoughtful about nonconsensus ideas.”

That strategy gels with Munster’s background and his work at Loup Ventures, which invests in frontier tech companies – but he makes a good case that the present moment calls for a strategy like LOUP’s.

“We spend a lot of time looking at early-stage tech,” Munster said. “We also spend time looking at FANG. What is clear to us is that performance around FANG is understandable but not sustainable. We refer to a fracturing of FANG: Apple may be a good one to continue to own, but some of the stocks are not going to be able to turn in the same performance. The ideal customer for this is an investor who recognizes that what has worked in the past won’t work in the future. We need to define new areas of tech growth.”

LOUP holds only 30 positions, including some well-known names like Pinterest Inc. PINS, -0.71% and Snap Inc., SNAP, +0.34%, as well as some lesser-known ones like Trimble Inc. TRMB, +0.74% It’s also global, with only about 60% of the portfolio coming from the U.S., and rebalanced quarterly.

Like Ark’s Cathie Wood, who thinks humanity is on the cusp of five different innovation platforms at once, for the first time in over a century, Munster also sees us nearing a historical pivot point.

“We measure transformation based on revenue growth. That is one lesson we’ve learned over investing for 20-plus years. In tech, if you’re not growing, you’re not an investible theme.”

Cboe Global Markets CBOE, -1.12% is now the second-largest primary listings venue for exchange-traded products in the U.S., the company said in early December, after what it calls “record gains in new listings” in 2020. In the year to date, Cboe has captured 35% of all new product launches in the market and now lists more than 400 ETPs in the U.S.

Was it “the biggest ETF trade in history?

$7 billion left the Vanguard S&P 500 ETF VOO, -0.13% on Tuesday, according to Bloomberg News. Industry sources, like Eric Balchunas, think it was likely a case of Merrill Lynch advisers rebalancing their model portfolios away from large-cap U.S. stocks.

But just because the herd is thundering, it doesn’t necessarily make a noise. The $7 billion “biggest ETF trade in history” only amounts to a rounding error when compared with the fund’s $174 billion in assets.

Is there an ETF for that?

‘Tis the season… to buy a religion-themed ETF?

There are ETFs for that, as we all know, from “BIBL” to “SPSK,” which stands for sukuk, though there is no Jewish-themed fund – a pity for enterprising newsletter writers in search of a clever peg on the eve of Hanukkah.

CFRA classifies faith-based ETFs as a different flavor of ESG funds, Rosenbluth told MarketWatch. And just like with funds that try to address investor concerns about the environment, social issues, or corporate governance, faith-based ETFs can take either an exclusionary approach, omitting offensive companies, or an inclusionary one that buys stocks that best fit the fund’s ethos.

Rosenbluth gives an example of what that means in practice: The Global X S&P 500 Catholic Values ETF CATH, -0.59% starts with the broad index, then exclude companies that do not adhere to the Socially Responsible Investment Guidelines as outlined by the United States Conference of Catholic Bishops. Its portfolio comprises 455 companies and has performed roughly in line with the S&P 500 this year, up 15%.

That contrasts with the Inspire 100 ETF BIBL, -0.11% which selects 100 of the “most inspiring, biblically aligned U.S. large cap companies,” according to InspireETFs’ website. That selection process has given it a bit of an edge: it’s up nearly 20% in 2020.

Anyone pursuing what they hope is a more righteous investing path probably isn’t chasing pure performance, however. Investors have plowed roughly $228 million into the category through November, according to CFRA data, with $78.8 million flowing to CATH, a little more than double the take for BIBL.

There are similar discrepancies for management fees. CATH charges 29 basis points and the SP Funds Dow Jones Global Sukuk ETF SPSK, -0.10% charges 65. And if you’re holding out for a Jewish-themed fund as eagerly as you await Elijah at Passover, Rosenbluth has some thoughts about that. “I think it’s inevitable,” he said. “There’s white space for that to happen.”

Visual of the week

Walmart CEO: Consumers are stocking up again as coronavirus rages on