Every week we highlight the most timely exchange-traded fund news, from new launches to inflows and performance. Read More... 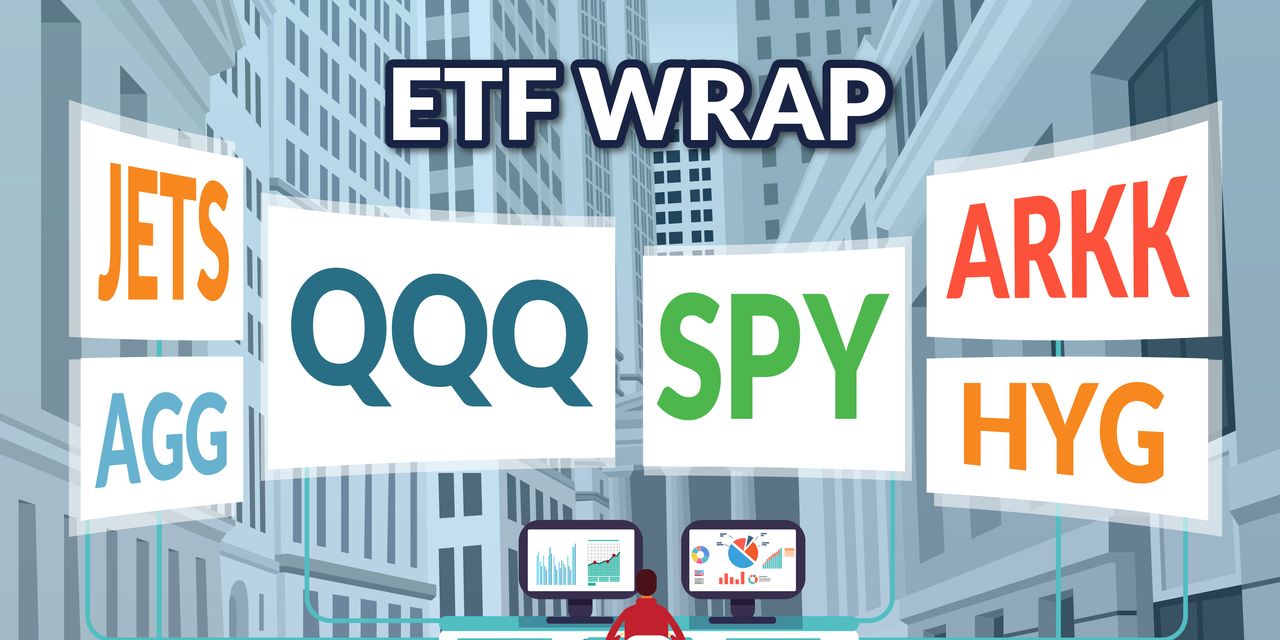 Hello, again: The year’s just about half over an ETFs are already on track to power through a record that was just logged in 2020. We’ll talk about that ridiculous tide of cash pouring into exchange-traded funds this week and highlight the powerful downswing in China-based assets.

As per usual, send tips, or feedback, and find me on Twitter at @mdecambre to tell me what we need to be jumping on. Sign up here for ETF Wrap.

CFRA’s Todd Rosenbluth tells ETF Wrap that with about $480 billion already flowing into exchange-traded funds, that it’s possible the industry will hit a record for net flows, set in 2020 at $504 billion, by the end of July.

Rosenbluth says that a chunk of that cash is pouring into funds like the popular iShares 20+Year Treasury Bond ETF TLT, -1.41%, which is up 2.8% this week and up nearly 8% in the past three months as the 30-year Treasury bond TMUBMUSD30Y, 1.991% is hanging around its lowest yield since February.

Appetite for government debt has been evidenced by the slump in long-term yields, with the 10-year Treasury note yield TMUBMUSD10Y, 1.359% also around February lows.

Vanguard Long-Term Bond ETF BLV, -0.97% also has benefited from the rally in bond prices and the commensurate pull back in yields. That ETF is up 1.8% so far this week and enjoying a three-month rise of over 6% in value.

Of course, wagering on a sustained bond rally may be a fool’s errand, especially with most analysts forecasting that benchmark 10-year yields will be near 2% by the end of 2021, as the Federal Reserve begins to signal its intention to raise interest rates and taper its bond-buying program, which includes the monthly purchase of $80 billion in Treasurys and $40 billion in mortgage-backed securities.

Rapid rotations seem to be behind some of the impressive flows, as investors adjust their portfolios based on the performance of winning versus losing bets and gauge the current cycle of the recovery from the COVID pandemic.

China’s regulator crackdown is knocking growth assets in the People’s Republic and ETFs focused on the region are taking it on the chin.

Regulators in China intensified their crackdown on Chinese internet and technology companies, with officials ordering the removal of the app of Chinese ride-hailing giant Didi Global Inc. DIDI, +7.31%  from the country’s app stores just days after the company listed its shares in the U.S., citing antimonopoly rules.

And regulators in the country are also considering a requirement that would compel companies using certain structures that enable investors to circumvent rules on ownership in China-based entities to seek Beijing’s approval before listing in any major global exchange. Such structures, known as variable interest entities, have been used by companies like Alibaba Group Holding BABA, +3.05%, Tencent Holdings 700, +1.99% and JD.com JD, +3.77%.

ETFs that offer exposure to China’s tech giants were some of the worst performers this week as ETF Wrap’s attached table illustrates. Notable, the popular KraneShares CSI China Internet ETF KWEB, +4.38% was down nearly 11%, which would put it a its worst weekly slide since March.

The good and the bad

As crude-oil prices CL.1, +0.09% have tumbled over 4% so far this week on news that the Organization of the Petroleum Exporting Countries and their allies failed to reach an agreement on production adjustments, some investors see long-term opportunity.

Arnim Holzer, macro and correlation defense strategist at EAB Investment Group, says that ETFs like Utilities Select Sector SPDR Fund XLU, +0.12% may be a good wager to capitalize on what he sees as oversold conditions in crude pegged to concerns of the dissolution of a major oil cartel.

“I see some profit taking on ETFs and crude prices but not sure that knee jerk response makes sense either,” he writes in a Wednesday research note.

“The idea that OPEC would dissolve was overly bearish. I still see tighter production and reasons for the Saudis to make this work. With rates concerns, I see XLU as a solid sector choice for the next few months and we are seeing a strong start to the month,” he said.

CFRA’s Rosenbluth points out that dividend-focused ETFs were popular plays in the first six months of the year and probably warrant another look as we head into a second-half stretch that is already shaping up to be a turbulent ride.

The Dow Jones Industrial Average DJIA, +1.30%, the S&P 500 index SPX, +1.13% and the Nasdaq Composite Index COMP, +0.98% have been trading near records while Treasurys are also rallying, suggesting that something has gotta give at some point.

Dividend ETFs offer some level of income even if stocks don’t continue to rise to all-time highs.

No there isn’t a bitcoin BTCUSD, +0.83% ETF. Don’t expect one until maybe next year, some experts are saying.

Thursday’s swoon in the broader stock market and the run-up in bond prices, pushing yields to February lows, come as outflows and inflows into certain segments of the market appeared to be setting the stage for at least a momentary downturn.

Meanwhile, inflows were heavy in TLT.