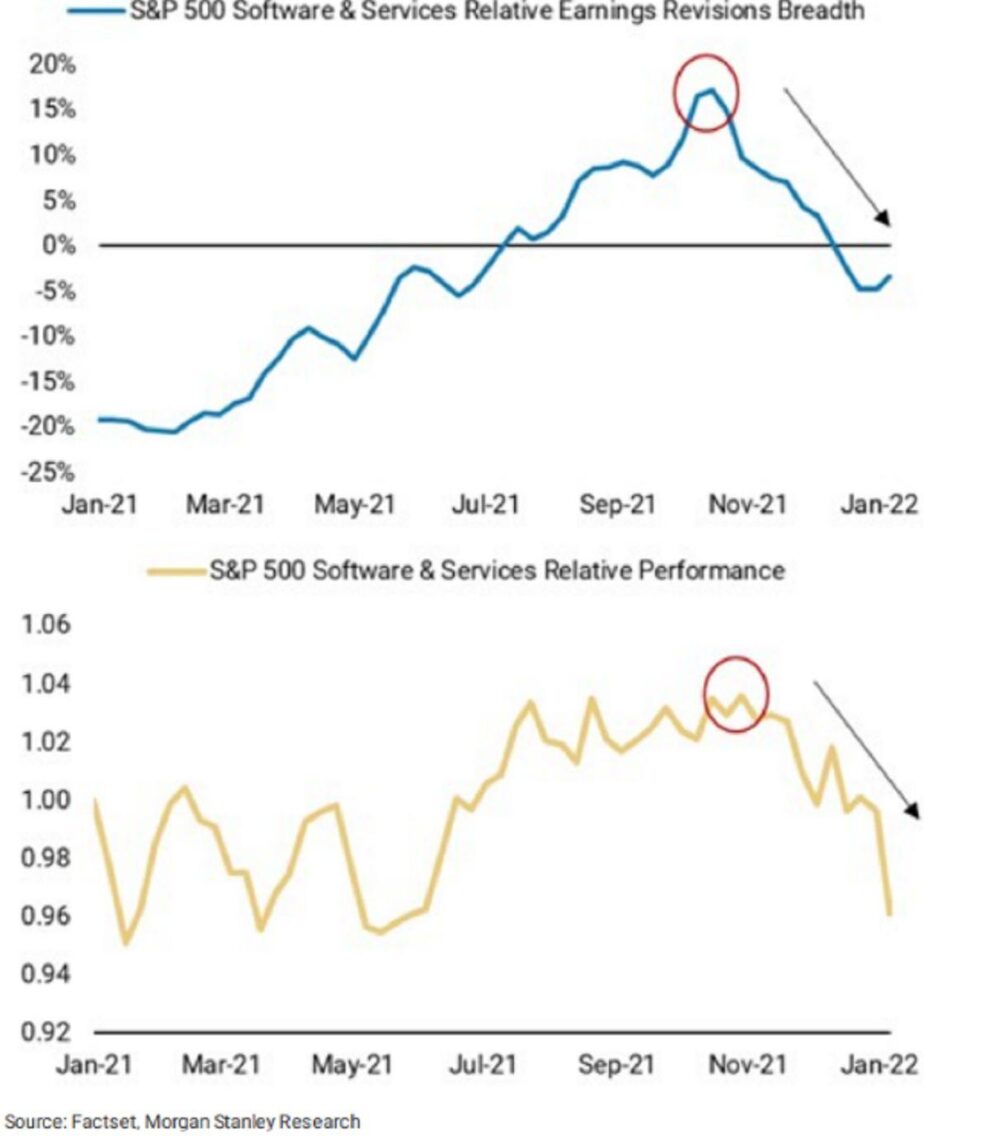 (Bloomberg) -- To see why a leveling of tech valuations has the capacity to terrify even staunch stock bulls, consider the hyper-speculative software makers at the center of the recent equity storm.Most Read from BloombergCannabis Compounds Prevented Covid Infection in Laboratory StudyDirecTV to Drop One America News in Blow to Conservative ChannelCovid Pandemic May Shift to Endemic in 2022, Moderna Chair SaysScientists Discover Gene That Increases Risk of Dying From CovidFrequent Boosters Spur Read More...
List: The Top 50 Dividend Stocks 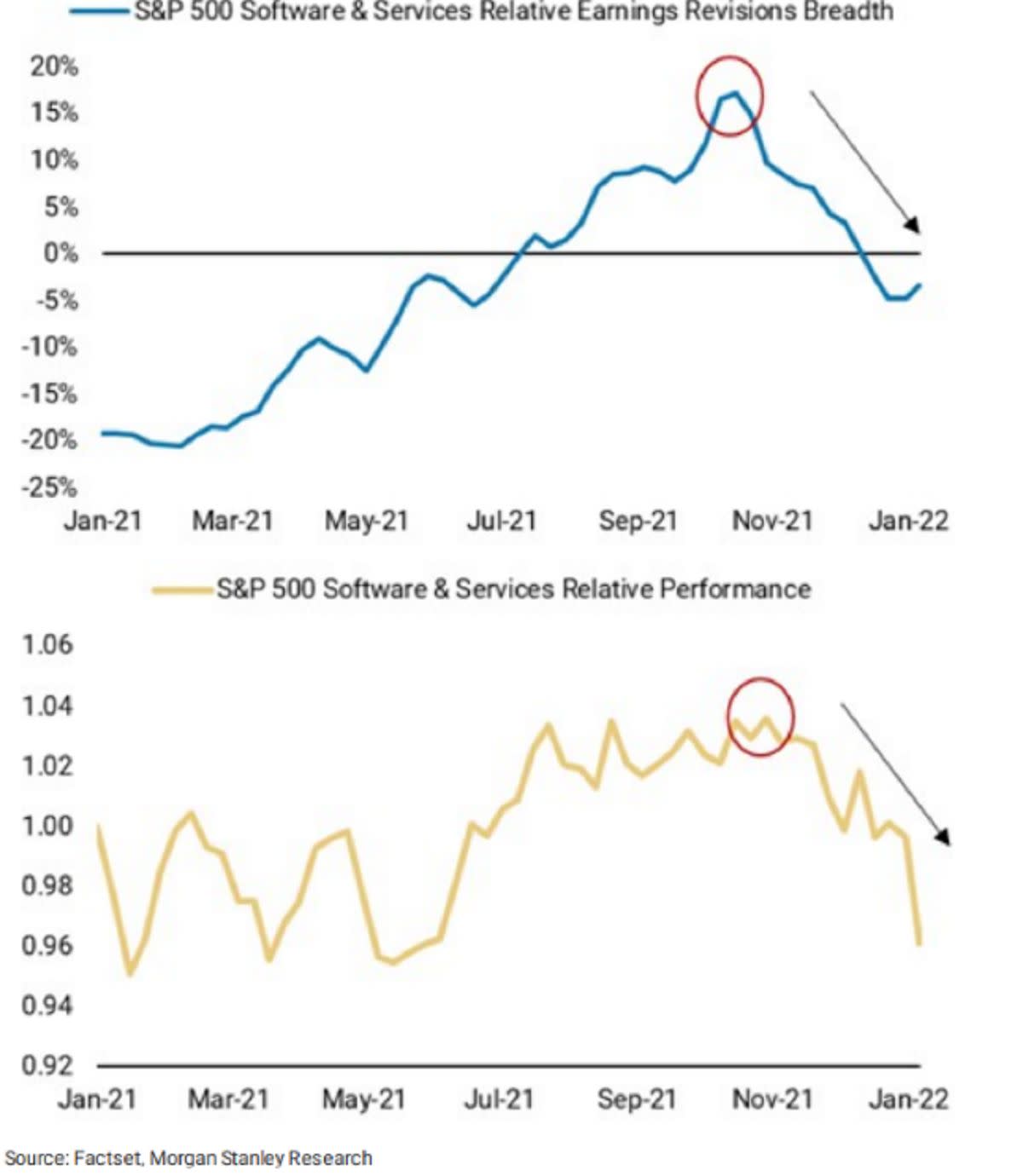 (Bloomberg) — To see why a leveling of tech valuations has the capacity to terrify even staunch stock bulls, consider the hyper-speculative software makers at the center of the recent equity storm.

Those firms have suffered what is by any measure a pummeling in the last few weeks following the hawkish shift by the Federal Reserve. The tech shares lost a third of their value when measured via indexes compiled by Goldman Sachs Group Inc. And yet even with those losses behind them, the group — a basket of companies for whom profitability has in many cases yet to materialize — still trades at 16 times sales. That’s almost three times the multiple of the Nasdaq 100 Index.

More established firms are no bargains, either. The S&P 500 Software & Services Index fetches a price-sales ratio of 9, higher than its already-plump five-year average of 6.8.

Big down days are multiplying in markets amid a surge in bond yields. While bulls may take comfort in earnings expectations that remain intact, a selloff based on a valuations reappraisal could be worse news for investors, given how stretched prices became after three giant years for the Nasdaq 100.

Higher interest rates suggest a healthy economy, but they also have a deflating influence on how future profits are valued. That’s a concern for technology companies that need a long time to produce the profits implied by their market prices.

While veterans of last year’s meme stock frenzy might consider valuations tools quaint, the metrics have proved an accurate predictor of which companies were most vulnerable as interest rates started to rise. It’s a point that may be worth heeding at a time when the Federal Reserve has only just begun a tightening cycle that may take years to complete.

Existing multiples suggest many of these firms will go on to dominate their industries — a scenario that Michael Purves finds difficult to imagine. That some don’t make money at all leaves them particularly vulnerable to a shift in investor taste. And right now, cheap stocks are in favor.

“To pretend that every stock is really exciting and is going to be the next Google is kind of absurd,” said Purves, founder of Tallbacken Capital Advisors. “The Fed is going into this new phase, and the whole excitement of exploding risk assets is going to be a little bit more nuanced.”

The appeal of software makers as a pandemic trade spurred a mad dash into them among professional and retail investors alike, sending their valuations sky high. At the peak last year, expensive technology stocks accounted for almost 20% of hedge funds’ exposure, data compiled by Morgan Stanley’s prime broker showed.

As the selloff began in the speculative corners, hedge-fund managers were forced to unwind their crowded tech bets at a furious pace. Their exposure has since fallen to the lowest level in more than 18 months.

Cathie Wood, whose flagship ARK Innovation ETF (ARKK) has lost almost half its value from its 2021 peak, blamed computer-driven traders for the rout. In a podcast on Jan. 7, she expressed her confidence in investing in companies like Zoom Video Communications Inc., saying industry innovations such as artificial intelligence and blockchain technology are “unstoppable.”

“What’s going on right now is irrational,” Wood said. “Sometimes it can remain irrational, but I do think as we see these earnings reports coming in and the guidance for the first quarter and this fessing up out there into what’s really going on with inventories, that we’re going to see the turn sooner rather than later.”

Mike Wilson, chief U.S. equity strategist at Morgan Stanley, is less sanguine. He pointed out that the recent selloff in software stocks has coincided with a downtrend in the industry’s profit revisions breadth relative to the market. In other words, while rate angst fueled the carnage, a deterioration in earnings sentiment was also a factor.

“Until this reverses, software as an overall cohort should continue to underperform, particularly if rates still head higher,” Wilson wrote in a note to clients Monday. “At this stage, we would not recommend investors try to be too early here given how extreme valuations and positioning remain for the sector.”