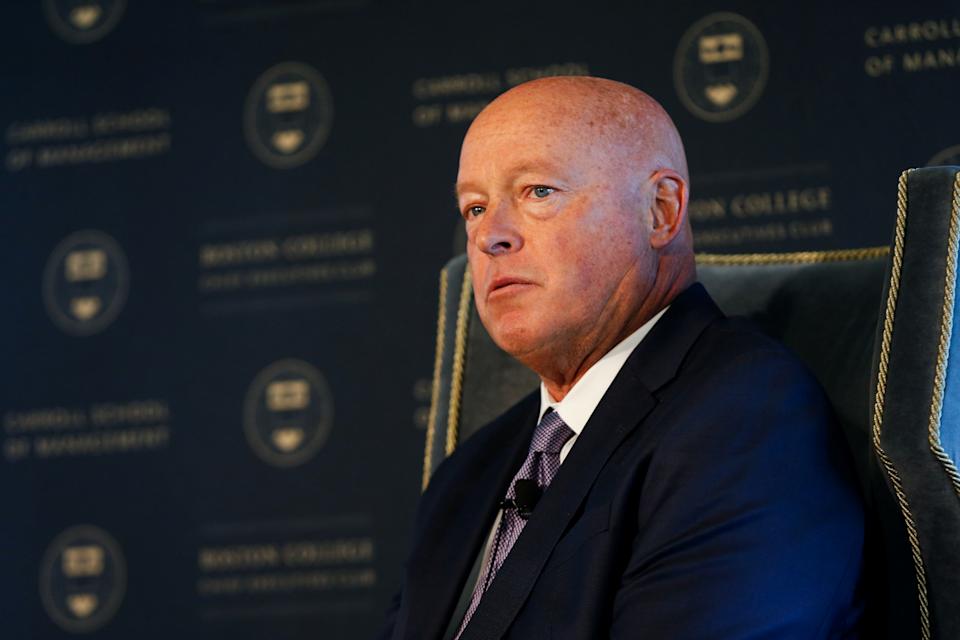 Disney's showdown in Florida continues to weigh on the company and its embattled CEO, Bob Chapek. Read More...

Disney’s (DIS) showdown in Florida continues to weigh on the company and its embattled CEO, Bob Chapek.

On Friday, Governor Ron DeSantis signed into law the bill revoking Disney’s special district status. The move has largely been seen as a response to Disney’s unfavorable reaction to the so-called “Don’t Say Gay” bill.

The controversial bill, which will go into effect on July 1, states, “Classroom instruction by school personnel or third parties on sexual orientation or gender identity may not occur in kindergarten through grade 3 or in a manner that is not age appropriate or developmentally appropriate for students in accordance with state standards.” Parents will be able to sue districts over violations.

Chapek, who initially decided not to speak publicly on the matter, opted to work behind the scenes in an attempt to soften the legislation. It didn’t work.

The executive eventually reversed course following intense backlash. He publicly denounced the act during the company’s annual shareholder meeting on March 9, in addition to directly apologizing to employees in a company memo.

Still, he was criticized for taking a soft stance, and the apology was looked by many at as too little, too late.

“You cannot ride the fence…everything is political.”Lee Cockerell, former EVP of operations at the Walt Disney World Resort

Lee Cockerell, former executive vice president of operations for the Walt Disney World Resort, told Yahoo Finance that CEOs have to “stand up quick” on political issues, adding “politics is just part of life … you can’t avoid it.”

“[Chapek] probably thinks this now and I do too … he should have come out right away. You can’t wait a week to decide how you’re going to respond,” Cockerell said.

“You will have somebody mad at you no matter which way you respond. That’s just the way life is today. You cannot ride the fence. Those days are over and everything is political.”

Cockerell added that Disney’s culture of fostering an inclusive workforce comes with an expectation to “stand up and support everyone” but, at the same time, political battles “are more and more causing issues that probably didn’t even exist.”

“[Chapek] was in trouble any way he went,” the former executive continued.

Currently, Walt Disney World Resort sits on a 40-square mile area known as Reedy Creek, the special tax district that has allowed Disney to operate as a self-governing entity since its inception.

That means Disney controls all of its utilities and infrastructure, sets building codes, operates its own police and fire departments, and can expand and grow whenever it wishes — all without local or state government interference.

Cockerell explained that, under the current structure, Disney World operates like its own city and is able to “get things done very quickly.”

“Disney would not be as the place it is today without this district being able to expedite and get things done quicker,” Cockerell surmised.

Consequently, the district (in addition to providing immense control and flexibility) saves the company tens of millions of dollars every year in certain taxes and fees.

The new ruling, set to go into effect June 2023, will therefore force Disney to pay taxes on those government-funded programs; however, it also means that Reedy Creek’s $997 million worth of bond debt, and some $163 million in annual tax payments, will fall on the citizens of Orlando.

“I am almost positive that the local jurisdictions in Orange County and Osceola County don’t want anything to do with this,” Cockerell said, explaining that he anticipates more meetings between government officials and the media conglomerate down the line.

“Disney will continue to figure it out, like we always do,” Cockerell stated, reiterating his confidence that Disney “will be around for a long, long time, and this will fade out like everything else does.”