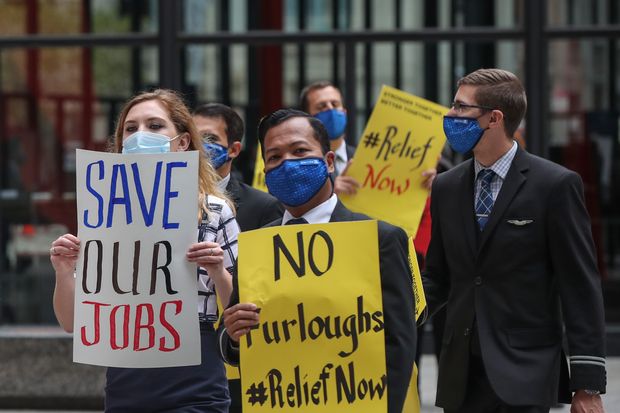 More than 94% of the FEMA disaster-relief money being used to fund the extra benefits has been distributed to make the $300-a-week payments across more than 20 states Read More...

Jobless Americans in more than 21 states are now receiving an extra $300 a week in unemployment benefits under President Donald Trump’s executive order. In some states, the payments will cover six weeks retroactive to Aug. 1, but for unemployed Americans in other states, that won’t be in the case.

Nine states — Alabama, Arizona, Massachusetts, Missouri, New Hampshire, New Mexico, Rhode Island, Texas and Utah  — have finished making the $300 payment to claimants for six weeks, as of Tuesday. Thirty other states have been approved for six weeks’ worth of funds and some are in the process of distributing it.

Then there are states like Florida and Idaho, which have informed unemployment beneficiaries that they won’t be receiving the enhanced benefit for six weeks.

At least eight other states — Arkansas, California, Delaware, Kentucky, New Jersey, Vermont, Wisconsin and Wyoming — are waiting to be approved by the Federal Emergency Management Agency, which oversees the Lost Wage Assistance program, for six weeks’ worth of funds.

But with just 6%, or $2.5 billion, of FEMA’s $44 billion chest remaining to make LWA payments to states, residents of those eight states may not receive the $300 for the entire six weeks.

Why some states aren’t getting six weeks’ worth of funds

On Sept. 14, Florida’s Department of Economic Opportunity said eligible Floridians will receive only four weeks’ worth of the additional $300 benefit. That’s because Florida is no longer eligible to hand out the extra $300, which is being funded by $44 billion in federal disaster relief funds.

States who met the 25% cost-sharing requirement or chipped in $100 extra, including Montana and Kentucky, were initially guaranteed at least three weeks of the $300 add-on benefit once approved by FEMA.

Because unemployment beneficiaries are only eligible for the extra $300 if they receive at least $100 in state-level benefits, nearly 1 million Americans who receive less than $100 a week would be ineligible for the add-on benefit, Eliza Forsythe, a labor economist and assistant professor at the University of Illinois at Urbana-Champaign, calculated.

But more recently, FEMA said that it will “make grant awards to enable requesting states, territories and the District of Columbia to make $300 LWA supplemental wage payments to eligible claimants for a full six weeks.”

The percentage of Floridians receiving state unemployment benefits has continued to decline despite the significant number of new cases of coronavirus reported in the state.

That’s not necessarily a sign of economic recovery in the state. It is likely occurring because Floridians are only eligible for 12 weeks of state unemployment benefits, the shortest span of time among all 50 states.

“Florida’s historically low unemployment rate in 2019, pre COVID-19, set the number of weeks Floridians are eligible for state Reemployment Assistance in 2020 ,” Paige Landrum, a DEO spokesperson said in a statement to MarketWatch on Sept. 14.

At the federal level, Floridians could still be eligible for unemployment benefits through CARES Act funded programs such as Pandemic Emergency Unemployment Compensation or Pandemic Unemployment Assistance.

But those payments won’t count towards the 25% states are required to pay in weekly unemployment claims to qualify for the $300 add-on benefit.

It’s unclear if that’s also why Idaho is distributing the $300 for five weeks instead of six.

“Idaho completed the Lost Wages Program and will not be paying a 6th week,” Craig Shaul, a spokesman at the Idaho Department of Labor, told MarketWatch. Shaul did not respond to multiple requests for comment regarding why the state won’t be paying a sixth week.

In total, 49 states have been approved by FEMA to start making payments. South Dakota was the only state that did not apply.  21 states have either started or completed making the $300 payment to eligible claimants as of Tuesday.

Don’t miss: U.S. jobless claims are rising again — and this state is a big reason for that

Claimants in Alaska, which received FEMA’s approval on Aug. 24, likely won’t receive the $300 benefit for another month due to computer reprogramming challenges, the Alaska Department of Labor and Workforce Development said.

However, the state has been approved for six weeks’ worth of funds from FEMA to make the retroactive payments.

For a while, it seemed as though states which began administering the $300 add-on benefits quickest would have access to FEMA’s finite funds for a longer period of time than states like Alaska, said Michele Evermore, a policy expert at the National Employment Law Project, a nonprofit group that advocates for low-wage workers.

That’s why “FEMA had to stop payment in some of the states that have been faster to pay benefits to make sure that the distribution of the benefits is equal across states,” Evermore said.

Other states, including California, which started distributing the $300 benefit on Sept. 7, said it only received funding for five weeks.

The state is “awaiting word from the federal government as to whether funding will be available and approved for a final sixth week of LWA payments in California for those who received a benefit payment for the week ending September 5th,” a spokesperson from California’s Employment Devlopment Department told MarketWatch.

Meanwhile Vermont is awaiting FEMA’s approval for three more weeks of funds for the LWA program.

“At this time, the grant award ($35.8 million) will cover the first three weeks of the LWA program, retroactive to the benefit week ending August 1, 2020,” reads a Sept. 18 statement from the state’s Department of Labor.

Representatives from state workforce departments in Arkansas, Delaware, Kentucky, New Jersey, Wisconsin and Wyoming did not respond to requests for comment regarding whether or not they are awaiting FEMA’s approval for six weeks of funds.

There are also concerns that FEMA funds intended for the LWA program payments will be used to help fight the wildfires raging across the West Coast, among other natural disasters, before all states have the opportunity to distribute six weeks of the $300 add-on benefit given.

A FEMA spokesperson said that wasn’t the case. “FEMA’s funding of ongoing recovery projects from previous as well as new disasters has not been affected by the COVID-19 pandemic,” the spokesperson told MarketWatch.

“ Last month, the Committee for a Responsible Federal Budget, a nonpartisan think-tank, estimated that the FEMA funds weren’t sufficient to fund more than five weeks of LWA payments. ”

Evermore is skeptical of that. “Who knows how fast it’ll wind down,” she said, referring to the FEMA fund. “With all the wildfires it seems like a big promise to make,” Evermore said, referring to funding six weeks’ worth of the $300 benefit for 49 states.

As for what nearly 30 million unemployed Americans could expect after the FEMA funds are exhausted, absent of any Congressional or executive actions, they’ll go back to receiving pre-pandemic amounts of unemployment benefits. In six states, the maximum amount of unemployment benefits one can collect equates to less than the $7.25 an hour federal minimum wage, CNBC reported.

“I’m terrified that Congress ignores this and then there’s another wave of COVID and layoffs,” Evermore said.

That could prove to be the case given that senators’ time in the coming weeks will likely be occupied by confirmation hearings for the next Supreme Court justice to fill Ruth Bader Ginsburg’s seat.

Trump tweeted TWTR, +7.09% on Tuesday that he will be announcing his nomination on Saturday.

: Aurora Cannabis lost more than C$3 billion in a chaotic year and the stock is falling
GLOBAL MARKETS-Dollar rises on hawkish comments; stocks end up
Comment

FA Center: Here’s what interest rates are saying about stock and bond returns for the next 5 years — the bulls won’t believe it