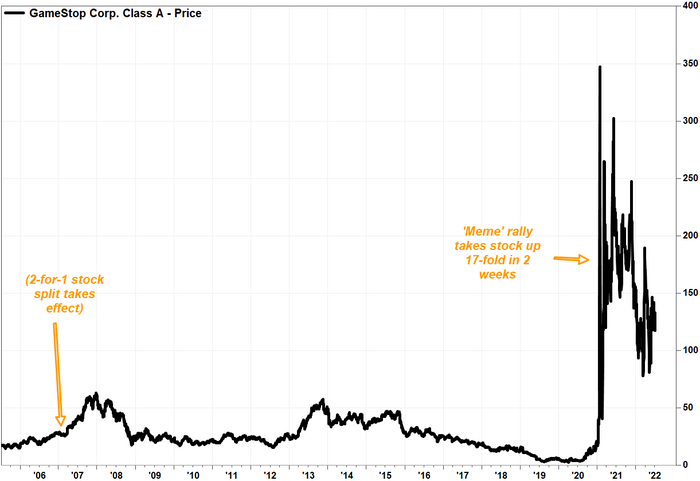 Shares of video game retailer GameStop Corp. continued their rally on Thursday, boosted by its board’s approval of a 4-for-1 stock split. Read More...

Shares of video game retailer GameStop Corp. GME, +12.53% continued their rally on Thursday, boosted by its board’s approval of a 4-for-1 stock split.

The stock split, which is only the second in the stock’s history, and its first since 2007, was first announced in March, although the split ratio was not announced at that time.

GameStop announced the 4-for-1 split ratio late Wednesday. At the close of business on July 18, 2022, stockholders of record will receive a dividend of three additional shares of the Company’s Class A common stock for each then-held share of Class A common stock, the company said. The stock dividend will be distributed after the close of trading on July 21, 2022 and trading will begin on a stock-split adjusted basis the following day.

Shares of the meme stock surged as much as 9.8% in Wednesday’s after-hours session, and extended those gains on Thursday. The stock was up 11.9% in recent afternoon trading, to bounce off the previous session’s six-week closing low.

Recent months have seen a lot of attention focused on GameStop’s efforts around non-fungible tokens. In May, for example, the retailer launched a digital wallet for cryptocurrencies and NFTs in an attempt to expand its offerings for the gaming community.

Opinion: GameStop shares soar 30% and take other meme stocks on a ride, after Reddit poster touts shares at a ‘58.2%’ discount

There are currently only two analysts surveyed by FactSet who cover GameStop, one with the hold rating and the other with a sell rating.