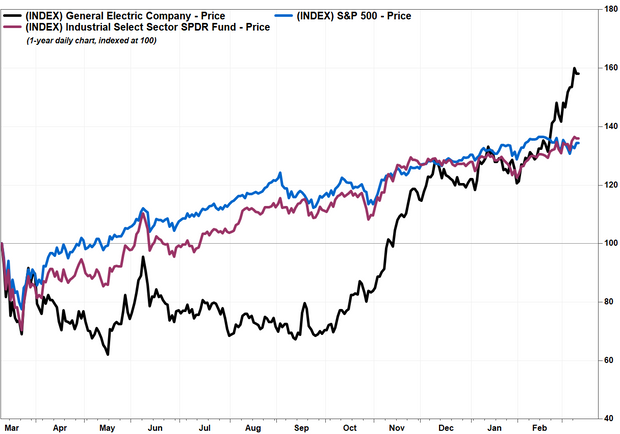 GE, which hosted an analyst meeting early Wednesday, also provided 2021 financial guidance, in which the range for adjusted earnings was a bit downbeat, but the ranges for revenue and free cash flow were in line with expectations.

The reverse split might surprise investors because they are usually reserved for companies concerned that their stock price could, or have fallen below, thresholds that might lead mutual-fund investors to shun the stock or prompt exchanges to issue delisting notices. Read more about reverse stock splits.

In GE’s case, the company said its board was recommending the reserve split, which will be voted on by shareholders at the annual meeting in May, given the company’s “significant transformation” over the past several years.

“The reverse stock split would decrease the number of shares outstanding to a number more typical of companies with comparable market capitalization,” GE said in a statement.

GE’s proposed reverse split would effectively multiply the stock price by eight, while reducing the number of shares outstanding to about 1.1 billion. If the shareholders approve the split, the split will go into effect at the discretion of GE’s board, at any time before the first anniversary of the May 4, 2021 annual meeting.

GE confirmed Wednesday a deal to combine its GE Capital Aviation Services (GECAS) aircraft leasing business with AerCap, in a deal that creates more than $30 billion in value for GE shareholders.

The Wall Street Journal had reported earlier this week that a deal was near.

Under terms of the deal, GE will receive $24 billion in cash and 111.5 million ordinary shares, with a market value of about $6 billion and representing a 46% ownership stake in the combined company.

GE said it plans to use the proceeds from the deal to further reduce debt, which would bring the total debt reduction since the end of 2018 to more than $70 billion.

“AerCap is the right partner for our exceptional GECAS team,” Culp said. “We’re creating an industry-leading aviation lessor with expertise, scale and reach to better serve customers around the world, while GE gains both cash and a meaningful stake in the stronger combined company, with flexibility to monetize as the aviation industry recovers.”

As part of its analyst day, GE provided details on its 2021 financial guidance.

The company expects full-year adjusted earnings per share of 15 cents to 25 cents, compared with the FactSet consensus of 25 cents.

For revenue, GE expects growth in the “low-single-digit” percentage range, while the current FactSet revenue consensus of $80.4 billion implies a 1.0% rise.

Free cash flow is expected to be $2.5 billion to $4.5 billion this year, which surrounds the FactSet consensus of $3.6 billion.

GE said its guidance is based on the assumption that the aviation market will start recovering in the second half of the year. GE assumes growth in the renewable energy market, an accelerating turnaround in the power business and sees an “attractive” health care market, with scans back to pre-COVID levels.

“We are on a positive trajectory in 2021 as momentum builds across our businesses and we transform to a more focused, simpler, and stronger industrial company,” CEO Culp said. “We are excited to shift more toward offense, investing in breakthrough technologies to serve the needs of our customers and the world—for more sustainable, reliable, and affordable energy; more integrated and personalized healthcare; and smarter and more efficient flight.”

Key Words: Man who called Dow 20,000 at end of 2015 says these are the 4 steps needed for a bona fide stock-market recovery